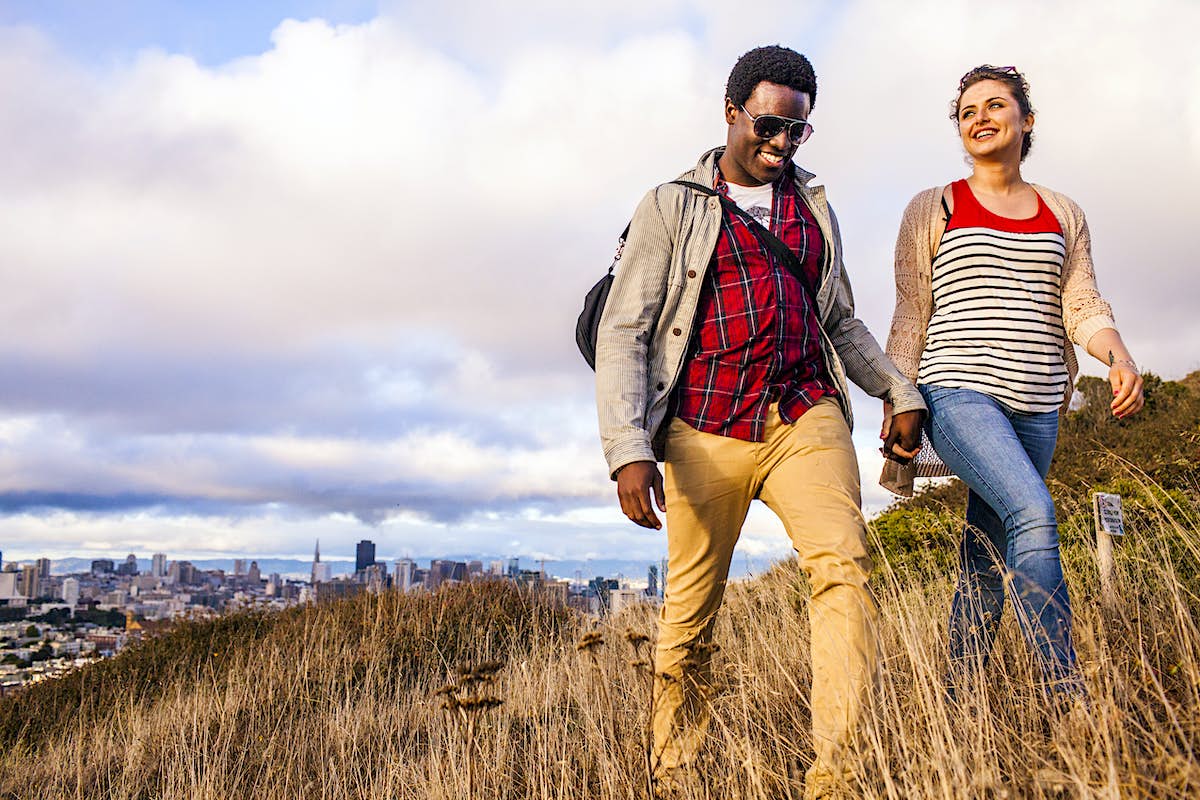 If the landscapes of each US state had their own Miss America-style competition, California would be a very serious contender for the crown.

Here are some of the best hikes in California, including not only some of the most popular trails but also a few that lead adventurers away from the crowds and into the wilderness, where experiences with diverse habitats and wildlife await.

Coast redwoods are the tallest trees on Earth, stretching more than 350 feet high and living for more than a thousand years. California is one of very few places to retain their majesty, and there are many redwood trails to choose from, but this one is simply a classic.

Despite its remote, far-north location in Jedediah Smith Redwoods State Park, numerous visitors brave the winding road through the forest and compete for limited parking at the trailhead. For the opportunity to wander this sometimes steep and uneven path among the towering, old-growth giants, it’s just worth it, and on clear days, the sunlight filtering through the canopy is pure magic.

Steven Spielberg filmed scenes for ‘Jurassic Park 2: The Lost World’ here, and for good reason. The gargantuan ferns climbing the walls of this yawning, 80-foot canyon are decidedly dinosaur-sized and so awe-inspiring is the verdant scenery that this place has been designated a World Heritage Site and International Biosphere Reserve.

Within Prairie Creek Redwoods State Park, Fern Canyon gets crowded in the summertime and the parking lot, which is accessed via a dirt road through the forest, can fill up. Note that the road can become impassable in wintertime, and definitely consider bringing footwear for walking in water: the trail intersects with a winding, pebble-filled creek and your lower extremities will likely get wet.

Lassen Volcanic National Park is California’s hydrothermal superstar, featuring four types of volcanoes including the world’s largest plug-dome. That’s the 10,457-footer Lassen Peak, which last blew its top less than 100 years ago and remains active. Yes, the most intrepid hikers now climb it.

Why would they do this? The sensational views over all of Lassen, including terrain devastated by eruptions and dotted with crystal clear lakes, for starters. But the trail also features rare alpine plants, snow patches and evidence of glacial episodes. While much of the park was impacted by the 2021 Dixie fire, this hike remains astounding.

Get more travel inspiration, tips and exclusive offers sent straight to your inbox with our weekly newsletter.

When engineers were building the Pacific Coast Highway they opted to bypass about 100 miles of rugged coastline, and this became California’s famous Lost coast. Serious hikers fly across the world to experience the total seclusion and epic scenery of this wilderness seashore, and many of them embark on multi-day journeys within the King Range National Conservation Area.

If long hours of beach trekking, timing the tides and scrambling over boulders sound daunting, the Lost Coast offers shorter and less difficult options. The sandy hike from Mattole Trailhead to the Punta Gorda Lighthouse and its amazing elephant seals can be done in a half-day, while trails on the coastal bluffs in Sinkyone Wilderness State Park often include sightings of Roosevelt elk. Note that reaching the trailhead of any Lost Coast hike will be part of the adventure.

San Francisco’s most enchanting hike leads its lucky travelers along the city’s northwestern edge, featuring iconic views of the dramatic coastline, the revered Golden Gate Bridge and the rugged Marin Headlands to the north. The path winds through wind-whipped cypresses and down romantic staircases, across coastal bluffs and over beach boardwalks. Tempting turnoffs lead to scenic overlooks and hidden coves.

History enthusiasts will also appreciate that this hike includes a Civil War-era fort at Fort Point and several WWII-era bunkers, including Battery Crosby, dotting the bluffs. Nearby are also the Sutro Baths, a massive indoor swimming complex built in 1896. It was quite the scene for Victorian dandies in rented woolen swimsuits.

There are two options here: The shorter and easier loop follows the Beach Trail out to the crashing sea and comes back on the Creamery Meadows Trail through idyllic grasslands formerly munched by dairy cows. But for those interested in vast and jaw-dropping coastal views and tranquil, shady woodlands, there’s a longer loop created by the Panorama Trail, Bluffs Trail and Ridge Trail. A lovely spur trail leads to an unspoiled hidden beach.

This quintessential Tahoe hike winds along the forested southwest shore of the region’s famous lake, offering astounding views of its depth, clarity and cobalt-y blueness. From the trailhead within DL Bliss State Park, the dirt path is lined with pine trees and boulders as it undulates over coastal bluffs, drops into secluded coves and finally collides with the lovely Emerald Bay State Park.

This stunner’s got history, too. Many hikers take the mile-long detour up to glorious Vikingsholm Castle, a shining example of Scandinavian architecture. There’s also a killer view of Fannette Island, a small dot of granite where widowed heiress Lora Knight would motorboat guests to a teahouse in the 1920s.

Yosemite is a wonderland of soaring granite and gushing water features, including North America’s tallest waterfall: Yosemite falls. Because it’s split into upper and lower falls, hikers can opt for an easy, paved route to a footbridge near the base of the smaller (but still 320-foot!) Fall. From there the views of both falls are spectacular and sometimes include a misting. The eastern portion of the lower trail is wheelchair accessible.

Bold and fit hikers will likely prefer the hike to the top of Upper Fall, a 2,425-footer whose summit offers incredible views of iconic granite slabs like Half Dome and Sentinel Rock, as well as Yosemite Creek and the valley below. The climb through oak woodland, exposed plateaus and steep and rocky terrain near the top is difficult but highly rewarding. Those who still want more can continue to Yosemite Point or Eagle Peak.

California’s Eastern Sierra is often overlooked. But high-alpine Little Lakes Valley is a must-hike for its series of postcard-perfect lakes lined in conifers and backed by jagged, snow-capped granite.

The trail runs parallel to Rock Creek, where you might catch sight of trout fishermen, and then dips through a glacier-carved valley, meandering through meadows, over footbridges, through lodgepole pines and along the shores of sparkling blue lakes. Do not forget to snap photos when you get a glimpse of those granite spiers reflected in the water.

Note that permits are required if you’re planning to camp in the John Muir Wilderness, which is a splendid idea.

This is one of those hikes that people in LA do multiple times a week, mainly because they love the 360-degree views of Greater Los Angeles (including some of its dazzling mansions). The natural environs are nothing to sneeze at either, as this trail offers scalable mountain peaks, a densely wooded canyon, a stream bed flanked with foxtail and a bridge over a seasonal waterfall. And beyond those city views, there’s of course the glittering Pacific Ocean.

Because this great hike is so close to Pacific Palisades and Santa Monica, it’s often pretty crowded. For a slightly less beaten path, take the detour to Skull Rock, a nifty rock formation with a stunning vista of its own.

Tucked away in the Agua Caliente Indian Reservation at the foot of the San Jacinto Mountains near Palm springs, this hidden oasis hike feels like a hallucination has come to life.

The beginning of the trail is flat, offering small boulders, yellow flowers and the occasional chuckwalla (large lizard). But soon hikers arrive at a creek formed by melting snow and surrounded by magnificent fan palms. Makeshift log bridges cross the creek as the path continues through an erosion-carved sandstone canyon, eventually culminating with a large pool fed by a seasonal waterfall. Mule deer and bighorn sheep sometimes bound in for a drink.

This delightful jaunt near San diego winds around Lake Poway, past needley conifers and giant metamorphic boulders, up a million stairs and over to a top-notch selfie spot: a thin slice of rock precariously extended and bearing an uncanny resemblance to a potato chip.

The summit is often crowded with people one-upping each other for the most absurd photo with the main attraction. Just wait your turn and do not do anything too stupid, as the fall would be around 20 feet. Other threats (or attractions, depending on your perspective) include rattlesnakes and mountain lions hiding amongst the chaparral and scrub oak. Stay alert!

This article was originally published October 13, 2020 and last updated December 2021.

https://www.youtube.com/watch?v=fS2KR9NYdIkAnthony Joshua looks forward to his rematch with Oleksandr Usyk, discusses the most exciting current boxers and his deal with DAZN. Subscribe to our...
Read more
MLB

MONTREAL, QC - If you've been looking for a place to get an inside look...
Read more
Load more