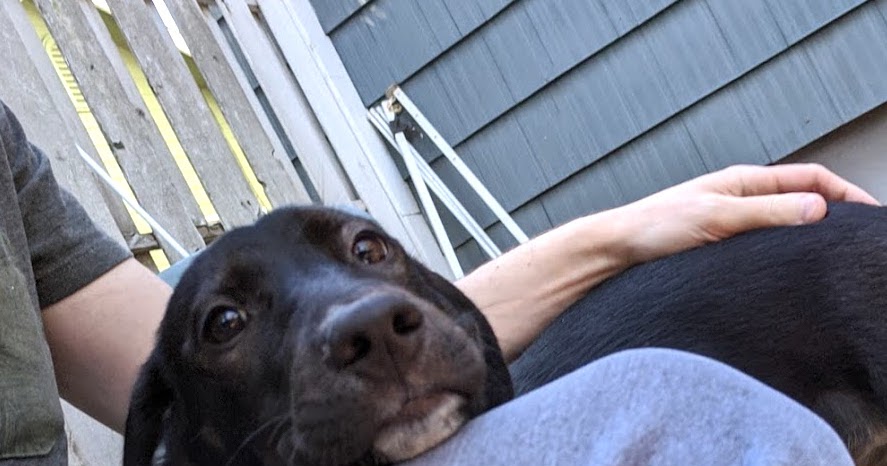 (This is a post I originally drafted back in mid 2000, I think, and for the sake of doing something different, thought I’d make it a “time capsule post” by scheduling it to be posted well in the future. So here it is, a year and a half later, the long-awaited return of this “ignorable filler post” series. LOL)

Mickey Mantle is # 9 in this oddball set. 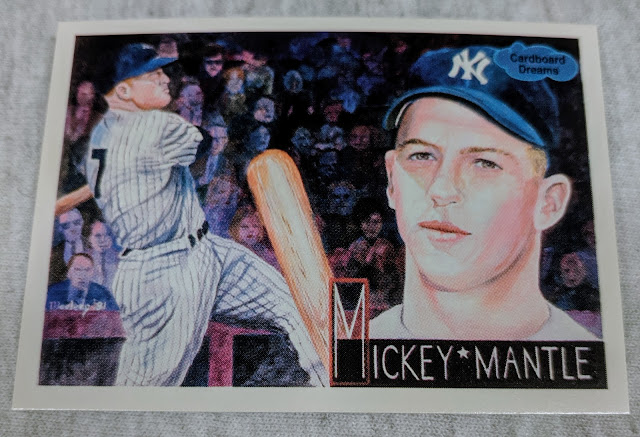 The action pic does not look much like him, but the headshot is a decent likeness. Maybe a little Edward Norton in there. 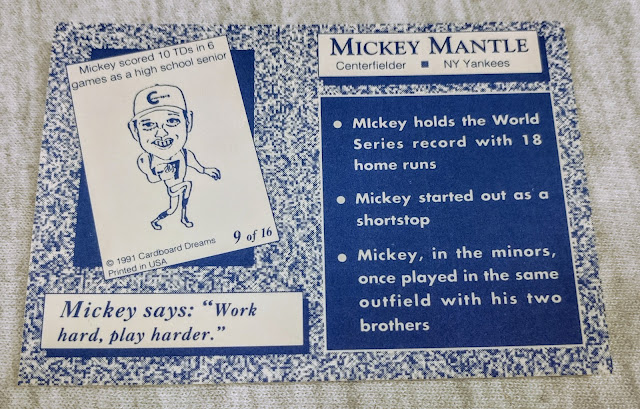 Always love the creepy doodles on the back. I did not realize he was a high school football star, but it’s no surprise.

– “Mickey holds the World Series record with 18 home runs”
Many old school postseason career records have fallen thanks to more rounds in the expanded playoffs these days, but this World Series record is still intact and no active player is anywhere close. Chase Utley with 7 is the closest anyone’s gotten in recent decades. Mickey’s other standing WS records include most walks (43), extra base hits (26), RBI (40), and runs scored (42).

– “Mickey started out as a shortstop”
He played in 7 MLB games at short (just 1 start, in 1954). As far as other infield action, he also got into one game each at 2nd base (1 inning, also in ’54) and 3rd base (4 innings in 1952). But otherwise he patrolled the outfield most of his career (mostly in center), then 1st base for his last couple seasons.

– “Mickey, in the minors, once played in the same outfield with his two brothers”
I was not able to find much more about this tidbit, but there were 3 Mantles who played for the 1954 McAlester Rockets: Maxie Mantle, Ray Mantle, and Roy Mantle. No Mickey, though.

As for me, he was before my time, but Mickey Mantle was a mythic figure when I was a kid. He was the favorite player of my best friend Doug’s dad, which helped build up the legend for me even more. I know describing feelings is tough, but man, Mickey had a special feeling.

Once I got back into card collecting as an adult, scoring myself a vintage Mantle was a top priority. My first “big” card purchase (3 digits) was a sharp ’64 Topps Mantle. Then I followed that up with a fuzzy corner ’65 and a beat-up ’57 (still my oldest card of his) and then a ’68, and then a ’69 (as part of a ’69 Topps lot). More recently I picked up a slabbed ’63 Topps Mantle at a card show last year. I’d love to one day complete a Topps base card run for him, but of course that ’52 throws a wrinkle. And his ’53 Topps is pretty tough too. (No ’54 or ’55 Topps card released.) And I hate his ’56 Topps card (I think he looks like a creepy ventriloquist dummy on it). But a 1957-1969 run is a realistic goal for me. I used to try to land one need per year, but got a little relaxed in that pursuit lately. Bored “Covid Collectors” (investors) got prices running a bit high these days, but I’ll eventually add another vintage Mantle along my quest. 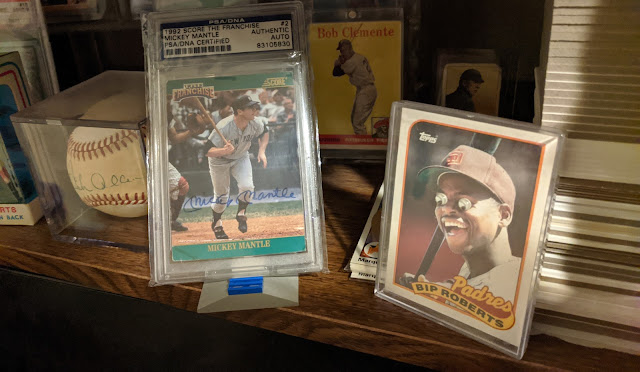 But the pride and joy of my Mickey Mantle collection is this Score certified autograph I picked up a year ago. Love it!

(This whole post was drafted up earlier this month, but waited on taking this photo here later in August 2020 to be published.)


Now’s the time of the ignorable post when I drunkenly ramble on about stupid shit. 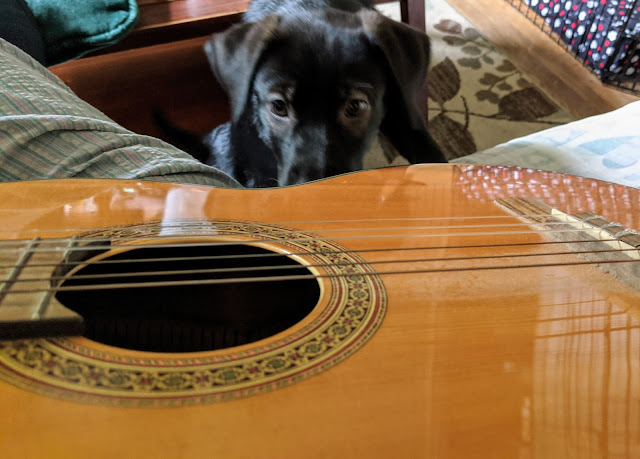 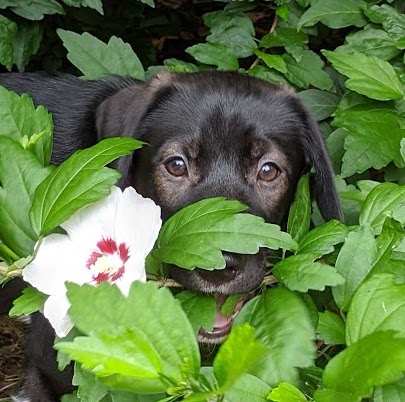 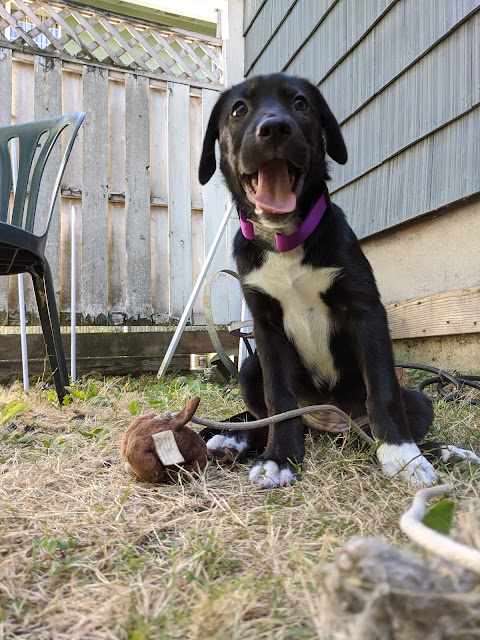 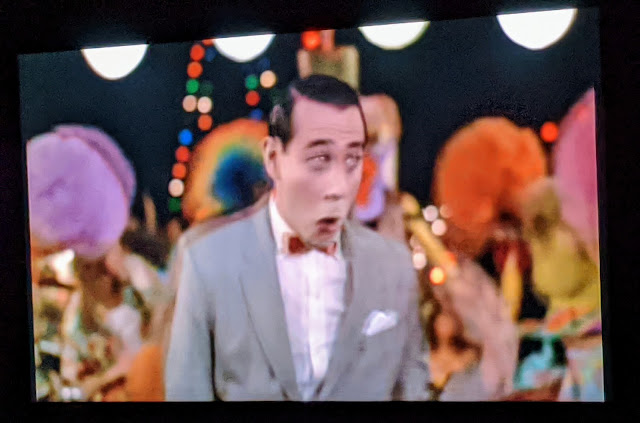 Back to the Beach is one of my favorite summertime flicks. It’s cheesy as hell, but I love it so. The random Pee-Wee scene is the cherry on top. 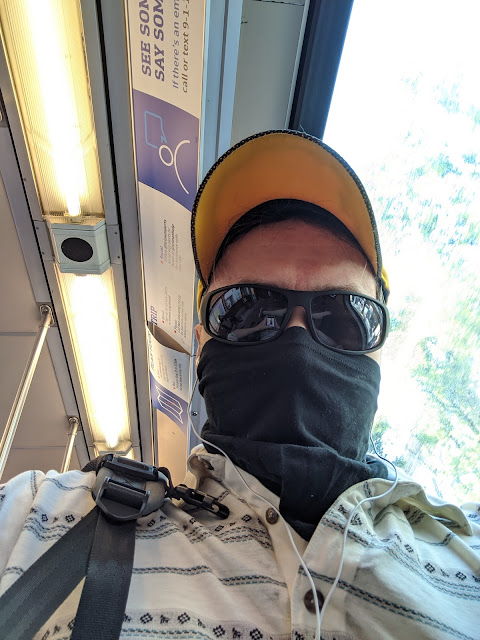 Look at this tough antifa motherfu * ker!
Nah, it’s just me! 🙂
I forgot my mask when I got dropped off at work. Luckily I had a spare pair of (clean) underwear in my desk that worked as a mask in a pinch on my ride on public transportation on my way home.


You might be saying to yourself, wow you must shit yourself a lot to have backup underwear on hand, but no, the thing is in the winter I often wear long underwear (“lounge pants”), so the back up briefs are just in case I need to change into something for my workout shorts. Sigh .. I miss my 2:30 workouts, catching Pardon The Interruption in the work gym. Haven’t “worked out” in months, though keeping active with bike rides (to the post office for work) and often running around dealing with this shitty dog.


But I have some good updates for you!


My old buddy who was probably moving up to Portland? (ref)


Yes, he did move up to my current home of Portland!


My attempt to get my 1991 MusiCard blog included on the popular sports card blogroll? (ref)


Yes, he did finally add my blog to the popular blogroll!


My attempt to get Johngy to comment on my blog? (ref)


So there are 3 nice “wins” for me to revel in. I should have done a giveaway contest to celebrate, but I’ve just been so busy / stressed lately that I do not want to take on too much. (Missed celebrating my blogoversarvy this year too.) Seriously, do not be surprised if I get struck down by a heart attack or something one of these days. Hopefully my wife will be able to pass on the news to my cardboard homies. I do not want to create any mystery about it if it happens. But if I do not post for a month, assume I’m dead. I would never go a month without a post. Never!


But no, I’m just being a diva, do not listen to me. I even have to make my favorite movies more stressful than they need to be.

Thanks to @ Extension765 and @disnalldat, I now have a thing I do where I give my favorite movies a “remix” when I watch by playing them in black & white with only audio from Trent Reznor scores. It’s weird and I kinda love it. pic.twitter.com/eqTJZvUhso 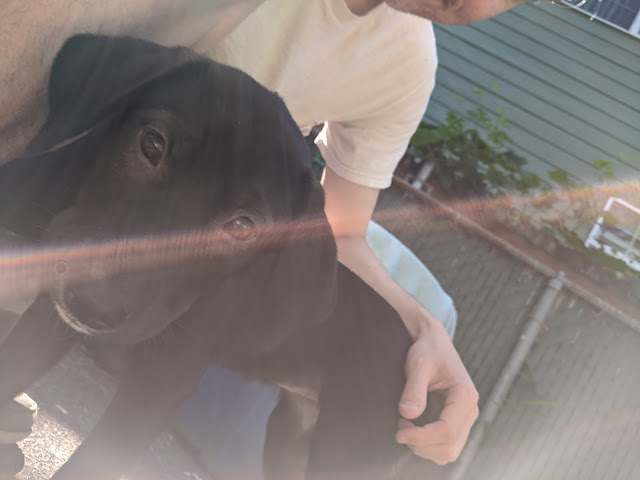 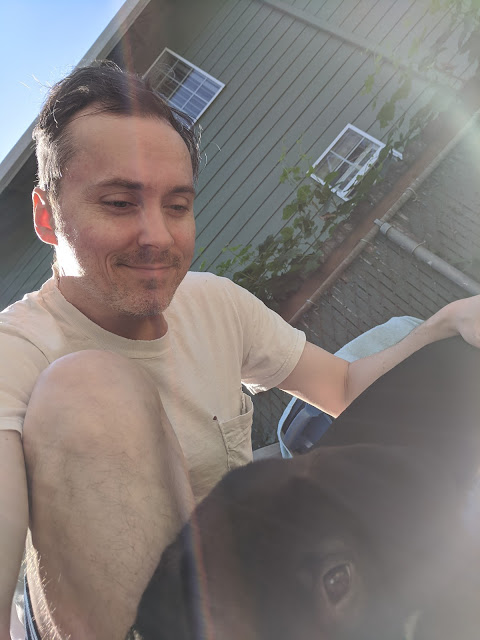 This dog is a lot of work.

ps UPDATE: I put another Ruby pic at the top on today, 9/25/2020, because I was sick of looking at that poor artistic rendering of Mickey Mantle as the thumbnail picture for this draft at the top of my Blogger post list because this post is scheduled for many months from now, so it’s gonna be there a long time. So I’d rather it be a cute pup to look at. Maybe I’m tough on Ruby, but she’s getting better and I bet by the time this post is eventually published I will think she’s a good girl and love her a bunch. But we’ll see. Hello from 2020. 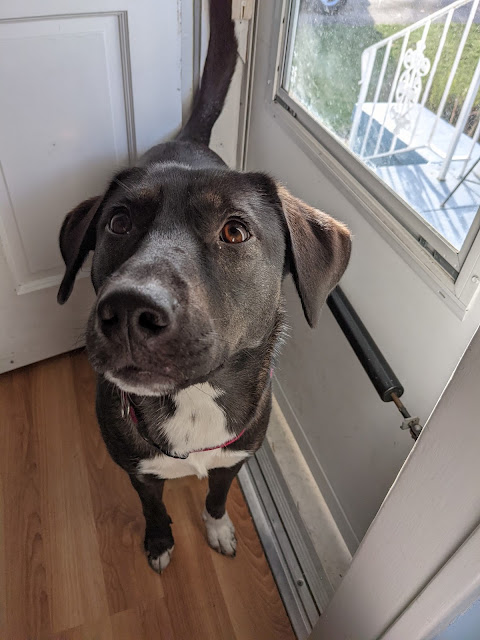 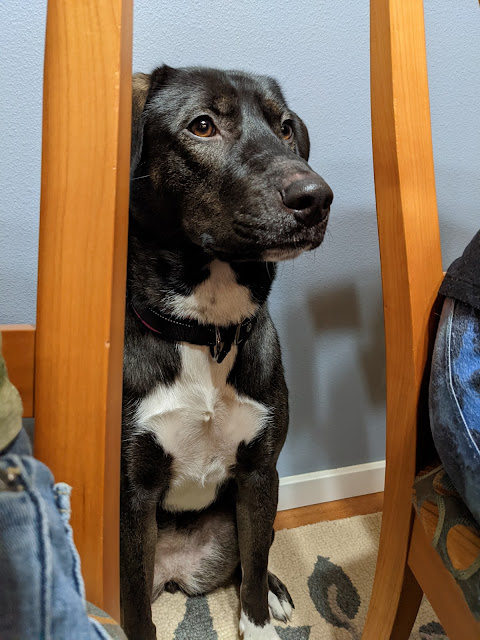 On high alert for scraps at my birthday / Christmas Eve dinner. (Great cut of beef this year.) 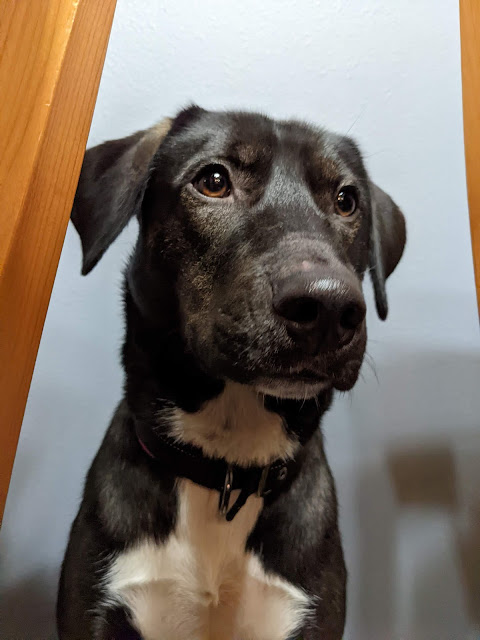 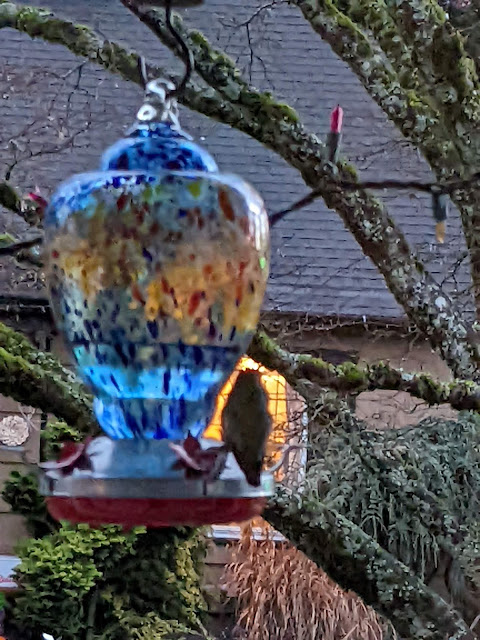 In other animal news, after closing for the summer, my hummingbird hangout is back open for business now that the temperatures have dropped. 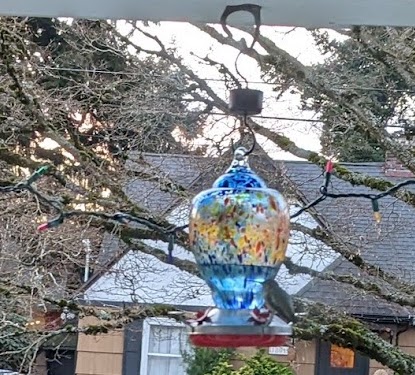 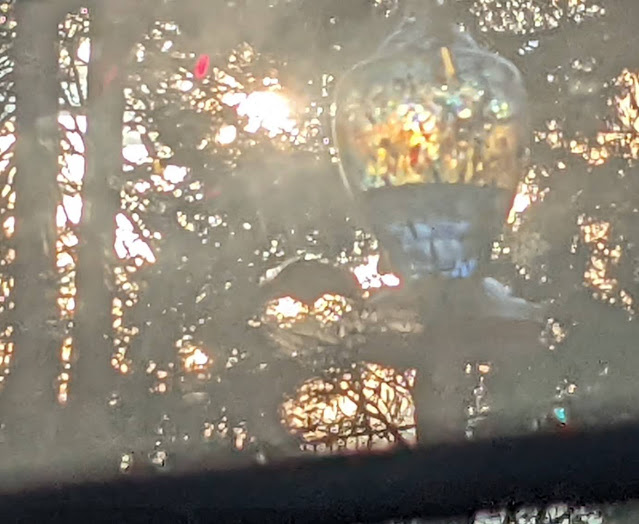 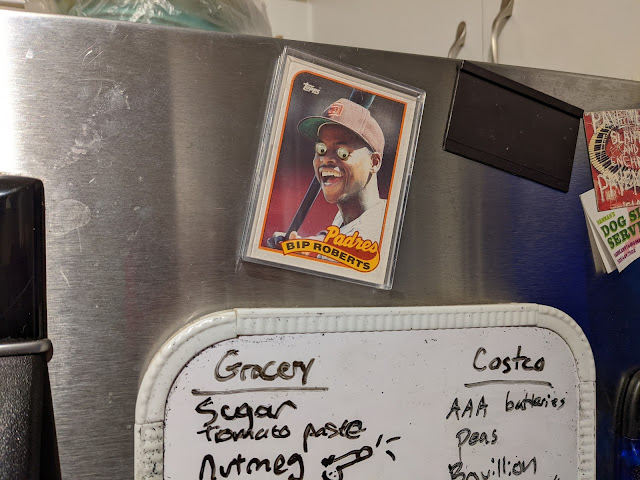 The googly-eyed Bip featured earlier in the post has since been turned into a fridge magnet. It’s fun. 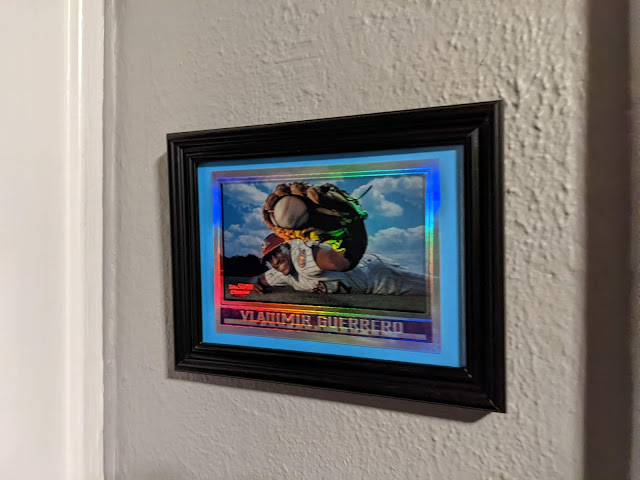 I’ve still got this jumbo refractor on the wall and it always makes me smile when I notice it.

That’s it for this post. While I’d like to eventually cover all 16 cards in the crazy little set, it’s anyone’s guess if / when the next in the ignorable filler post: 1991 Cardboard Dreams series ever comes out, but stay tuned! Or do not! LOL

WBA / IBF bantamweight world champion Naoya “Monster” Inoue is 17-0 in world title fights and only once has been pushed to the...
Read more
MLB

Fantasy Baseball News - May 17, 2022 Willson Contreras was the driving force behind Chicago's 9-0 win over Pittsburgh on Monday, going 2-for-5 with...
Read more
NFL