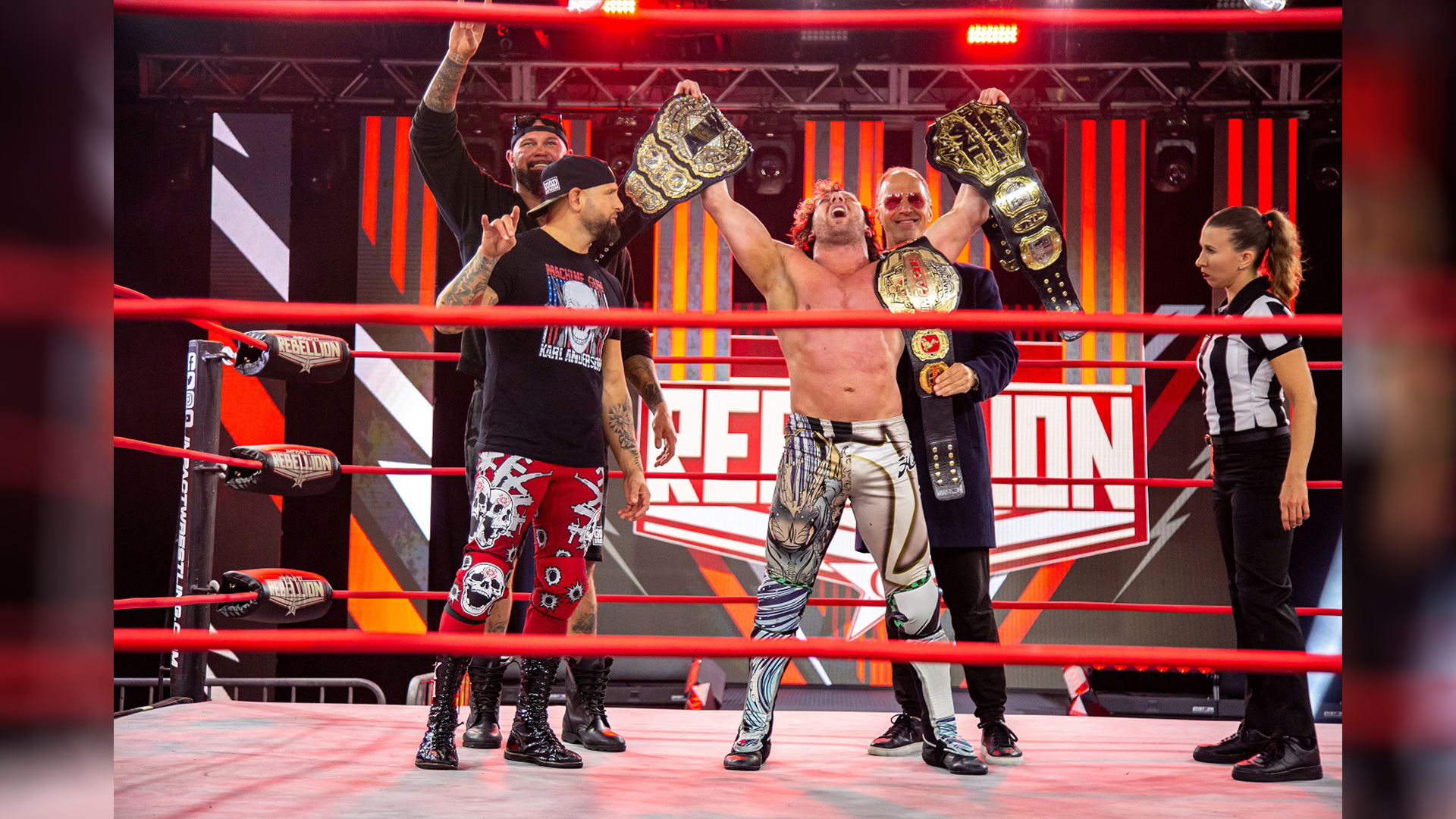 Stream every pay-per-view from 2021 on IMPACT Plus

Kenny Omega’s arrival in IMPACT sends shockwaves all through the wrestling world. Omega made his in-ring debut at Hard To Kill as the team of him and The Good Brothers faced the trio of Rich Swann, Moose and Chris Sabin. Despite an impressive fight from the IMPACT trio, Omega pinned Swann and set in motion a historic title match. Swann would survive a difficult challenge against Moose at Sacrifice before an even bigger challenge was coming. At Rebellion in April, the IMPACT World Champion Rich Swann would face AEW World Champion Kenny Omega in a Title vs. Title match.

With Mauro Ranallo on the call as a special guest announcer, both Omega and Swann walked into the tense encounter knowing one man would walk out empty handed and the other would hold the World Championships of two major promotions. Swann gave it his all but it was once again the One Winged Angel that put him down – making AEW’s Kenny Omega the IMPACT World Champion. Omega would retain the title against Moose and Sami Callihan before losing it to a surprising opponent. On the debut episode of AEW Rampage, Christian Cage ended Kenny Omega’s reign with a Killswitch – adding an IMPACT World Title to the NWA World Title he previously held in TNA. Christian had successful defenses against Ace Austin and Brian Myers before running into a man that took the X-Division by storm.

After the departure of Ethan Page, Josh Alexander went solo in IMPACT pursuing the X-Division Title. Josh captured the gold from TJP in a three way that also featured Ace Austin and went on one of the best runs with the title in history. Josh defended the title against Ace Austin, El Phantasmo, TJP in the first 60 Minute Iron Man Match in IMPACT history, in Ultimate X at Slammiversary, against Black Taurus, Jake Something and X-Division icon Chris Sabin. Every single match was a classic, every single match stole the show as Alexander proved beyond all doubt that he was one of the very best in the world.

After a message of support from Chris Sabin at Victory Road, Josh Alexander uttered two very famous words: Option C. Alexander declared his intention to forgo the X-Division Title in order to challenge Christian Cage at Bound For Glory. Despite Christian’s attempts to get in Alexander’s head, Josh defeated “The Instant Classic” at Bound For Glory to prove he was the best beyond all doubt. Josh’s reign would be short lived though as Moose called his shot to end Alexander’s reign in mere minutes. Trey Miguel would then win the vacant X-Division Championship and hold the title for the remainder of the year.

The Forbidden Door was swinging open constantly in 2021 – but not just for wrestlers from AEW. For the first time in a decade, stars from New Japan Pro Wrestling appeared in IMPACT. FinJuice won the Tag Team Titles, El Phantasmo challenged for the X-Division Title, the legendary Satoshi Kojima battled Violent By Design, Bullet Club leader Jay White made a shocking appearance at Slammiversary to confront The Elite, Minoru Suzuki faced off against Josh Alexander in a dream match – never before had so many stars from New Japan appeared in IMPACT.

Kenny Omega wasn’t the only star to go between AEW and IMPACT. The Good Brothers would become a weekly fixture on AEW television, while stars like Matt Hardy and Private Party as well as IMPACT legends like Frankie Kazarian and Christopher Daniels would appear often on IMPACT. Slammiversary was once again shrouded in mystery as stars like Thunder Rosa, Chelsea Green, Mickie James, Jay White and No Way popped up to surprise everybody. It was the beginning of a truly unprecedented amount of cross-promotional activity.

Eric Young’s Violent By Design group made a huge impact on the tag team division in 2021. NJPW stars FinJuice defeated The Good Brothers to capture Tag Team gold but Young’s allies Rhino and Joe Doering called their shot to take the titles from FinJuice. VBD used their numbers advantage to hang onto the gold until Slammiversary where The Good Brothers regained the titles and held them for the remainder of the year. Notably, the titles were also defended on an episode of AEW Dynamite as The Good Brothers retained against The Dark Order team of Evil Uno and Stu Grayson.

2021 continued to be the year of Deonna Purrazzo as she made successful title defenses against Taya Valkyrie, the legendary ODB, Jazz in a Title vs. Career match, Tenille Dashwood, Rosemary, Havok, Thunder Rosa and Lady Frost. She even added the AAA Reina de Reinas title at TripleMania to become Champ Champ. However, Deonna immediately had issues with the returning Mickie James. “Hardcore Country” and “The Virtuosa” did not get along culminating in a title match between the two at Bound For Glory – as Mickie became champion once again, holding the title for the rest of the year. The Knockouts World Tag Team Titles were also revived – with Fire N Flava becoming the new champions as Decay, Jordynne Grace and Rachael Ellering, and The IInspiration also held the titles in 2021.

Other notable events from 2021: Awesome Kong was inducted into the Hall of Fame at Bound For Glory. Eddie Edwards defeated Sami Callihan at Hard to Kill in the fourth Barbed Wire Massacre match. Matt Cardona made his shock debut at Hard To Kill before engaging in a rivalry with his old partner Brian Myers. The monstrous W. Morrissey debuted at Rebellion and dominated IMPACT for the year. Steve Maclin arrived in IMPACT with a chip on his shoulder, going undefeated for months. The Super X-Cup returned for the first time in four years with Ace Austin joining Dezmond Xavier, Samoa Joe and Chris Sabin as winners. The all-Knockouts Knockouts Knockdown event returned in October.

Do not miss Slammiversary LIVE June 19th on pay-per-view

Tom Olsavsky is the vice president of research and...
Read more
Load more