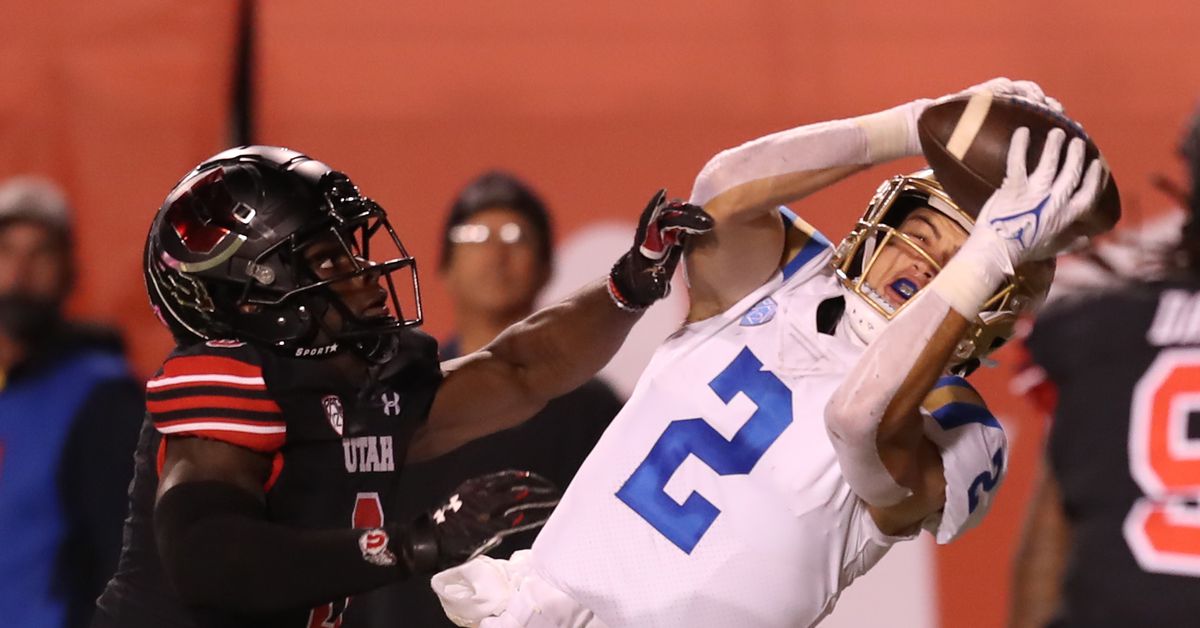 There really is nothing that stands out about UCLA wide receiver Kyle Philips – Physically, at least.

He certainly is not the biggest receiver on the field, nor will he be the fastest or most explosive. Philips is not a flashy receiver and he will not scouts – or the media – buzzing with freakish measurables.

But Kyle Philips has been impossible to ignore on the field. He was the talk of the practices before the 2022 East-West Shrine Bowl, and one of the players who helped himself the most in the game itself. Philips is just one of those players who does his job, does it well, and does it every time. His job is often to keep the offense on the field and moving forward, and he’ll do whatever is asked of him to accomplish that task.

Philips will almost certainly fall below some teams’ measurable thresholds, and likely fly below the radar because of that. Could he be a hidden gem for a team like the New York Giantswho need pass catchers?

UCLA’s Kyle Philips is a quick, agile, savvy, and above all else, tough slot receiver prospect.

Philips aligned all over UCLA’s offensive formation, from both outside receiver positions, to the slot, to the backfield as an H-back. That said, his primary role was as a slot receiver for the Bruins’ offense.

Philips is a very savvy receiver who makes full use of his considerable quickness and agility. He has a varied set of release strategies, allowing him to get a clean release against multiple types of coverage.

Philips is very difficult for defenders to predict as he plays with a great understanding of how to use all phases of his routes as weapons. He can fire off the line of scrimmage with a sprinter’s burst or cross up a defender with swift footwork like a point guard on a basketball court. Philips does a good job of pressing the stem of his route vertically into the defender whenever there’s a vertical component to the route. He also uses a variety of fakes at the top of his route to force hesitation and give himself an extra beat of separation. Philips has great quickness in and out of his breaks, aided by smooth footwork that limits unnecessary steps or stutters.

Philips has solid ball skills at the catch point. He locates and tracks the ball well downfield, and tailors his routes to maximize his catch window. He tries to flash his hands as late in the rep as possible, extending only as the ball arrives, to minimize the amount of time a defender has to react.

Philips’ primary role in the UCLA offense was as a blocker, and it’s a role at which he excelled. He plays much bigger than his size and was frequently used as a lead blocker for UCLA’s running game. It was not uncommon to see Phillips pulling from his slot or an H-back alignment, across the offensive formation, and laying a block for his running back. He seems almost eager to block for his teammates, is a willing hitter, and strains to sustain his blocks for as long as possible.

That said, Philips’ size is a limiting factor. At 186 pounds and with arms that measure under 30 inches, he can simply be overwhelmed by bigger defenders. He should not be asked to block linebackers or even bigger safeties. Philips can struggle in contested catch situations as well, as bigger defenders can just play around him. Likewise, he has a limited catch radius and depends on the scheme and his route running within that scheme for his separation. Philips profiles as a “quicker than fast” receiver who can burn defensive backs in a short area, but is not able to run away from more athletic defenders.

Philips has generally good hands, but he had some drops in the tape viewed. Given the overall inconsistency of the quarterback play, it’s fair to wonder if the blame should be placed on the quarterback rather than the receiver.

Kyle Philips projects as a starting slot receiver in a modern offensive system.

Philips was something of an afterthought in UCLA’s offense – which was very much a “run first” attack with a quarterback who looked for big plays or running lanes. At the NFL level, Philips should be a great fit for a team that uses West Coast, Air Raid, or Erhardt-Perkins principles. He would be a more awkward fit for a team that relies heavily on iso routes as opposed to route combinations.

His route running is a legitimate weapon and he can be used to both take advantage of schemed separation and to create traffic for defenders. Philips is at his best in the intermediate area of ​​the field, where he can use his route running and quickness to their greatest effect.

Many coaches will likely fall in love with Philips run blocking and general competitive toughness. He seems to relish contact and never hesitates to take on defenders. He also refuses to go down easily as a ball carrier and treats the catch as the start of a play.

However, there will be teams who simply will not look at Philips due to his measurables. His size – 5-foot-11, 185 pounds, with 29-inch arms and 8-inch hands – will likely come down below thresholds for some teams, and that will likely knock him down draft boards.

Philips is a receiver that does the little things well and is good at the actual mechanics of playing the receiver position, but he just isn’t flashy and will be outshone by bigger – or better – athletes.