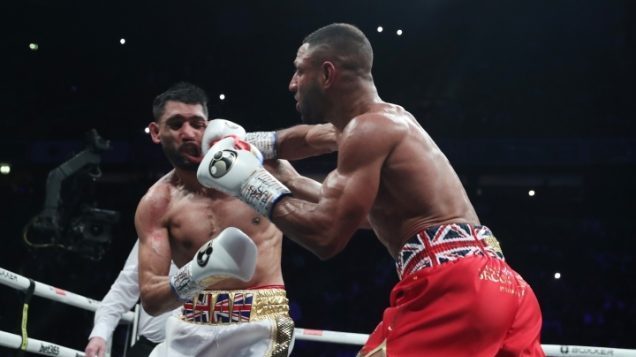 Human beings are disgusting, pattern-seeking animals attempting to find order in an increasingly chaotic world. Having our expectations met and our biases confirmed helps us feel, if momentarily, that something somewhere is in control.

This is, of course, pure fantasy and we are all going to die alone, most likely in a horrific shaving accident, but there’s temporary solace to be had in knowing that when you push the button the thing comes out or whatever. Or that when you pull the handle the doo-doo goes bye bye. Or, as it pertains to the matter at hand, if you take a fist-shaped object and get it anywhere near Amir Khan’s chin he’s going to dance a jig that resembles an alcoholic rodeo clown rollerblading over a landmine while getting his dick gnawed off by rats.

If boxing were cinema, Khan (34-6, 21 KO) would be the Jackass franchise. And as anyone who knows me understands, that is the single highest honor I can bestow upon someone. You can have your Citizen Kanes and your Casablancas and your 12 Angry Men. Take em ‘. They’re all yours. Just leave me the Beehive Tetherball stunt from Jackass 3D and we’ll both go home happy. Sure, Shakespeare wrote some decent comedies but he never came close to writing anything as funny as “Is Butterbean OK?”

Art and entertainment exist on two separate planes, and the point at which they intersect is coincidentally located on Amir Khan’s chin.

If you’re reading this I assume you like boxing. I guess I do too. Sort of. But if you know who holds what alphabet belt or which fighter is with which promoter or, god forbid, how purse bids work, then buddy, you and I do not like this sport in the same way. If you want to make something as awesome as dudes punching each other feel as boring as filing your taxes while a Tool album plays in the background, be my guest. But do me a favor and leave me the fuck out of it. You worry about network ratings and PPV buy numbers and us cool people will revel in the predictably unpredictable insainty of fighters like Amir Khan who deliver both hilarity and brutality in equal doses. It’s pure, it’s uncut and it’s fun as hell.

Khan is, if nothing else, an emotional exhibitionist. Both in and out of the ring, he simply cannot refrain from drawing attention to his own shortcomings. His public airing of personal laundry feels almost pornographic in its shamelessness. What most folks would be hesitant to tell their closest confidants, Khan tweets out for all the world to see. There’s a thin line between lovable, heart-on-your-sleeve vulnerability and ostentatious psychological debasement and Khan could not find it with a map. That’s why we love him.

Inside the ropes, Amir Khan fights play out like the best Jackass stunts. You see the setup, you know the outcome, you watch it unfold in real time and yet the payoff is exhilarating.

“Holy shit, they’re gonna rock that dude in the nuts and it’s gonna be awesome.”

Which they did, and it was.

The book, so to speak, has been out on Khan since Breidis Prescott comically mummified him back in September of 2008. Since then, there have been big wins and even bigger losses but every opponent who stared across the ring from Khan in the ensuing 13 years has had the same thought; tap his chin and the fight is yours.

This had to be what was going through Kell Brook’s head as he made his way to the ring Saturday night at the Manchester Arena in Manchester on an ESPN + televised card.

Brook (40-3, 28 KO) and Khan have been circling each other for the better part of a decade. The Sam and Diane will-they-won’t-they dance finally come to pass, albeit when both were 35 years old and waving to their primes from a disappearing shoreline. Nonetheless, two of the biggest stars in British boxing were finally going to meet and both were dragging a burlap sack full of physical ailments to the ring with them.

Would Brook’s scotch-taped-together eye sockets hold up against Khan’s quicker hands? Would Khan’s papier-mâché chin and 31 months of ring rust do him in against a hungry Brook? It would not take long to get an answer.

As the two fighters made their way to the ring *, the stakes of this grudge match started to sink in. Barring some kind of late career renaissance, one of these two delightful bastards would likely not be an active prizefighter come morning. For a perceived “seniors tour” type of fight, there would be very real repercussions.

*Fun Fact: When two UK fighters are squaring off, they have an Austin Powers impersonation contest to determine who gets to walk out to Sweet Caroline. The Brits are a mostly criminal class but they’re sticklers for the rules.

Once the opening bell finally rang, it took about 90 seconds for the thing that everyone knew would eventually happen to, you know, happen. A short right hand from the outside by Brook gave Khan ants in his pants and my friends, it was ON. For the rest of the round Brook followed Khan around the ring like a barfly chasing a waitress for a drink at last call.

Have you ever seen those videos of a giraffe being born and attempting to walk right when they come out? That’s what watching Amir Khan getting punched is like. Except, you know, always. His legs go berserk in a desperate attempt to communicate with his brain while his arms flail like they’re fending off a swarm of imaginary bees. All the while, Khan himself is as much an observer to this process as we are.

For all his vast physical gifts and in-ring IQ, Khan never learned how to tie his opponent up or even to take a knee. He gets tagged and his mind stays awake long enough to watch his body slowly descend to the sunken place. You practically set your watch to it once the first big shot lands.

To his credit, Brook never took his foot off the gas. He knew as well as Khan did that it was only a matter of time. As he landed lead hooks and short uppercuts to the Khan-shaped corpse in front of him, the sense of satisfaction was readily visible on his face. Years of shit-talking and crass insinuations were about to culminate in an extremely satisfying knockout if he could just get this rubber-legged lunatic in front of him to go down.

Ultimately the referee would do the job for him, calling a halt to action at 51 seconds of round 6. It was an anticlimactic ending as one of Khan’s cartoonishly exaggerated falls looked to be in the cards but nonetheless, the outcome was the same.

With the win Brook extends his career and at 35 could still score a couple of big paydays to retire on. Names from rematch with Bud Crawford to Chris Eubank Jr. have already been bandied about but both may be a bridge too far for a fighter who’s suffered the physical damage Brook has in his career. Wherever he goes from here, he’s earned everything that’s coming to him. He’s a credit to the sport, not just in the UK but worldwide.

On a personal note, if this is indeed the end of the road for Amir Khan, my interest in this sport will likely wane by at least 20%. You can say what you want about him – as many have and will continue to do – but he was an electrifying talent with an even more electrifying and obvious shortcoming. To have his skill set and be cursed with a self-destruct button located squarely on your chin is nothing short of tragic. Somehow though, he turned it into an asset.

Whenever a notable fighter leaves the sport there are countless hyperbolic send-offs cataloging what they gave to the sport and what the sport took from them. Normally they’re mindless, overly-poetic platitudes that ring hollow at best. But in Khan’s case they will not feel shallow. At least not to me. This sport is run and watched by unforgiving assholes who love nothing more than to kick a fighter when they’re down. And Khan was down a lot. Yet he kept making the walk from the dressing room to the ring, knowing full well he was never more than a glancing blow away from being turned into a meme, just as he was in his losses to Prescott, Canelo Alvarez, Danny Garcia, Crawford and almost certainly now against Brook. Ridiculing Khan became a cottage industry of sorts over the years and we all put some money into the machine.

But here’s the thing; it does not matter. When appraising any type of art, the question isn’t “Is this good or bad?” Rather it’s “How does this make me feel? ” And Khan made people feel a lot. Anger, excitement, shame, love, spite, pride. All of it. To mistake his shaky chin for weakness is folly. He’s a tough guy in a tough sport watched by tough-to-please fans. Watching him ply his singular brand of trade was a pleasure and a blast.

Amir Khan entered the professional boxing ranks as an Olympic hero and the pride of Great Britain. If this past Saturday night is in fact the end of the road, he has left it as something even better: a jackass.

There’s nothing more you could ask of a fighter than that.