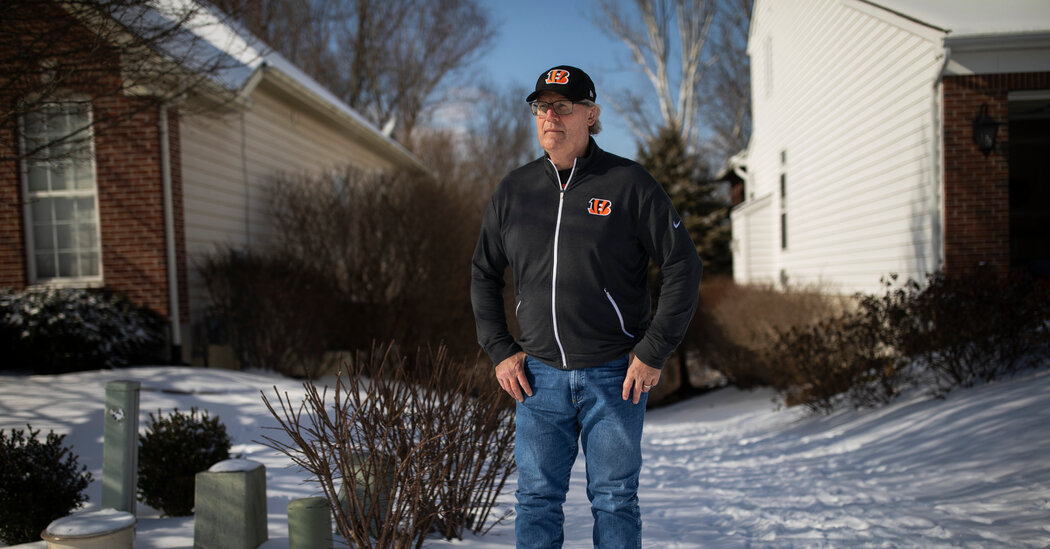 CINCINNATI – Tim Krumrie walked into the restaurant wearing a black Bengals cap and a shirt emblazoned with the logo of the Super Bowl he did not finish. His left leg – the one he fractured in three places, in perhaps the grisliest injury in Super Bowl history – is all healed. Of course it is. It has been 33 years.

The more noticeable appendage is his hands. Krumrie does not shake people’s hands so much as he engulfs them in a clamp. They hoisted 75-pound anvils in the Bengals’ weight room. They grappled with double-teaming offensive linemen. They pushed a snowblower through the Wisconsin slush in the winter of 1989, mere weeks after surgeons implanted the 15-inch stabilizing nail inside his tibia.

Last week, from across a half-circle booth, Krumrie extended those same hands. One cradled his iPhone, the other swiped through photos until he found images of his brain, captured in August 2015. Splotches of blue, stains of green.

Those colors, revealed by nuclear imaging that shows how blood courses through tissue, indicated a lack of blood flow to affected areas of the brain. His doctor, having only read the scan, asked Krumrie whether he had been having mood swings and balance issues, sleeping difficulties and memory loss – symptoms common among players who hit, and were hit, as often as Krumrie did across his 12 years in the N.FL.

Yes, Krumrie said, he did.

For him and other NFL retirees, blows to the head – or “getting dinged,” Krumrie’s preferred euphemism – were just an inconvenience during his playing days. Their accumulation, though, has meted out a brutal truth: brain trauma. Krumrie has acknowledged the consequences of his outstanding career and accepted them. He has also resolved to destigmatize talking about brain injuries.

“It’s a humbling experience to say, ‘Hey, I have a problem,'” said Krumrie, a two-time All-Pro nose tackle. “You’re supposed to be a tough guy. This is reality. My reality is I see that and I recognize that and I address that. Just like my leg, I addressed it. And I won. ”

Krumrie harbors no regrets toward football’s role in his health. He would break his other leg, he said, merely to play in another Super Bowl – not even to avenge Cincinnati’s loss to San Francisco at the end of the 1988 season. All those football games, he won or lost. Either he tackled the running back or he did not. Those were binary propositions. The brain, when damaged, does not fully heal. So Krumrie (pronounced KRUM-rye) has managed his symptoms by adhering to routines.

He stopped drinking Diet Coke and alcohol. He reads every day – books about Jerry Rice, Vince Lombardi and Brett Favre, who, Krumrie noted, came to start in Green Bay, in 1992, because Packers quarterback Don Majkowski injured his ankle on a Krumrie sack.

Before trips to the market, he photographs what he needs to buy. He writes Post-it reminders. Krumrie also continues to wear, for maintenance, a device he likened to a football helmet without a face mask. It transmits infrared light into his skull to improve blood flow.

After the first of 30 treatments, he said, names and memories flooded back. His hands flipped to another set of images, taken the last time he had the nuclear imaging, called a Spect scan, in December 2015. Much better. More gray filled the screen. The blemishes, though still present, had receded some.

“Some guys can not talk about it,” Krumrie said. “Am I a tough guy? Put me in a ring with anybody – today. That mind-set is still there. Can I do it? No. But my mind says I can. ”

The Cincinnati Enquirer detailed this phase of his life in December 2017, a few months before he and his wife, Cheryl Krumrie, left Steamboat Springs, Colo., where they loved to ski and snowshoe and bike, and relocated to the Cincinnati area. Back to the embrace of old friends. Back to the familiar.

“We could surround Tim with people he’s known for a really long time and who are accepting and willing to let that stuff go by,” Cheryl said of the move. “And he feels very safe around them, like he does not have to pretend he’s something he’s not.”

Only those who know Tim Krumrie well, she said, sense a difference. He still conveys the same traits that defined him in his football-playing prime. “Timmy could eat nails and spit them out,” Jason Buck, a former Bengals teammate, said – now, at 61. Krumrie works out for two hours every day. A staccato laugh punctuates stories and sentences.

The Bengals’ turnabout from 4-11-1 to AFC champions has invigorated Krumrie, though he still forgets things, like he did en route to the Arrowhead Stadium complex ahead of this year’s AFC championship game. As he and Cheryl drove past Kansas City’s training facility, she asked if he remembered it, since he coached there for four years. Nope, he said.

But on other days, he will recall anecdotes and names and words that he thought had been lost forever.

“He has stayed pretty steady,” Cheryl said. And I’m happy with that, because there’s no getting better. There’s no recreating and making the brain right again. I’m just looking to stay in the same place. Being status quo is fine with me. ”

When Evan McPherson’s overtime field goal propelled the Bengals to the AFC title, the Krumries, guests of NFL Commissioner Roger Goodell, rejoiced. In a quiet moment in the suite, their son, Dexter, told Cheryl that a Bengals win in the Super Bowl against the Los Angeles Rams would provide Tim Krumrie with closure.

When Cheryl relayed that, Krumrie said he was going to cry: He hadn’t thought about it like that. He was just looking forward to scouting the Rams’ position groups to see how the Bengals measured up. He was certain they would beat Kansas City, but knew he could not control the outcome.

On last week's SmackDown, Raquel Rodriguez had what she considered the biggest match of her career as she faced Ronda Rousey for the...
Read more
BOXING

Ever dreamed of getting Android apps from outside the official Amazon Appstore on your Fire TV device? You can, in a process...
Read more
Load more