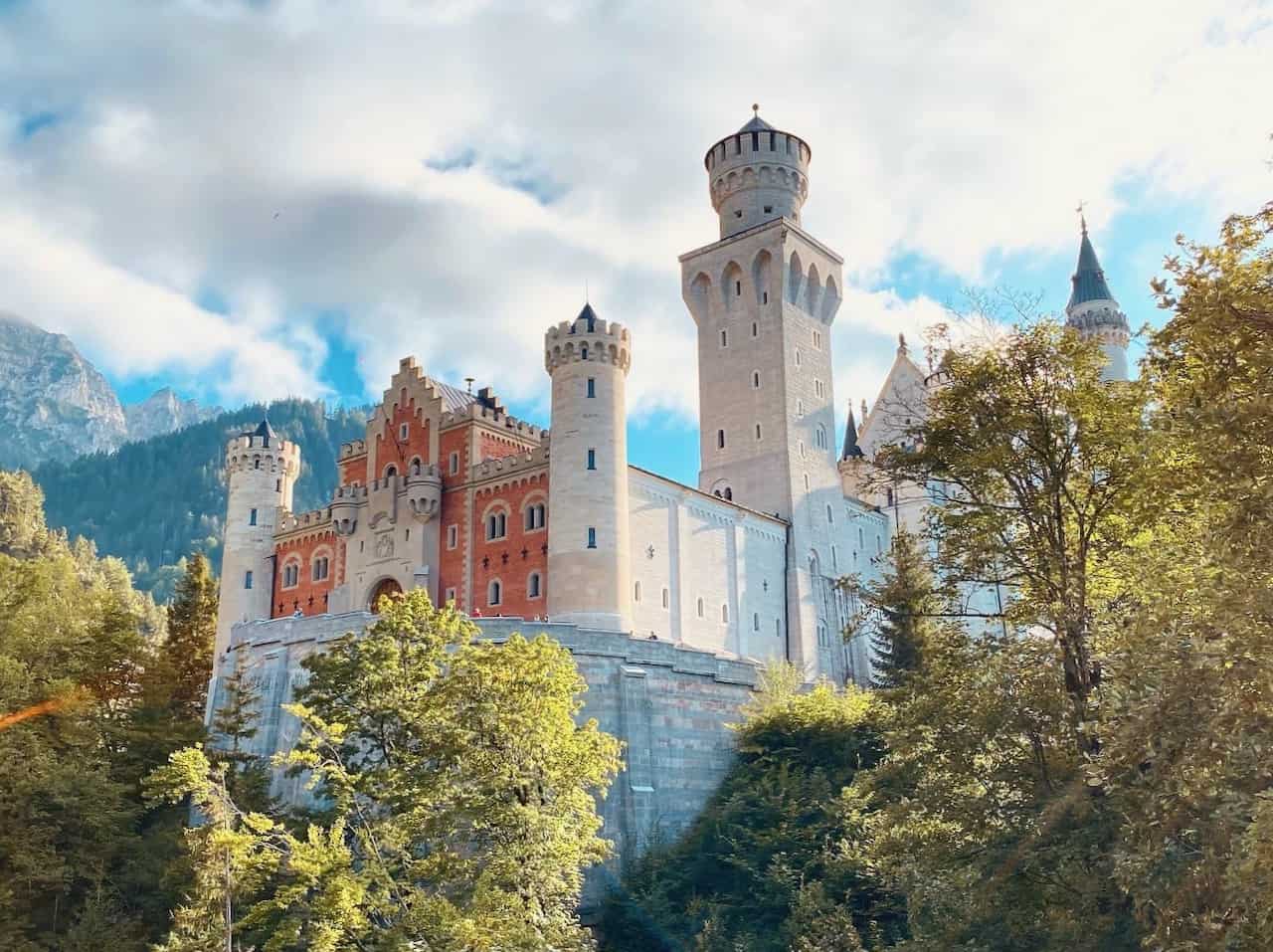 The beautiful Alpine borderlands of southern Bavaria are home to some of Germany’s most beloved historical sites. The wooded mountains, with their rugged ridges resembling the backs of dragons, lush valleys and glistening lakes, make for picturesque scenery. Against this beautiful backdrop are the castles of King Ludwig II. ‘Mad’ King Ludwig lived in the 19th century, but his legacy of fairytale monuments continues to delight visitors to this day. The King Ludwig II castles I visited are Neuschwanstein, Hohenschwangau and Linderhof, which are relatively close to each other about a two-hour drive south of Munich. His last masterpiece, Herrenchiemsee Palace, which I have yet to visit, is located southeast of Munich.

Neuschwanstein, Hohenschwangau and Linderhof can be visited fairly easily in a day, but I recommend taking more time to explore the surrounding area. In addition to the beautiful Alpine scenery, there are other small towns and historical sites that are worth more than a visit. I recommend renting a car to visit the castles and discover other interesting places on a 2- to 3-day road trip. Here’s what you can see on a self-drive tour through King Ludwig II’s castles south of Munich:

The epitome of over-the-top 19th-century Romanticism, it’s easy to see why Neuschwanstein is the most famous of King Kudwig II’s castles. The design of Neuschwanstein, with its many towers and lush interior, was inspired by medieval castles and Wagner’s operas – a combination that romanticized the Middle Ages. Built on the foundations of two medieval castles, Neuschwanstein took 17 years to build and was completed in 1886.

The best views of Neuschwanstein Castle

Neuschwanstein is especially known for its iconic views from various places higher up in the surrounding mountains. Reaching these vantage points requires a hike, which can be quite steep in places. Probably the best view is from the Marienbrücke (Mary’s Bridge). It’s a pretty narrow bridge and it’s very popular, so I suggest you get there early. Follow the purple marked route from the castle. If you fancy a longer walk, continue past the Marienbrücke – the road turns into a dirt road – and you will soon find several views that are much quieter, but that offer amazing views.

In the valley there are also several places where you can enjoy a beautiful view of the castle. Follow the Schlossstrasse to find these places.

Neuschwanstein is about a two-hour drive from Munich, making a day trip possible. If you do not have a car, I recommend going to a full day tour which includes transport and a guided tour of the castle. Note that it is only possible to tour the castle as part of a guided (group) tour. You can also combine Neuschwanstein with Linderhof in a tour. Either way, I recommend booking your place on a guided tour in advance to avoid disappointment. There are only a limited number of tickets sold at the ticket office every day and it tends to sell out very quickly.

Situated on top of a low hill not far from Neuschwanstein, Hohenschwangau was built by King Maximilian II, Ludwig’s father, in neo-Gothic style and was completed in 1836. The young Ludwig spent a large part of his childhood here. From his bedroom window he could see the ruins of the two medieval castles, and a while later, the building of Neuschwanstein on the same site.

After its completion, the Hohenschwangau Castle became the summer residence of the Bavarian royal family, who also spent time here when they went on their hunting trips. The interior of the castle is lush, with painted walls, extensive decorative ceilings and exotic furniture.

Linderhof Palace may be the smallest of King Ludwig II’s palaces, but its spectacular location, surrounded by mountains, beautiful gardens and lush forests, makes it my favorite! Furthermore, in addition to the palace itself, there are several smaller structures on the palace grounds that are simply awesome. King Ludwig II lived many of his last years in Linderhof, surrounded by fantastic, exotic interiors.

Linderhof, built between 1863 and 1886, was designed in the Rococo style and strongly influenced by Versailles in France. It even has a smaller version of Versailles’ famous Hall of Mirrors. Some of the highlights of Linderhof include the palace (Schloss) itself, the beautiful gardens, terraces and fountains, the Cave of Venus, the Moorish Kiosk and the Moroccan House.

Between Neuschwanstein and Linderhof

Linderhof is about an hour’s drive from Neuschwanstein. There are two routes you can follow: a slightly shorter route through Austria, or the northern route that stays within Germany. If you choose the northern route, there are several places to visit along the way:

Wieskirche is an important pilgrimage church built in the 18th century. Wieskirche, a UNESCO World Heritage Site, is an oval-shaped rococo-style church. The church is located in a beautiful Alpine valley and boasts an exuberant interior with extensive frescoes and decorations.

Oberammergau is a historic town known for two things: wood carving and its The passion plays (performed since 1634). It’s a lovely place for a walk and a meal. There are also numerous shops and lumber mills to visit.

For something a little more exciting, check out the Alpine Coaster, located just outside Oberammergau. It is the longest all-weather toboggan run in the world. The 2.6 km track starts at 1 258 m high and winds down the mountain. More information here.

Not too far from Oberammergau lies the Ettal Abbey, an impressive structure and one of the largest Benedictine monasteries in Europe. Ettal Abbey was founded in the 14th century. A fire destroyed much of the abbey and church in 1744, but it was rebuilt in a lush Baroque style. The church, with its spectacular dome, is a must-visit!

If you are driving from Munich to Neuschwanstein / Linderhof, consider stopping in the town of Polling to visit the amazing columns of STOA 169, a cool art project. Read more about STOA 169.

While they are nothing but helmets and shorts practices, the Dallas Cowboys are getting their first look at the full roster...
Read more
Technology

If you are in search of a MiFi the Airtel M4 4g MiFi might just be the best for you. When searching...
Read more
SOCCER

Check out the players with the best winning percentage

In the NBA, winners get immortalized over anyone else, pretty much like in every other sport in existence. As such, we decided to take...
Read more
Load more