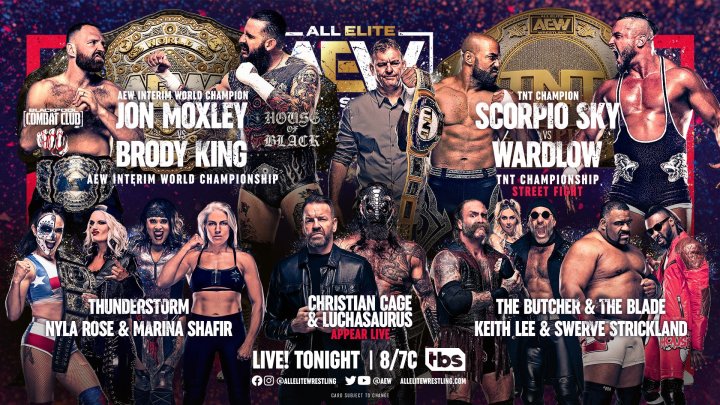 It’s Wednesday, you know what that means! It’s time for another AEW Dynamite episode, this time from the home of Mr Brodie Lee, Rochester, New York. We’re a week removed from Blood & Guts but we still have so much in store tonight including matches for the interim AEW World Championship and the TNT Championship, the latter in a street fight. So, with that in mind, and Excalibur, Taz & Tony Schiavone on commentary, let’s get straight to the wrestling!

Wardlow vs Scorpio Sky w / Dan Lambert, Ethan Page and 5 others in a Street Fight for the TNT Championship

We’re starting off with one of those mentioned title fights as Wardlow starts Dynamite followed by Scorpio Sky and a whole gang of American Top Team. He has Lambert, Ethan and 5 nameless others and they come all the way down to the ring. The bell sounds and Sky fires in some leg licks and gets Wardlow in the corner with body shots but Wardlow muscles out and drops the champ with a big Shoulder Tackle. Scorpio Sky retaliates with a low blow but Wardlow recovers with a big German Suplex and then he beells sky across the ring twice. Scorpio rolls out of the ring and Wardlow goes to retrieve him. Lambert touches Wardlow to distract him and the goons ringside join in to allow Sky to take Wardlow and throw him into the ring steps before the goons all beat Wardlow down as we go to break. Wardlow heads back inside but the damage is done and Sky takes over from here. Wardlow comes back, using his power out of the corner to knock Sky down and then attack him in the corner as the crowd asks for tables. Sky pokes the eyes and kicks the knee of Wardlow to regain control but and Wardlow ends up charging into the ring post as he tries to retaliate.

We return to the action and both men end up on the top turnbuckle, Wardlow wins from up there and hits an absolutely huge Senton. Wardlow sets Sky up for the Powerbomb symphony and Dan Lambert sends the goons in. Wardlow deals with all of them one at a time and throws them all out then tosses the last one into the pile. Meanwhile, Sky recovers, grabs the belt and hits Wardlow in the face but Wardlow still kicks out at 2! Sky tries for the TKO but Wardlow then tosses Sky into Lambert on the apron then nails him with a Spinebuster. The Powerbomb symphony finally begins as Wardlow hits the first and then the second and third in quick succession before pinning Sky with ease to become the new TNT champion.

Christian heads out and he’s followed by Douche-asaurus, I mean Luchasaurus. They enter the ring and Cage says everyone wants answers and thinks they deserve them. Before he can continue, he’s interrupted by Matt Hardy of all people. Matt tells Christian he’s the Michael Jordan of being an asshole. Matt says Jungle Boy was his friend and did not deserve what Christian did. Christian says Matt does not know Jungle Boy like he or Luchasaurus did and Matt is making his brother seem like the sober one. The whole crowd start asshole chants and Matt says Christian is using Luchasaurus like Matt used Private Party and Butcher & Blade. But Matt says he regrets that and maybe his last month has been karma but he’s here to stop Christian using Luchasaurus. Christian says Matt is here to make himself the big star and will use anyone to get his name out there and Matt is only out here to be near Christian. Christian says Matt is the embarrassment to the Hardy Family and then Hardy and Christian fight but Luchasaurus takes over with a headbutt and throws Matt into the ring steps, kicks him into the ring post and puts him through the Timekeepers table.

Next up we head to tag team action and this match was set up across Dark Elevation & Rampage last week as commentary inform us. The bell rings and Keith Lee and The Blade start us off and Blade slaps Lee so Keith responds with a headbutt. Blade tags out and Butcher is the weaker and smaller man for once and Lee beells him off the top rope. Butcher rolls out mad as hell and grabs a chair but Blade stops him. Both teams make tags and Blade and Swerve go at it, making a botchy start to their tussle but they manage to get it back with Swerve tripping blade then bringing in Lee to shoulder tackle Blade. They tag again and Lee delivers the two-handed chop on his way out. Swerve ends up with Blade on the outside and heads out to kick him but Bunny gets in the way then Butcher deals with Keith Lee on the apron and charges at Strickland. Swerve manages to low bridge Butcher but Blade sweeps his legs out to send us to break. Butcher & Blade spend the break isolating Swerve in and around their corner and making frequent tags.

We return to the match and Butcher and Swerve are on the top rope where Swerve wins out by biting Bucher then elbowing him down and hitting a diving uppercut. Keith Lee tags in and hits Butcher and Blade with splashes before tossing the latter into the former. He knocks Blade into his corner and makes the tag but Butcher fights back. Swerve hits him with a Flatline and we get a Double Team from Swerve in our Glory but then Blade pushes Swerve into Keith’s move before Blade hits Lee with a Cutter and then Butcher & Blade manage to isolate Swerve but Keith makes the save. This turns into a four-man brawl before Keith and Swerve hit the Stomp / Spirit Bomb finish on Blade to get the win.

Powerhouse Hobbs says that Lee & Swerve are pissing them off, he’s followed by Ricky Starks who says they could have ended their careers but they’ve played real nice but they’re not doing it anymore. Ricky gets super worked up screaming about who the best tag team is and out comes the Young Bucks who thank Ricky for the introduction before reminding everyone who created this company. They then remind both teams they lost at Double or Nothing before offering a three-way tag team title match. The crowd chant FTR and Nick shuts them down. That match next week.

Eddie heads out and we’re reminded about the finish of Blood & Guts. Tony Schiavone asks Eddie about Jericho. Kingston congratulates Wardlow, then his Blood & Guts team including Claudio. Eddie says Jericho made him a liar by not bleeding and he’s going to get him. Jericho appears on the big screen and he’s in the back where he gets Tay Conti to break Ruby Soho’s arm in a car door.

It’s Rochester so out come what’s left of the Dark Order and Negative One. They head to the ring and the crowd chant for Brodie. John Silver starts by saying Rochester is Dark Order country. Evil Uno takes over and says they have important news and he thanks everyone for showing up and supporting Dark Order but the six of them are here to stay because Dark Order is forever and this is a new era. He passes the mic to negative one to start the new era and QT interrupts him before he can talk. He offers a fight to the 10-year-old but then Hangman’s music hits. Out comes the Cowboy who beats down QT with Evil Uno. Uno is sent into the ring where Silver, Reynolds and 10 take QT down. Finally Negative one gets a chance to talk. He says he could pin QT right now but he’ll wait till he’s 19. WATCH THIS HAPPEN IN 2031!

JR joins commentary for the second hour of Dynamite and then Penta comes out with Alex for the next match. He’s followed by Rush as well as Andrade & Jose. We start the match with a big-time strike exchange between the two men before they struggle for position. Penta gets a roll up and a superkick to send Rush outside. Penta follows and they go back and forth on the outside before Penta hits an Arm Drag then goes for a Tope Suicida but Rush interjects with a forearm. Rush uses the corners to splash Penta before a Dropkick earns him a weak two count. Rush tries to pull off Penta’s mask but Penta fights back with two Slingblades. Rush rolls out and Penta follows him with a Tope Con Hilo. Alex Abrahantes brawls with Jose and brawls up the ramp with Fenix ​​and Andrade in tow as we go to break. Rush hits a dropkick back in the ring for a two count and then takes over, swarming Penta in the corner and using submissions throughout the break.

We return to the match and Penta fires in a chop which starts another strike exchange. Rush hits a German Suplex, Penta hits a Backstabber and then Rush hits a Powerslam for two as the men go back and forth. Penta hits a better Backstabber this time and only gets a two count before yet another strike exchange ensues. Rush hits a huge Headbutts and then Penta fires back with his own before Rush hits rising Knee for a double down. They both rise in opposite corners and Penta avoids a splash before they exchange position and chops. Rush wins out and then heads up top for a huge Missile Dropkick for 2.9. He heads up top once again and hits a Senton for another 2.9. Rush fires in an Elbow before Penta hits a rolling cutter and a Superkick before hitting the Fear Factor but Andrade puts Rush’s foot on the rope. As the ref tries to work out what happened, Rush low blows Penta and takes his mask off before rolling him up for the win.