Are The Ravens Legit 2022 Contenders? 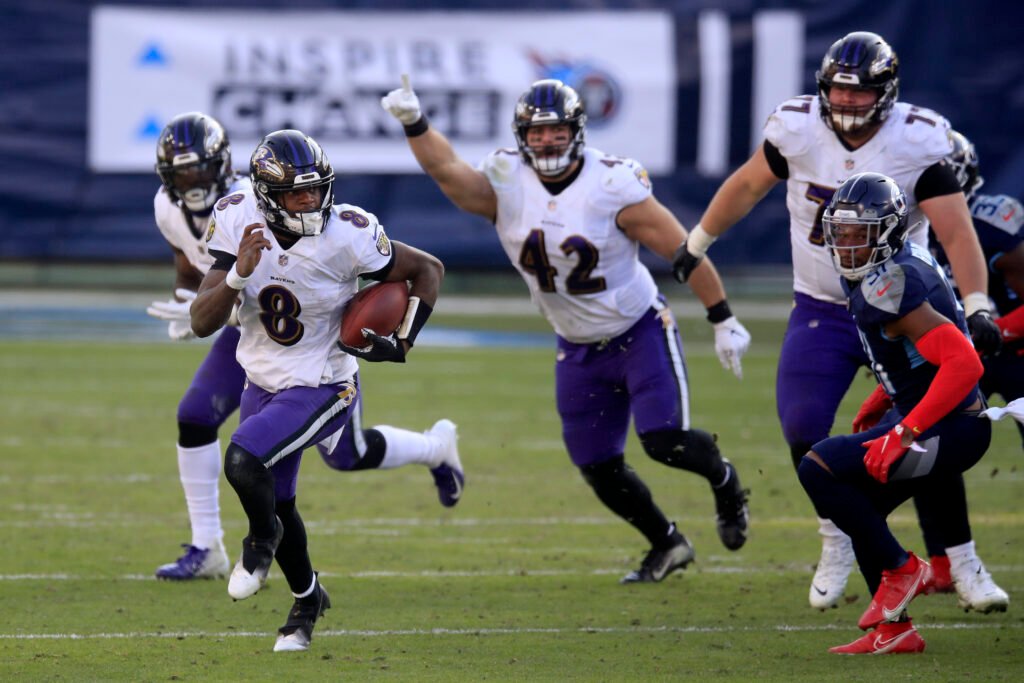 Now that the NFL’s elimination tournament has pared things down to the final two teams, it’s natural to wonder if the Ravens are capable of finding themselves in this position next season.

We saw an injury-addled Ravens squad topple the Chiefs this season, and give the Packers and Rams all they could handle. Sure, they got boat-raced a couple of times by the AFC-representing Bengals, but… yeah, I got nothing. The Bengals gave the Ravens a pair of wedgies this season, and it’s futile to project a scenario where the good guys would have won either one of those games.

But this is a year-to-year league, comprised of week-to-week chapters, and teams can go from the outhouse to penthouse, or vice-versa, at a moment’s notice. By watching the performances of this year’s playoff teams, we can see certain trends, and by comparing those trends to what could be for the purple and black next season, we can make some guesses. Sure, we hope they’re educated guesses, and we’ll try our very best to offer those types of guesses, but at the end of the day, they’s guesses.

If the shoe fits, ride it

How many of these playoff games have been won or sent to overtime with stone-cold clutch kicks of varying distances and under difficult weather conditions? We talk about the drives downfield, and the quarterbacks who led them, but a lot of these games have ultimately been decided by the prowess of kickers.


Let’s go ahead and give a big check mark to the Ravens on this one, as Justin Tucker is arguably the best to ever do it, and has shown no signs of slowing down this season. Extra credit goes to the rest of the special-teams unit here, as the Ravens consistently have an advantage in this part of the game nearly every single week.

Passers rock, but so do the catchers

It’s long been true that this is a quarterback-driven league, as evidenced by field generals like Bart Starr, Terry Bradshaw, Joe Montana and Otto Graham taking home significantly more hardware than, say, Kyle Boller. That has only increased over the past two decades, as rules helping quarterbacks and offensive play in general have afforded advantages to offenses in the air game.

But judging by several performances in this year’s playoffs, pass-catching playmakers are also taking advantage of both modern rules and individual excellence to flip games at a moment’s notice. How many times have we seen an explosive play from Cooper Kupp or Ja’Marr Chase or Tyreek Hill or Travis Kelce or Mike Evans or… well, pick your poison? The guys catching the rock have swung the balance of games with a play that shocks the senses or obliterates the best-laid plans of defensive coordinators.

Do the Ravens have playmakers who can make something happen in an instant?

Marquise Brown is certainly explosive, but I see him more as a guy capable of making a play than as a consistent playmaker. Mark Andrews, in my opinion, did become a playmaker this season, as evidenced by his improved run-after-the-catch skills and his ability to present a clear target on third down when everybody in the stadium knows where it’s going. He instantly gives the Ravens an advantage every time he steps on the field.

But the wild card here, in my opinion, is Rashod Bateman. Last year’s first-round pick displayed some moments of brilliance in his rookie campaign, and provided an impression of a guy who looks like he’ll be able to take an occasional seven-yard slant and turn it into a 65-yard score, as well as a player who can take a corner down the sideline and “out-want-him” to the ball. Time will tell there. Time almost always tells eventually.

The Ravens really need Rashod Bateman on the field as often as possible, he makes things happen.

How has it taken this long?

Let’s present a second wild card, if you’ll indulge me. What if JK Dobbins can take some of that contact balance, leg drive and quick feet of his to his advantage this season in the pass game? John Harbaugh spoke earlier this week about making some changes to the offensive system, and an obvious one would appear to build out a competent screen game to offset these quick, attacking defenses that can sometimes frustrate the Ravens. A safety outlet that could unleash a “shock play” now and again out of a dump-off or screen, can flip the field just as well as a big-bodied receiver running a “9.”

Cover with numbers, not with a stop clock

Departed Ravens defensive coordinator Don “Wink” Martindale played with a style that involved having talented corners limit the space of opposing receivers while a constant barrage of blitzers coming from every angle filled running gaps and forced quarterbacks to make quick decisions. It was mostly effective until, well, those talented corners got hurt, opposing offenses went to quick-developing passes and some of the young crop of quarterbacks would break “contain” and buy time for their receivers to eventually break loose of coverage. There was also a maddening history of these complicated schemes to leave gaping holes in coverage.

I feel it’s important to note that I was a fan of Martindale, and his defense. I was never bothered by the low number of sacks because I knew other teams went to short passes to offset that pressure, and it worked a great deal of the time. Plus, Wink was fun. He was a shout-out to the swashbuckling days of Rex Ryan and the wave of confident-to-downright-cocky players that graced that side of the field for years.

But I also see that need for change, and it is showing up in the playoffs.

The Bengals eventually slowed down the mighty Chiefs offense by using a Dean Pees-like three-man rush and flooding passing zones with fast defensive backs, while keeping a deep “roof” with the safeties to contain things in that congested underneath area. The Rams have depended on their talented front, and though they do have a superstar corner in Jalen Ramseythey also are able to keep enough guys back on defense to make quarterbacks have to hold the ball an extra second, leaving them exposed to Aaron Donald, Von Miller and Leonard Floyd. The 49ers advanced largely on their defensive line, with a relatively-weak backfield. The Chiefs, well, they have Chris Jones.

Will the Ravens favor more of this approach under new coordinator Mike MacDonald? It’s hard to say. He certainly learned a lot under Martindale during his previous tenure here, but I’ve heard it said that he played quite a bit different in Michigan. Of course, he had Aidan Hutchinson and David Ojabo, neither of which he recruited to play his style of defense, so take that into consideration. Having two of the best pass-rushers in the country can influence your style of play. It will be interesting to see if the Ravens invest a lot this offseason in a defensive line that can generate penetration over one that locks up bodies.

The quarterback does matter

Yes, Joe Burrow and Matthew Stafford are two good quarterbacks who played well enough to take their teams to the Super Bowl. But if it was only about the quarterback, we would see the best ones in each conference in the big game.

Nobody would argue that for either quarterback in this year’s Super Bowl.

But you do need very-good play. You do need your quarterback to avoid killer mistakes, and it certainly helps if your guy can make a play or two out of nothing to make a real difference. The Ravens have that quarterback in Lamar Jacksonbut I believe we need to see a different version of Jackson, and this offense, if we want to see them playing in February of 2023.

When Harbaugh spoke of impending changes with the offense, he did not say anything about replacing the offensive coordinator – regardless of how many of the Ravens faithful desperately want that change. Let’s assume he is back, and there will not be a complete overhaul of what the team does on offense. What changes can make a difference?

Besides the use of screens and dump-offs as mentioned before, I’d like to see Jackson be given less-designed runs, and more “designed scrambles,” if that makes sense. I’m talking about having Jackson line up with a spread look sometimes, particularly on first down, to loosen up those defensive fronts and get more speed on the field.

Jackson would then basically have two reads, an intermediate and a short route, while the other receivers move downfield to open up space. If neither of those two reads are wide open, let Jackson run at that time, immediately. Make those defensive linemen tired from chasing, frustrated defensive backs who take their eyes off Jackson to cover downfield receivers and then come back in with a heavy set to batter and set up play-action. Switch constantly between spread and heavy formations, not just when it’s predictable.

Things went poorly this year for Jackson after a promising and exciting start. There was a slump, followed by an injury, surrounded by social-media noise from every crevice. Perhaps some of the shine has worn off Jackson after this troubling season where so many things went wrong for the Ravens.

But the special playmaker is still there, and the team needs to use his unique skills in unique ways. Continue to work on his downfield passing, yes. Continue to work on building a better line in front of him, and utilize those weapons in the backfield to take eyes off him from time to time.

This one explains itself. Going into 2021, I thought the Ravens’ depth was one of their strengths, and that showed throughout the first half of that season. But when your depth pieces get hurt, and then the guys behind them in certain positional groups, things go south quickly, even for the deepest of teams.

I know as much about sports medicine as I do how to build a bird house – so, not much at all. But there’s probably a lot of science behind keeping players healthy, and a whole lot of luck. The Ravens could use whatever percentage of both is necessary to field a team capable of contending for a championship next season.

A home run of a draft with contributing players with cheap salaries wouldn’t hurt, either.

With the 2022 MLB amateur draft approaching on July 17, we will continue taking looks at some potential draft prospects for...
Read more
NASCAR

Picture this. You've just heard about cryptocurrency in a passing conversation but it's been on your mind ever since. You want...
Read more
Load more