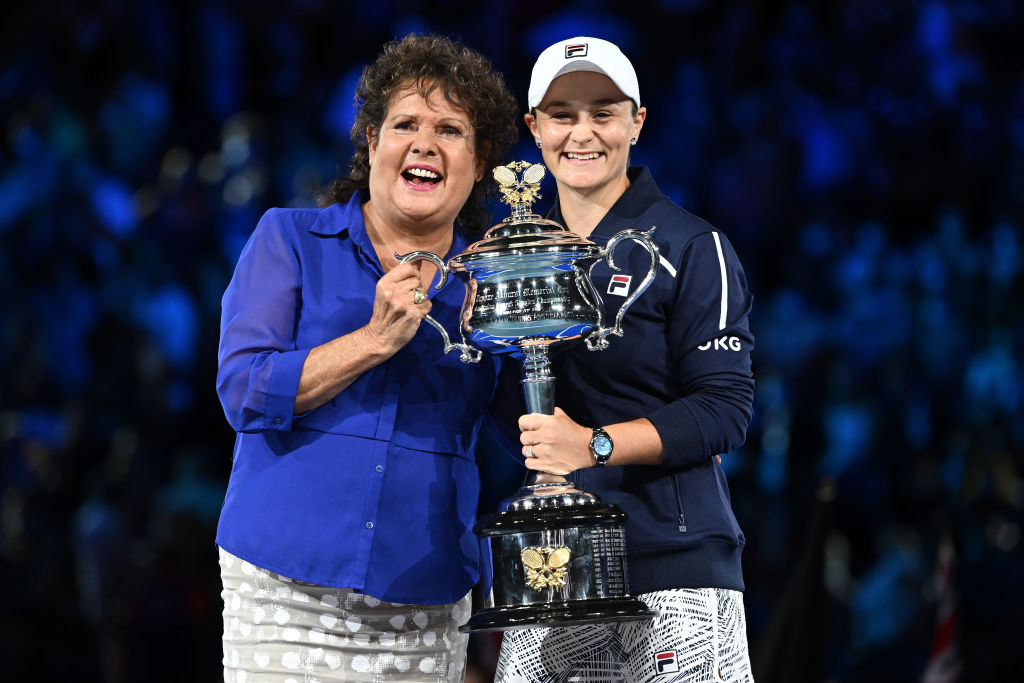 As world No.1 Ash Barty added to an already glittering record as an Australian Open champion, she joined a long line of Australian greats in the sport.

It was a ‘one-champion-to-another’ moment that will long resonate in Australian sport.

No sooner was Ash Barty celebrating a glorious career high as the Australian Open 2022 women’s singles champion, than another followed in the trophy presentation.

Evonne Goolagong Cawley, Barty’s long-time friend and mentor, had made a surprise trip to Melbourne to present the silverware.

“To be able to experience that together on such a big occasion, on such a beautiful court, and in a tournament that means so much to both of us,” said a smiling Barty as the Daphne Akhurst Memorial Cup gleamed beside her.

Goolagong Cawley was not the only past champion on hand to witness Barty become the first Australian player to claim an Australian Open singles title in the past 44 years.

Earlier, a delighted Chris O’Neil had delivered the trophy she’d also lifted as the 1978 champion to Rod Laver Arena. The 65-year-old was only too happy for Barty to take her mantle of the most recent Australian to triumph at their home Grand Slam.

“Ash is an incredible tennis player and seems like a wonderful human being,” O’Neil commented ahead of Barty’s stunning victory over American Danielle Collins in the Saturday night’s final. “It’s exciting for Australian tennis.”

In perhaps a sign of the ‘meant-to-be’ nature of Barty’s drought-breaking victory, her 6-3 7-6 victory over Danielle Collins in the 2022 final was the same score O’Neil recorded to defeat Betsy Nagelsen, another American, in 1978.

Barty is the fifth Australian woman of the Open era to triumph at her home Grand Slam, joining Margaret Court, Goolagong Cawley, Kerry Melville Reid and O’Neil. She’s the 17th Australian woman to claim the Australian title in the 100-year history of the women’s event.

She achieved that milestone with breathtaking dominance, surrendering just 21 games on her way to the final. In the modern era, only Martina Navratilova (with 19 games dropped en route to the 1983 US Open final and Steffi Graf (20 games at Roland Garros 1988) have conceded less to reach a Grand Slam championship match.

As she recovered from a 1-5 second-set deficit in the thrilling final against Collins, Barty became one of 10 women in the Open era to seize victory without the loss of a set. “It was just important for me to try and stay in touch, and I knew the crowd would love it if I could stay close and get involved,” she said.

Barty joined Serena Williams as one of two active players in the Open era to claim a Grand Slam women’s singles title on all three surfaces, with the hard-court major matching Barty’s Roland Garros title (on clay) in 2019 and Wimbledon (grass) last year.

“I feel very humble to be in such a select group. … To be honest, I do not really feel like I belong with those champions of our sport, ”said Barty. “I’m still very much learning and trying to refine my craft and try and learn every single day and get better and better.”

“To have a Grand Slam title on each surface is pretty amazing. I never probably thought it would ever happen to me. (I’m) so very, very lucky and very humbled and privileged. ”

🇦🇺 @ashbarty joins Serena Williams as the only active player to claim a Grand Slam singles title on all three surfaces 👏 #GoAussies pic.twitter.com/PGW3HVTDhY

There was an equally surreal feeling as Barty considered the long line of Australian greats she joins as a multiple Grand Slam champion.

“As Australians, we’re extremely lucky to have the tennis history and the rich history that we do, particularly here at the Australian Open,” she reflected, noting the path they have laid for other players’ success.

Barty’s foundation for success was established “closer to home”, the world No.1 pointing to Goolagong Cawley, Pat Rafter, Sam Stosur and Dylan Alcott as significant influences throughout her career.

As millions of proud Australians watched their emotional on-court embrace in the moments after Barty’s victory, the role that former doubles partner Casey Dellacqua had played was equally clear.

“She’s been a massive part of my life on the tennis court and as a personal friend,” beamed the world No.1, who equally cherished the fact that after watching her other Grand Slam victories from afar, parents Josie and Robert, as well as older sisters Sara and Ali, could witness this one first-hand.

“Being able to have that balance and understand that I’m very lucky and fortunate to be able to do what I do, I get to play a sport that I love for a living, I get to compete, work hard, and I think I just see that as an opportunity, ”Barty added.

“There are so many different things that I get to experience as a tennis player, and I’m very fortunate to do that.”

Backstage with some amazing Aussie tennis legends, Evonne Goolagong Cawley, Chris O’Neil, Judy Dalton and the one and only @ashbarty – who did something special tonight! pic.twitter.com/w3XinXWdHG

Manchester United have not held any talks with Paulo Dybala's representatives over a free transfer, Manchester Evening News reports. The Argentine is currently a...
Read more
Load more