At 85, Frank Howard is still our hero… 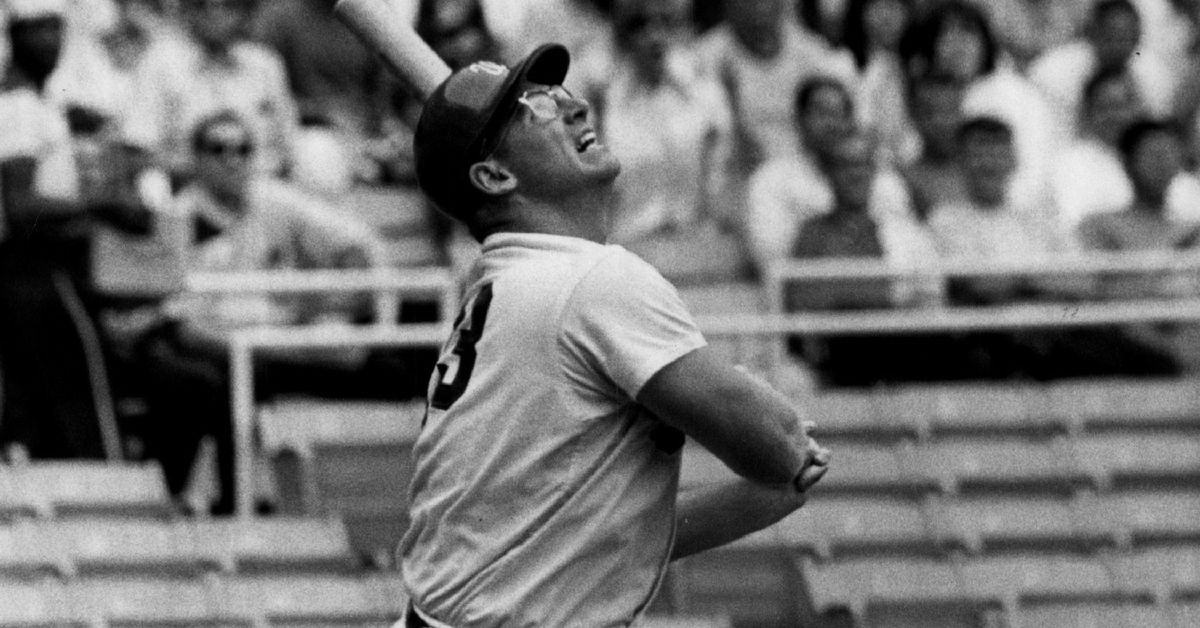 Sometimes, a voice from the past can take you there in an instant.

And on a cold, snowy Saturday in January, when the voice is that of your first baseball hero, it not only takes you back all those years, it puts a year in your eye, a smile on your face, and a glow in your heart.

Frank Howard, the Washington Senators’ slugger whose towering home runs into the upper deck of RFK Stadium captured the imaginations of Washington baseball fans from 1965-1971, captivated more than 170 of us who heard him speak on the phone Saturday to a Society for American Baseball Research meeting.

When I was six, I was certain that the face of God looked like the 6-foot-7 Howard’s. Years later, listening to the 85-year-old baseball lifer rattle off lineups and stats from games played before I was born, I’m sure Big Frank also has the voice of God.

“Like my old teammate Tommy McCraw used to say, ‘Frank, we’re in the eighth and ninth inning,'” Howard recalled.

The “Capital Punisher” has a mind that’s still as sharp as a Stephen Strasburg curve, and all the energy he needs to spin baseball yarns for more than an hour, enchanting a group of grown ups so that they are suddenly overgrown kids ..

While Howard fondly remembers Washington and the joy he gave to fans of the usually woeful Senators, his proudest accomplishment came before he was traded to DC, winning the 1963 World Series with the Los Angeles Dodgers.

“You’ll get more recognition and respect for playing on a world championship ballclub than you’ll ever get for any individual things you do,” Howard said.

That’s why one of the 382 career home runs he can instantly recall is the one off Whitey Ford in Game 4 of the ’63 Series, one of only two hits Ford allowed. The homer gave Howard’s team a 1-0 lead, and the Dodgers would go on to win 2-1 to complete a four-game sweep.

Legendary left-hander Sandy Koufax was on the mound for the Dodgers that day, and Howard remembers his teammate as one of the most dominant pitchers ever.

Howard’s World Series homer and the shot he hit off Steve Carlton in the 1969 All-Star Game, in front of the home fans at RFK, are the first that come to his mind. And while there were plenty of mammoth shots into the stadium’s upper deck, none of the specially painted seats that mark them has any particular value.

Despite his big part in the Dodgers’ success, with 123 home runs and 382 RBIs in his seven seasons in Los Angeles, the Dodgers traded him to Washington before the 1965 season in a five-player package for future All-Star pitcher Claude Osteen, infielder John Kennedy, and cash.

“I could not make the first team,” said Howard, who was competing for Dodger at-bats with the likes of Wally Moon, Duke Snider, Willie Davis, and Ron Fairly.

“That’s the kind of talent we had. But coming to Washington, it gave me an opportunity to play every day, add 150 at-bats to my annual total, and as a result, I had my best years there. ”

With the Senators, Howard honed his hitting craft under the management of former Dodger teammate Gil Hodges, and perhaps the game’s greatest all-around hitter, Ted Williams.

“Ted Williams was the most electric, charismatic person I’ve ever met in my life. Not only a baseball icon, but an American icon, ”said Howard, describing Williams ’19-year career around service in two wars before coming out of retirement to be the Senators’ skipper in 1969.

“I’ve seen you hit. You like that first little swiftie (fastball) you see, ”Williams told him.

“I’d better like that number-one fastball,” Howard responded, “because that number two, three, and four they put down there — curveball, slider, change — they’re unidentifiable flying objects.”

A laughing Williams convinced Howard that if he could take just one strike during an at-bat, he would see more pitches to hit.

“He took an undisciplined hitter – strike zone from the bill of your cap to your shoelaces, in or off the plate two or three inches. Take a 6-foot-7 guy and condense the strike zone. ”

Howard found himself laying off a lot of breaking balls in the dirt and high pitches that might have been pop-ups.

[ed note: “* = If any of you would like to call out Big Frank for possibly mis-rembering his own stats of going from 102 walks to 132 in that span in the above direct quote, go ahead. We’re going to let him take another strike here.”]

Howard remembers the man who preceded Williams in the Senators’ dugout, Gil Hodges, as one of the greatest managers ever.

“Gill really helped me. He woke me up, too. Instead of just wandering through the game, he taught me to start thinking a little bit and become a professional hitter. He could wake you up with those steel blue eyes. ”

“There are a lot of great managers,” Howard said, “but the two guys who I thought had total depth perception and peripheral vision of the whole baseball diamond, were Dick Williams and Gil Hodges.”

Howard is relieved that his former mentor is finally being enshrined in the Hall of Fame this summer.

“God bless him,” Howard said. “A lot of people thought he should have been in there 20 years ago.

Howard’s most prolific stretch of home-run hitting came from May 12-18, 1968, when he belted 10 homers in a span of 20 plate appearances, which is still the major league record for most homers in one week.

Howard says the feeling was rare, but for that brief time, he certainly was locked in.

Experience plays a key role, too. “Most hitters do not become a professional hitter until they hit their prime years of between 28 and 33, 34,” he explained.

Before his pro baseball career, Howard was a two-sport star at Ohio State, earning All-America honors in baseball and basketball. Howard was drafted in 1957 by the NBA’s Philadelphia Warriors but he opted for a baseball career with the Dodgers instead. His Buckeye basketball teammates, including John Havlicek and Jerry Lucas, went on to win the 1960 NCAA championship.

“Had I tried to play two sports, I’d never made it into an ether one,” Howard recalled. “I’d have made it, but I would not have been a player.”

Howard shares his nickname of “Hondo” with Havlicek, but Howard insists Havlicek got the moniker in college, and he was given his in Los Angeles by teammate Chuck Essegian.

Howard’s career also briefly intersected with that of a power-hitting hero from the pre-expansion Senators, Roy Sievers.

The two were Senators teammates for 12 games in 1965, the final days of Sievers’ playing career.

Howard says Sievers’ swing was unique for a right-hander.

“Most left-handed hitters have a picturesque-type swing,” said Howard, “the Ted Williams ‘the Barry Bonds.’

“One of them was Roy Sievers,” said Howard. “Another was Mark McGwire, and the third was Dick Stuart of the Pittsburgh Pirates. ”

In the late 1960s, when TV instant replay was a relatively new technology, someone would have to break out a tape measure to determine how far Howard had hit one of his legendary shots. In the 21st Century, major league ballparks have radar throughout the field that instantly calculates home run distance, velocity, launch angle, and dozens of other metrics.

Does Howard ever ponder what kind of eye-popping data his homers would have generated?

“We never thought about it,” Howard said.

“The world we live in today is so much more advanced.”

Howard believes today’s players have all the tools, technology, and data available to them to take the game to new levels.

“I watch in awe,” Howard said, describing the Capitals’ Alex Ovechkin and the Pittsburgh Penguins‘Sidney Crosby.

Howard also does not begrudge today’s players the huge salaries they’ve earned through free agency, which came about two years after his final major league game in 1973. Baseball Reference estimates Howard earned $ 770,000 in his 14-year major league career, with a top salary of $ 125,000 in 1970, following his best season in 1969.

“Today’s young athlete is, for the most part, a very intelligent young guy. He’s got a chance to do in 5 or 10 years what it takes most working men 50 years of their life to achieve. The salary structure is there, and they’re going to take advantage of it. God bless’ em. ”

The last home run Frank Howard would hit in a Senators’ uniform came on Sept. 30, 1971, in the team’s final game at RFK, a game the Senators forfeited when fans stormed the field in the ninth inning.

Howard did not have much to say about that game or homer, but he does remember believing that the nation’s capital would not suffer long.

“Bob Addie, a great sports writer for The Washington Post asked me, ‘Frank, do you ever think we’ll get major league baseball back here?’

And then, the baseball legend laughed out loud at his own naivete.

Baseball fans in Washington waited 33 years after that for the Montreal Expos to move and become the Nationals. But for that long winter without a team, we had memories of Frank Howard and his monster upper-deck shots to keep us warm.

Even now, with a team to love and a World Series championship of our own to savor, Big Frank is still our hero. Just hearing his voice can inspire sweet, summer dreams in the midst of one of the coldest winters the game has ever known.

Liv Morgan's growth as a WWE Superstar since 2015 has been well documented. Her tenacious attitude and undeniable charm have helped...
Read more
Sports