Australian Davis Cup team named ahead of March tie against Hungary | 5 February, 2022 | All News | News and Features | News and Events 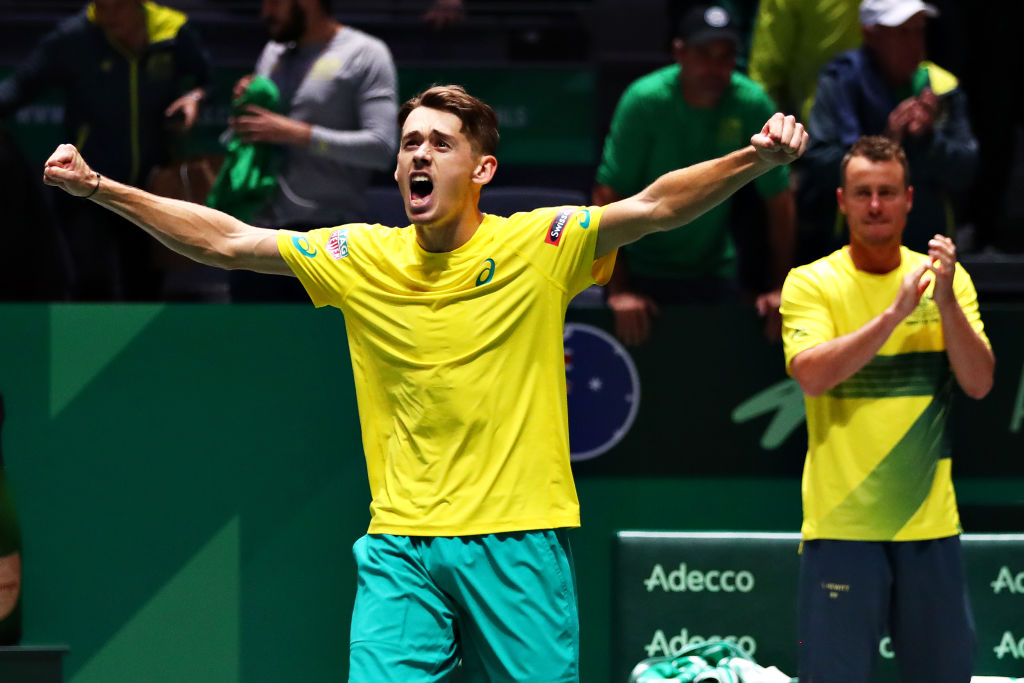 Less than eight weeks after hosting the third edition of the ATP Cup and the one-off Sydney Tennis Classic, the Harbor City will host international tennis again from 4-5 March on hardcourt at Ken Rosewall Arena, Sydney Olympic Park Tennis Center.

Australian Davis Cup captain Lleyton Hewitt is anticipating a bumper tie against the Hungarians in only their third meeting in Davis Cup history.

“So much is on the line for this qualifying tie against Hungary, it gives us the opportunity to go through to the Davis Cup Finals at the end of the year.

“It’s going to be really important to try and keep some of that momentum from the Australian summer, we had some really good results. We’re looking forward to playing in front of a home crowd.

“Alex has had most of his recent success in Sydney, winning the Sydney international a few years back but also some of his best results last month, including quality wins against Berrettini and Humbert.

“Thanasi had a fantastic Australian summer. He really cemented himself as a top 100 player again, winning his first title at home in Adelaide and beating quality players. And then to go on to win the Australian Open doubles, this is going to give him a lot of confidence heading into this tie.

“Popyrin got an opportunity to play a big Davis Cup match in the finals last year. He has a lot of firepower out there, a lot of weapons as well and certainly an option for singles or doubles.

John Peers has been a regular in the Davis Cup team for a number of years now, he’s a top 15 doubles player. He won the Sydney Tennis Classic a couple of weeks ago and played exceptionally well with Luke Saville at the ATP Cup last month.

“And Luke gets his first opportunity to represent Australia at the Davis Cup. It’s something he has worked extremely hard for, and I could not be prouder of him to get this opportunity and be able to present him with a gold jacket and his number, ”Hewitt added.

“It’s always an honor to put the green and gold on,” 22-year-old De Minaur said.

“I can not wait to get back to Ken Rosewall Arena where I played some of my best tennis over the summer and to play in front of a home crowd.”

For Kokkinakis, 25, the upcoming tie will be his first since 2015 and his fifth Davis Cup nomination overall.

“I’m obviously stoked to get the call up from Lleyton. It’s been a long time since I’ve played Davis Cup, ”Kokkinakis said.

“It’s a pretty cool feeling putting on those colors and playing for Australia. That atmosphere is unmatched, it’s a great reward for the summer I’ve had, for me and my team, and all the hard work I’ve put in. ”

“Playing Davis Cup for Australia, to don the green and gold, has always been a childhood dream of mine,” Saville said.

“To get this opportunity to represent my country on home soil is absolutely incredible.”

“I am delighted that Sydney will host this great Australian tennis team Lleyton Hewitt has assembled for the Davis Cup, who will no doubt be buoyed by the support of this tennis-loving city,” Ayres said.

“Sydney has a proud tennis history and on the back of the successful ATP Cup and Sydney Tennis Classic tournaments earlier this year, a win against Hungary in the Davis Cup would be another great coup for NSW.”

Hungary has named world No.39 Marton Fucsovics, Zsombor Piros, Fabian Marozsan, Mate Valkusz and Peter Fajta in their team. They will be led by Captain Zoltan Nagy.

The two nations last met in the round robin stage of the Davis Cup Finals on hardcourt in Turin, Italy last November with the Australians finishing on top 2-1.

The only other time the two nations have met was a World Group First Round tie on clay in 1995 in Budapest, Hungary with the hosts winning 3-2.

Tickets to the Davis Cup qualifier will go on sale from 12pm Tuesday 8 February via Ticketmaster.com.au/DavisCup. Prices are $ 29 for adults, $ 25 for concessions and kids go FREE.

Twenty-four nations will compete across 12 venues around the world during the first weekend in March.

The 12 nations to win their qualifying ties will advance to the Davis Cup by Rakuten Finals in November and will join 2021 champions Russian Tennis Federation, 2021 runners-up Croatia and wildcards Great Britain and Serbia. The 12 losing nations will compete in a World Group I tie in September.