Home Sports NHL Back in the rankings; Defender of the Week honors for Fensore;...
SportsNHL

Back in the rankings; Defender of the Week honors for Fensore; CHN Team of the Week UPDATED

Skating back into the top 2️⃣0️⃣

Following conference wins against # 9 UMass and # 17 Providence, BU has returned to the USCHO Weekly Poll Top 20, slotting at # 19 and grabbed final spot in John Buccigross’s Top 16. Terriers have also moved up to # 22 in the PairWise Rankings.

BU also earned College Hockey News’ designation of Team of the Week. In reporter Joe Porhoryles’ article, he quotes Coach Albie O’Connell saying, “It’s a mindset of just playing the right way, and we know as a group we need to play and just [stick] to the plan, ”O’Connell said. “When we go off plan, things get a little hairy.”

“It’s nice being recognized as the Team of the Week, but the goal is to be the Team of Next Week,” O’Connell said. “And hopefully the week after that.” 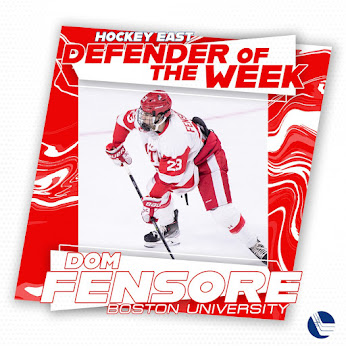 For the third time this season, junior Domenick Fensore has been named Hockey East’s Defender of the Week. Fensore, who has been nominated for the Hobey Baker Memorial Award, scored a power-play goal against UMass and finished the week +4 with six shots on goal and two blocks. With 19 points, he’s tied with Wilmer Skoog for the Terrier points lead and is tied for second among Hockey East blueliners.

Fensore previously won the award following the Jan. 14 overtime win against UConn and early in the season following the series with Sacred Heart. Classmate Case McCarthy and freshman Ty Gallagher have won top defender honors once each.

Junior Wilmer Skoogwho scored twice against Providence – including a shot off a face off (see below) – and freshman Tristan Amonte were named to the Weekly Top Performers list.

When we get an o-zone draw in the left circle, you better be ready to defend against The BU. pic.twitter.com/YJTFxxL4UC

The #mnwild has agreed to terms with forward Jordan Greenway on a three-year, $ 9 million contract extension that goes through the 2024-25 season.

Alex Chiassonplaying in his 600th NHL game, scored his fifth goal in the Canucks’ 3-1 win against Chicago.

“Pretty special,” Chiasson said. “I think today I had a moment just to realize a lot that I’ve been through. I’ve had a lot of people supporting me throughout the process. This is not just about me. I’m thankful for them. This is the greatest game to play. I’ve had the opportunity to win (the Stanley Cup) in Washington. I think that kind of keeps you open-minded on things.

“I’ve had the opportunity to play with some of the best players in the game. This game has given me so much. I just feel really grateful for these opportunities and now being part of this group.”

After being canceled last season, the Women’s Beanpot is back and BU will face off against # 6/8 Harvard Tuesday at 4:00 pm in the 43rdrd
edition set for Matthews Arena. The game will air live on NESN + and be streamed outside of New England on College Sports Live. The Terriers and Crimson last met on Nov. 19, 2019, a 6-2 BU home win.

Even though it’s her fourth #Olympics, @ pou29 isn’t taking anything for granted. # Beijing2022 @HockeyCanada pic.twitter.com/IPmD4vOplr

Terrier standout and Canadian Olympic hero Marie-Philip Poulin is wearing the C again for Canada. A TSN panel has rated her as the number one player in women’s hockey, “separating herself from the pack with all-around excellence and the golden goal in the 2021 IIHF Women’s World Championship – the first of three overtime goals vs. the US since Aug. 31. “

Proud of our 4️⃣ Terriers who took part in the @PHF All-Star Showcase this weekend! pic.twitter.com/Kqb6rctqra

There is another first-time winner in the NASCAR Cup Series in 2022. Tyler Reddick took the win away from Chase Elliott at Road...
Read more
NFL