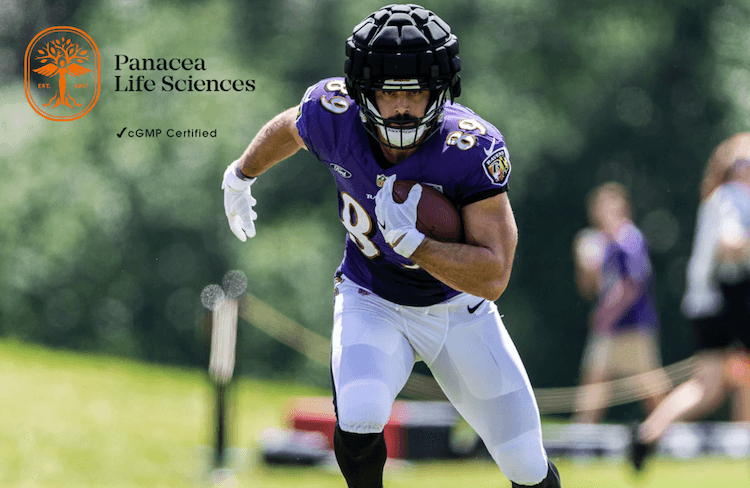 Stop me if you’ve heard this before: it was a hot day at training camp on Friday, Aug. 5. But nobody brought the heat quite like Mark Andrews.

The All-Pro tight end is coming off the best season of his illustrious career, and he looks even better this offseason. Some of that no doubt is attributed to Lamar Jackson being here at the early part of camp this year after being delayed by COVID last summer, but Andrews also looks faster coming in and out of his breaks, and seems to win by either getting wide open or on contested balls.

Right now, Andrews looks like the ultimate security blanket for Jackson. Following some uneven reps in red-zone drills, Jackson turned to Andrews and hit pay dirt. And each time Jackson found himself avoiding pressure in the backfield, his eyes turned to Andrews, who just doesn’t ever seem to let him down.

Assuming health, which is always a risky proposition, expect Andrews to post another monster campaign.

Also on the field:

— Kyle Hamilton and Isaiah Likely squared up several times in one-on-ones, as well as team drills, and they had a tremendous battle throughout the day. Hamilton stayed in sticky coverage and broke up a few passes, and Likely made a few tough, contested catches. Iron appears to be sharpening iron in the case of these two rookies.


— Fellow safety Chuck Clark stood out on Friday, breaking up passes and providing good coverage throughout the day. Staying on a safety lovefest, Tony Jefferson is so much fun to watch practice. Every rep is played like it’s his last, and he’s smiling every time he comes off the field.

— Another guy who seems to enjoy every moment of playing football is Calais Campbell. The big man is constantly talking, and he was seen offering direction to a few of his fellow linemen on Friday.

— On that line, Brent Urban continues to impress. He had a few disruptive plays on Friday, and as long as the Ravens can keep his snaps down, I think he’ll disrupt a few series this season, and that can win you a game. Justin Madubuike and Broderick Washington also stood out on a few plays.

— On the other side of the line, Morgan Moses had a nice day, standing out to me on two different plays, in particular. On one, he got beat at the snap on a pass rep, but he got a good angle and kept battling and Jackson was able to step away and throw a good pass. On another, Moses got into the second level on a run play and made an impression.

— James Proche also had yet another nice day. Like Andrews, Proche seems to win by either shaking himself wide open or pulling in contested balls.

—Tylan Wallace had a nice day, and really jumped out with a move he put on Kevon Seymour in one-on-ones. In that same set of drills, rookie David Vereen made a nice pass-breakup on a deep pass.

— As for the undrafted rookie receivers, Shemar Bridges made a nice catch against rookie Jalyn Armour-Davis in one-on-ones, Slade Bolden had a nice route and sliding catch in red-zone drills and Makai Polk stood out on two different receptions in tight coverage. Binjimin Victor, a second-year player trying to make the team, had a few nice plays, and was probably the most impressive of the young guys on a day when they received extra reps with Rashod Bateman out.

— Malik Harrison had a good day, filling running lanes and combining with Christian Welch on an outside run to shut it down in the backfield.

— Damarion Williams had a beautiful interception off Tyler Huntley, and weaved his way for a pick-six. I originally reported it was Jackson who threw the pass, and that makes me a very bad person. A very, very bad person.

— Daelin Hayes looked good again setting the edge, but Ben Powers got him on one play when he pulled across the line and stood up Hayes.

— Jackson mostly threw the ball well on the day, particularly so on back-shoulder throws and the quick game. If he brings these “new clubs” to the regular season, this offense could be frightening. Blitzes will get punished.

— Odafe Oweh got into the backfield so quickly on one snap I thought he must have started out back there. He also looks primed for an improved season ahead. He just looks so fast.

— Justin Houston got after Jackson on at least two plays, one that resulted in a completion, and the other in red-zone drills when Jackson took off and scored with his legs. It was another reminder of how Jackson can disrupt a defense even when they do things well.

— Rookie running back Tyler Badie was pretty quiet, but he had a spin move on a short pass near the end of practice that drew some “oohs” and “ahhs.” There might have been an “ooh-ahh” in there, as well, but I can’t put my hand on a Bible and swear to that one.

— Gene Stone had nice coverage on Likely late, and stepped in on a deep pass early that took away any chance at a completion. He seems to make a nice play or two every practice.

The Ravens are back at it tomorrow. See you there!