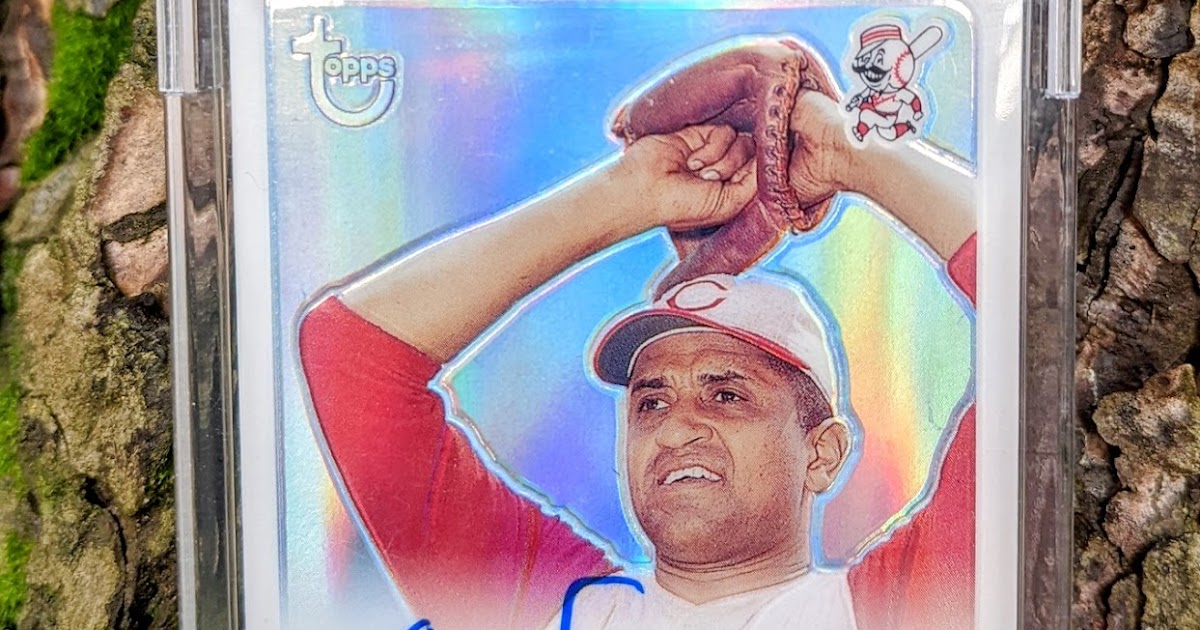 I did not really get any card-stuff for Christmas from the family, but here’s something I consider a gift from the Cardboard Gods. For me, Topps Retired refractor autos I do not have are like gold, frankincense, and myrrh all rolled into one. So when one I had never seen available before popped up at a screamin ‘deal, I flew like a flash to the buy-it-now button. Bought it a few nights before Christmas and it was my first mailday after the holiday. 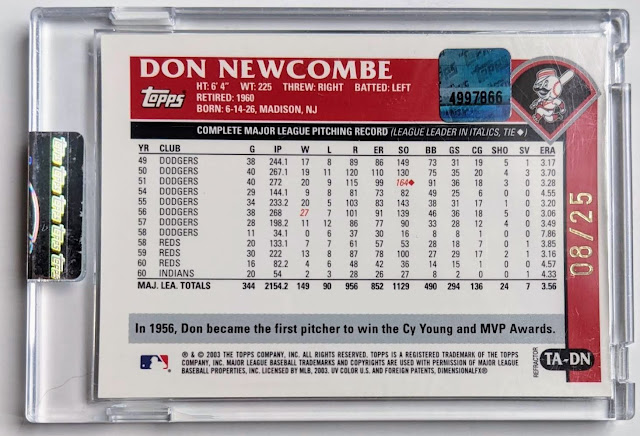 Don Newcombe has quite the story, with the baseball world overflowing with praise for him after his passing in 2019 at the ripe old age of 92. Some great years on the mound and just a heck of a person. 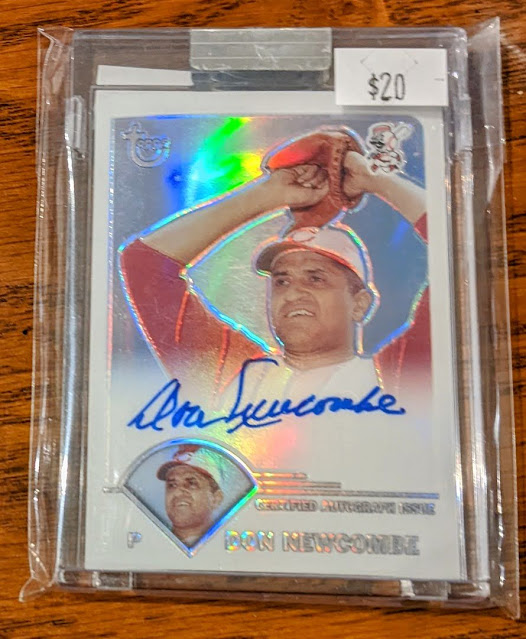 I had narrowly missed out on the base version of his only Retired auto a couple times over the years, but had been hoping to eventually score the refractor, and that’s just what happened. 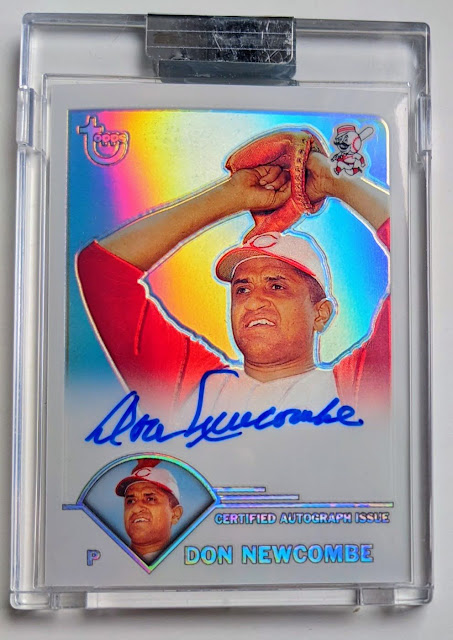 I really like this card! so you’re getting a few different shots of it to help fully appreciate its splendor. 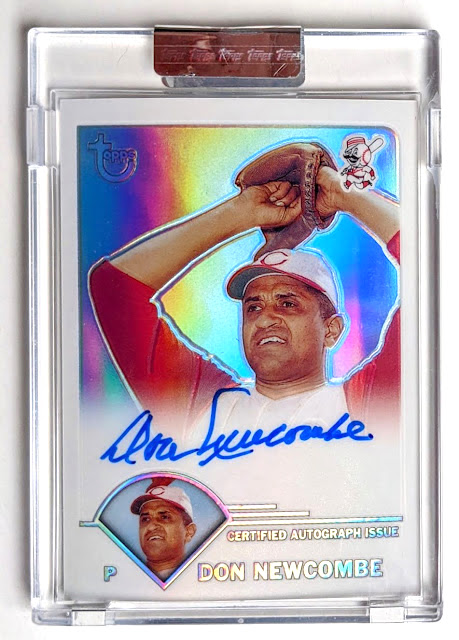 The card features Newk with the Reds rather than his “heritage team” of the Dodgers, for better or worse, and Mr. Redlegs in the corner adds some extra quirk. He’s not selling the “pretend there’s a ball in the glove” pose very hard, but it’s a cute throwback. And I think this is the first 2003 Retired card I’ve noticed where the smaller headshot photo is the exact same as the main photo. I’ve seen a few where the photos were obviously taken by the same photographer moments apart, but I guess the person who designed this card just did not have another good Cincinnati-era picture of Newcombe handy and had to double dip. 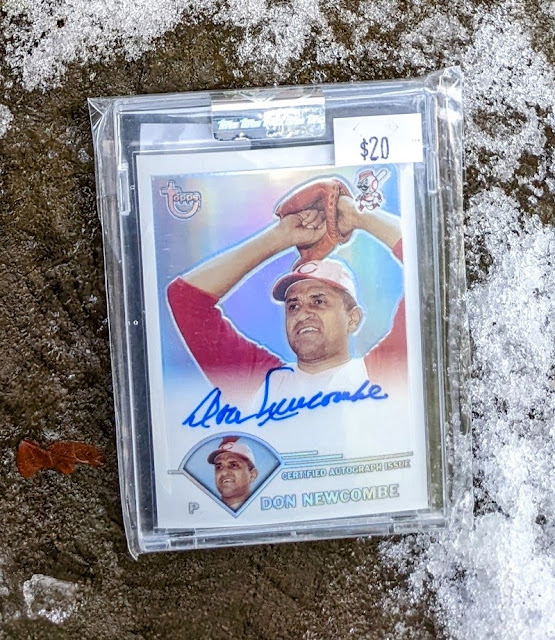 That $ 20 price tag was in fact the price I paid (plus shipping) and so while I’d normally swap out for a clean team bag, I’ll probably leave the card in this one as a reminder of the great deal. I mean, even the base version of this card (which also does not pop up for sale often) would sell briskly priced at $ 20 buy-it-now, but one of the just 25 copies of the refractor parallel? You could probably throw another zero on the end, or at the very least hover around a C-note were this a 99 ¢ opening bid auction. But bless whoever priced this at a Jackson and called it good. And I should mention the seller was not some newbie flipper, but rather one of the world’s largest card shops, operating out of Burbank, California. They tend to price a little higher than you’d like but the quantity deals help. But this time, I did not even bother grabbing another card to hit the free-shipping threshold– no way! someone else might snatch the Newk before my transaction was complete! 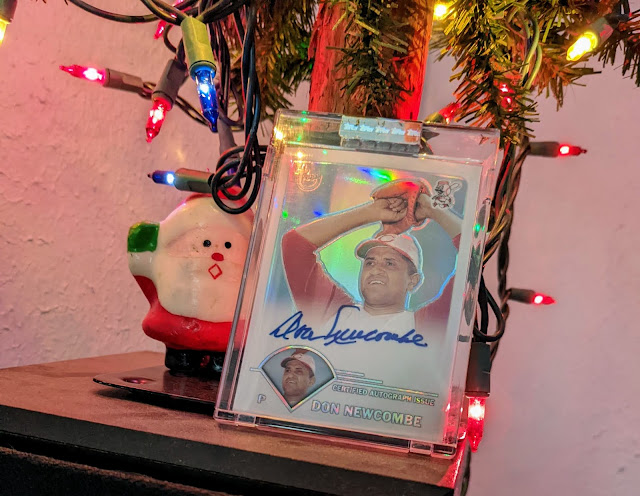 Thanks to Santa and the guys in Burbank for brightening my holiday by helping me add this awesome card to my collection.

Have a Happy New Year, everybody! I know my posting has been down in 2021 (wow, my lowest post total ever, even including my first half-year when I started this blog in June 2013) but I do not plan on quitting anytime soon. I still get a kick out of rambling about cards, even if my available time and energy for drafting posts is in short supply these days. I appreciate you readers who’ve stuck around (especially the ones who take the time to occasionally leave a comment) and wish you happy collecting in 2022!

UFC light heavyweight contender Aleksandar Rakić alleges his UFC Vegas 54 knee tear was not a new injury, and that he suffered it...
Read more
BOXING