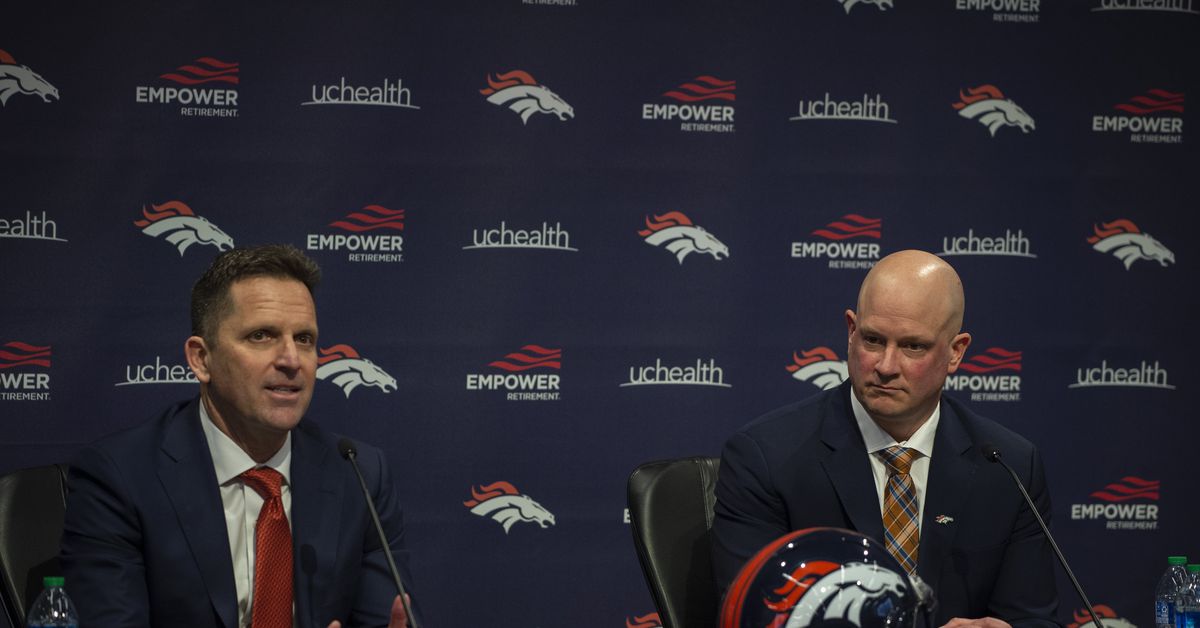 With the Senior Bowl in the rearview mirror and only the Super Bowl remains from the 2021 season, the NFL offseason is underway. The Denver Broncos are one of the nine teams with new coaching staffs and fans now know that Nathaniel Hackett will bring his version of the Green Bay Packers offense to the Mile High city. What will that mean for the 2022 roster?

Obviously there remains a ton of uncertainty around the NFL. Free agency will not occur for another month, and the league still waits to find out if Aaron Rodgers will leave the only franchise he’s ever known. There’s also the looming possibility that the San Francisco 49ers will trade Jimmy Garoppolo, which could have impacted the top of the draft order if it eliminates a QB needy team from the conversation.

With that in mind, what follows is a mock draft scenario where I made picks for teams leading up to the Broncos’ selection, setting the table for you to vote on what Paton should do. This is the fourth version of the Broncos’ Vote Mock, and it’s the first with a real draft order. Pittsburgh’s Kenny Pickett became a Bronco in the first scenario, Nevada’s Carson Strong in the second. Georgia linebacker Nakobe Dean was the pick over Notre Dame’s Kyle Hamilton and Liberty’s Malik Willis in the third iteration. Who will the pick be this time around?

Doug Pederson’s mission one in Jacksonville has to be ensuring Trevor Lawrence finds his way after a trying rookie season. The best way to do that is to empower him with a role in the gameplans and surrounding him with an offensive supporting cast that he can trust. The Jags could hit free agency with almost $ 60 million in cap space, so they’ll be able to throw money at problems such as the receiving corps. and defense, but one area that’s typically hard to shore up on the veteran market is tackle, which leaves the draft. Evan Neal is a freakish 6’7 351 lb. behemoth with experience playing on the right and left side.

I’ve watched this play probably 100 times just focusing on Evan Neal (#Bama LT # 73) and the absolute absurd movement skills. The initial explosion off the snap and move RJ in space is absurd and not normal for a guy his size. pic.twitter.com/eSrW7cILR5

The Lions have four first round picks over the next two drafts and a $ 30.5 million dead cap hit if they move on from Jared Goff before 2023, so they can afford to be patient at quarterback. Rather than reach for a quarterback in the weakest class in a decade, Detroit elects to draft an edge rusher who can serve as a face of the franchise who was born in Plymouth and graduated from Dearborn. Hutchinson’s hands combined with a very good burst and the versatility to move around the front makes him a foundational piece for Aaron Glenn to build pressure packages around.

The Texans are a team caught in limbo because they’ve yet to settle on a head coach and still have no clarity regarding the 22 allegations of sexual misconduct against Deshaun Watson. With glaring holes across the depth chart, it’d make a ton of sense for them to trade down. Unfortunately the top of this draft is considered weaker than recent seasons and the Jets aren’t a threat to take a quarterback, so they’re stuck at three. Ekwonu gives them a road grader in the ground game who is still working out the kinks in pass protection.

NC State OT Ikem Ekwonu (6040, 320, Jr.) has been impressive so far this season. Ridiculous strength levels, athleticism, and urge to finish. Showed it all vs. Clemson. Reminds me a lot of Kelechi Osemele coming out of Iowa State. pic.twitter.com/E4ur1ZosWe

With a little less than $ 50 million in cap space and a top four draft pick, it’d be in the Jets best interest to prioritize the offensive supporting cast this offseason to get a proper evaluation of Zach Wilson in 2022. Instead they elect to slide back and collect extra draft capital so the Commanders can jump the Giants and Panthers. Washington uses the trade to grab the toolsy Flames quarterback who lit up the Senior Bowl with his combination of arm strength and athleticism. The plan is for Willis to work out the rough edges of his game from the bench as he sits and learns behind Teddy Bridgewater.

Malik Willis loves a hole shot. Corner-flat concept here, read is the outside CB. Willis opens body to flat, baits CB to step up to flat and opens up the deeper route behind him. quickly resets and rips it by the CB for a nice play pic.twitter.com/bOQg2dFT9i

The Giants’ co-owner John Mara sounds committed to another year of Daniel Jones and Malik Willis is off to divisional rival Washington, which gives new general manager Joe Schoen the opportunity to grab who was once the consensus first overall pick of this class. Thibodeaux’s slide means he lands in a big market with a chance to maximize his brand, and the freaky speed rusher should juice a pass rush that was extremely dependent on Patrick Graham’s scheme the last two seasons.

Kayvon Thibodeaux is a freak of nature. I would not draft a QB over him ‍♂️

Carolina is one of the most obviously desperate teams heading into this offseason. Matt Rhule has to know his chances at lasting past the third year of his contract with the Panthers depends on getting more production out of the quarterback room. Thanks to Sam Darnold’s $ 18,858,000 fifth year option, they have less than $ 18 million in cap space to work with in free agency. The easiest path forward is to take a rookie who is “pro-ready” and hope he, Darnold, or PJ Walker look like a competent passer for most of the year. Despite questions about his hand size, arm strength, and upside, Pickett’s considered the safe passer in this year’s class.

The Pittsburgh Steelers make a few calls in an attempt to jump the Falcons and Broncos, but general manager Kevin Colbert’s hesitant to sell the farm during his last draft with the franchise. Without the trade, the Giants continue to fortify the trenches and with their second top ten pick snag a toolsy small school tackle to give Jones a legitimate pair of bookends. Penning has experience at both tackle spots during his collegiate career, and the 6’7 320 lb. man was a brute against FCS competition last season and has been training with Duke Manyweather to refine his game since.

Matt Ryan carries a $ 48.66 million cap number in 2022 and showed clear signs of decline last season, so it’s fair to wonder if the Falcons regret passing on Justin Fields and Mac Jones in the 2021 draft. With that said, there is not a quarterback in their ballpark here, which leads general manager Terry Fontenot to take yet another swing on a generational prospect at a “lesser” position. Hamilton is a 6’4 220 lb. hybrid safety who can become a Swiss Army knife in Dean Pees’ defense.

I understand the positional value argument but Kyle Hamilton is unbelievable. Derwin James like safety versatility that can transform everything you want to do on the defensive side of football.

The complete package at the safety position. pic.twitter.com/3aCZgInyKR

Who should the Broncos draft in this scenario?

Perhaps because Bianca Andreescu's triumph at the 2019 US Open was so historic in Canadian...
Read more
Sports

Britt Baker recently spoke with Blake Oestriecher of Forbes to promote tonight's AEW Dynamite, where she will face Toni Storm in the semi-finals...
Read more
Sports

Graham McCormack can not reveal what's on the menu for him come June 25 but assures fight fans they are in...
Read more
Load more