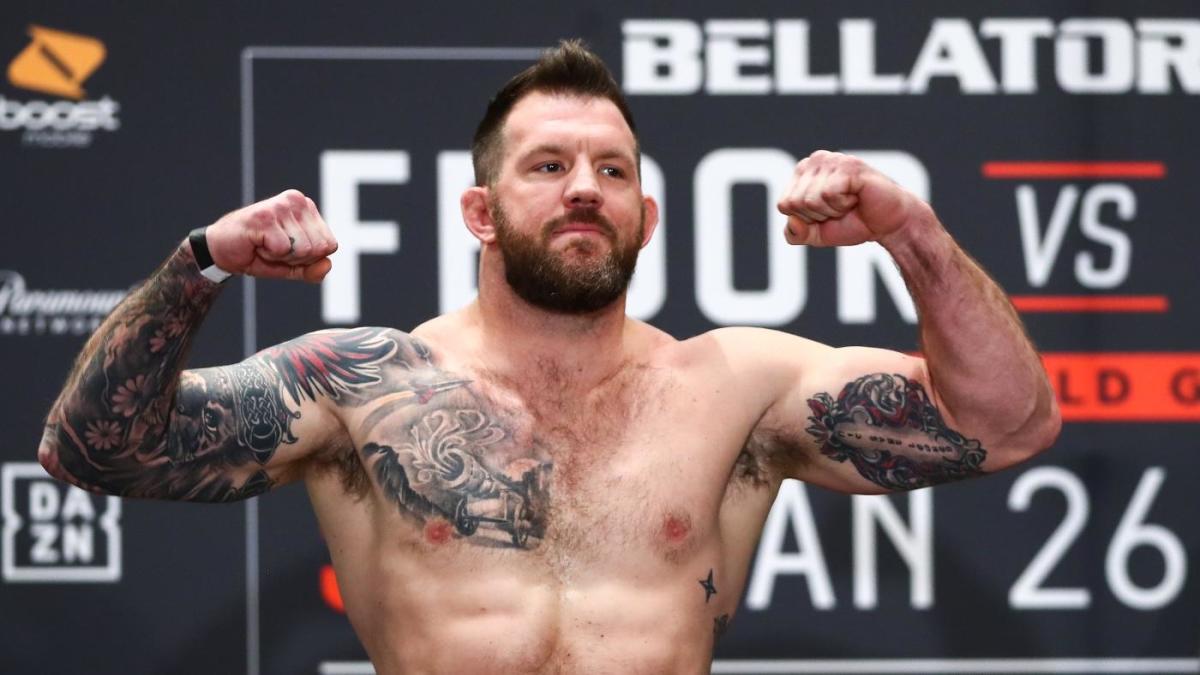 The heavyweight title is on the line Saturday night as reigning champion Ryan Bader takes on interim champion Valentin Modalvsky in the main event of Bellator 273 in Phoenix. The main Bellator 273 fight card is set for a 10 pm ET start from the Footprint Center and will be carried live on Showtime. Bader is a former longtime UFC contender who won the Bellator heavyweight title in January 2019. But he has defended the belt just once as he has spent the past two-plus years competing in the promotion’s light heavyweight tournament, where he was stopped by Corey Anderson in October’s semifinals. Modalvsky is unbeaten in six Bellator appearances and became the interim title-holder with a decision win over Timothy Johnson last June.

Modalvsky is a -335 favorite (risk $ 335 to win $ 100), while Bader is offered at +275 in the latest Bader vs. Modalvsky odds at Bellator 273 from Caesars Sportsbook. In the co-main event, lightweight contenders meet as Islam Mamedov (-410) takes on Benson Henderson (+330). Before making any Bellator 273 picks, make sure you check out the MMA predictions and betting advice from SportsLine expert Andrew Gombas.

Gombas is a former NCAA wrestler who taps into his experience on the mat to dissect the X’s and O’s of MMA matchups in a manner that sets him apart from other MMA analysts. He started the MMA handicapping service MMA Knockout Bets in 2018 and has shown a profit every year since.

With more than 1,400 selections tracked by the third-party monitoring service Bet MMA, he has shown a 6 percent return on investment for his followers. Over the past two years, his followers have netted a profit of more than $ 10,000.

Two weeks ago, Gombas kicked off the 2022 UFC season by telling SportsLine members to back underdog Calvin Kattar (+200) against Giga Chikadze (-240) in the featherweight main event. Kattar dominated from the opening bell to win a lopsided decision and give Gombas’ followers an easy winner. Anyone who has followed him already has seen massive returns.

Now, with Bellator 273 in sight, Gombas has studied the card from every angle and released his top MMA picks. You can only see Gombas’ Bellator 273 picks at SportsLine.

Bader (28-7-1) is arguably one of the most accomplished light heavyweights in MMA history. He joined the UFC as an undefeated prospect in April 2009 and would go on to post a 14-5 record in more than seven years with the promotion. All of his UFC losses came against future or former champions or title contenders.

Bader suffered back-to-back losses against Jon Jones and Tito Ortiz in 2011, but rebounded to win seven of his final eight fights with the promotion. Even so, he eventually left the UFC for Bellator after failing to secure a title fight against former champion Daniel Cormier and never fought for the belt in the UFC.

The Arizona-based fighter immediately became one of Bellator’s biggest stars and won the light heavyweight title with a split decision over Phil Davis in June 2017 to begin a six-fight unbeaten streak with the promotion. He went on to win the heavyweight title in January 2019.

However, the 38-year-old has lost two of his last three while competing at light heavyweight and is coming off a first-round stoppage loss to fellow former UFC contender Corey Anderson in October.

Moldavsky (11-1), 29, caught the attention of MMA observers with a strong run through the Rizin promotion, with his lone defeat coming by split decision. The Russian fighter has shown a daunting blend of submission skills and striking while winning all six of his Bellator fights.

In August 2020, he outlasted perennial contender Roy Nelson before defeating Timothy Johnson for the interim belt in June of last year. The matchup with Bader is widely believed to be one of the best fights the promotion could make in 2022. You can only see who to back at SportsLine.

We’ll reveal one of Gombas’ Bellator 273 predictions here: He is siding with Darrion Caldwell (+110) to get his hand raised against Enrique Barzola (-130) in a battle of bantamweight prospects on the preliminary card.

Caldwell (15-5) is an eight-year Bellator veteran who joined the promotion following an undefeated run through the Legacy FC promotion. He has fought some of the promotion’s biggest names including current featherweight champion AJ McKee, who beat Caldwell by submission in November 2020. The 34-year-old ground-game specialist fought just once in 2021 and came up on the short end of a split decision against Leandro Higo last May to tie a career-worst losing streak at two.

Barzola (16-5-2) will be making his Bellator debut following a five-year stint with the UFC in which he went 5-3-1 in nine appearances while logging a four-fight winning streak. The 32-year-old Peruvian fighter’s last appearance ended in a draw against fellow UFC veteran Rani Yahya in March 2020.

“Barzola is well-rounded but has been taken down in his fights. I give him a cardio edge, but there are question marks considering he has not fought since the start of the pandemic. I believe Caldwell will land takedowns and win a decision , “Gombas told SportsLine.

How to make Bellator 273 picks

Gombas also has strong picks for Bader vs. Modalvsky and other fights on the Bellator 273 card. He’s expecting one fighter who is a “strong grappler who looks to establish top control” to earn a dominant victory. Those Bellator 273 picks are only available at SportsLine.

Who wins Bader vs. Modalvsky? And what other picks do you need to see at Bellator 273? Visit SportsLine now to get detailed top picks on Bellator 273, all from the insider who’s up more than $ 10,000 on MMA picks the past two yearsand find out.