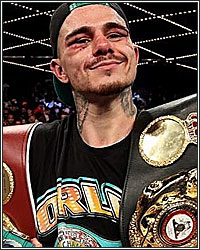 Hello boxing fans and dedicated haters. Here’s another week’s worth of my bulbous sack, bulging with gooey, salty truth, in your face. Enjoy. This week, we have comments / questions regarding George Kambosos’ future, Tyson Fury’s future, Benavidez-Andrade, and Jaime Munguia.

How much longer for the Kambosos Cinderella story?

It’s amazing how George Kambosos came up and upset expectations by beating Teo Lopez. It just goes to show you how in boxing it really does just come down to man vs. man. man and that can produce unexpected results. Unlike any other sport, boxing can make for these miracle moments. My question to you is whether Kambosos can keep this miracle going. There are a lot of talented lightweights out there and holding all four belts is making him a huge target. Everybody is gunning for the man. How long do you see him staying on top?

I hate to be a buzzkill, but I do not see the George Kambosos Cinderalla story going on too much longer. He’s clearly a strong-willed, determined fighter with a better-than-advertised skill set. You just have to admire the man. At the same time– and I do not mean to piss on his achievement at all– but it’s becoming pretty clear that he caught Teofimo Lopez at the perfect time. Lopez, like Kambosos, was inactive due to the mess in getting the fight to happen but, unlike Kambosos, not at all in the right state of mind for this fight, maybe even underestimating the Australian more then a bit. He was also suffering through COVID-related “pneumomediastinum” with “extensive air in the retropharyngeal space” according to emergency room doctors, something which is a pretty significant handicap for a fighter. According to Dr. Peter Constantino, the executive director of the New York Head and Neck Institute, Lopez is “lucky he’s not dead … really lucky.” And, still, even with all this heaped on Lopez’s shoulders, it was not like he was blown away. Kambosos won a close split decision, having to get up off the canvas in the tenth round to do so. I’m pretty confident in saying that if this fight had happened when it was supposed to happen in the spring of 2021, Lopez would’ve won the bout decisively, possibly stopping Kambosos inside of 9.

In the present tense, I do not see Kambosos beating any of the top guys at 135, although he might have the best chance of besting Devin Haney, who can be inconsistent in his focus, and Ryan Garcia, who is still very much a work in progress. Gervonta Davis would murder him right now and Vasiliy Lomachenko, who is the apparent front runner in getting Kambosos next, would absolutely school him.

I would’ve been fine seeing Kambosos take a soft touch defense first, so he can make a nice, triumphant homecoming payday and then move on to a “big” one (which could be his last “big” one). But it looks like he’s being nudged into the “big” one first. I hope he gets a hefty payday that sets him for life.

WTF is going on with Fury’s next fight?

I have to admit, it’s been a chore following this drama. I’ve checked out more than a couple times along the way– and it’s my job to follow all this shit. As things stand right now, Fury’s co-promoters Top Rank and Queensbury Promotions won the purse bid for the WBC-mandated Tyson Fury-Dillian Whyte title bout. The $ 40 million bid will be split 80-20, with the defending champ Fury getting $ 32 million and Whyte getting about $ 8 million. BUT. Whyte has yet to officially sign the contract and is reportedly threatening to refuse doing any publicity for the fight if he does not get more money. The feeling is that Whyte WILL eventually come aboard and that the fight will come along as planned. If it does not, I guess we all go back to square one, the next highest-ranked contender is contacted, and they try putting things together again. One thing is fairly clear, though– a full unification bout with Usyk is out of the question until after Usyk-Joshua 2. But, then again, who the hell knows anymore?

On a side note, how much fun would it be for the Fury-Whyte press tour to kick off without Whyte being a part of it? I can totally see Fury bringing a blow-up doll or obese actor to play the role of Whyte at press conferences and media interviews. Pretty funny stuff … and pretty shitty business from Whyte, who could significantly boost his earning power in future fights by playing angry, belligerent yin to Fury’s yang.

Hope you had a great Valentine’s weekend with your loved ones.

Sometimes we get our attention deflected over cash cows that we totally forget that there are awesome fights to make, lets call it the Canelo effect for now 🙂

So there was talk from Benavidez that he would fight Andrade, call this an elite level fight because I believe both are perceived as boogey men and they both have quite a lot of skill. Call me crazy but I believe that Andrade takes this one. I am impressed with Benavidez’s skills, but he has not shown he can cut off the ring effectively, and Andrade will just have too much movement for him to land those nasty combinations. How do you see it developing?

As for Jaime Munguía, he is fighting D’Mitrius Ballard this weekend and he is ranked # 1 by both WBO and WBC … crazy huh? I guess you can totally see his management does not trust him, he should be the one fighting Andrade by now, but I guess it is what it is …

Benavidez’s promoter Sampson Lewkowicz squashed that Andrade talk real quick and he was exceedingly honest in doing so. It’s risk vs. reward, just like with every boxer scoping out opposition (and also the reason Benavidez is not currently on Canelo Alvarez’s list of priority fights). Andrade does not bring anything to the table but risk and, even in a best case scenario, a win for Benavidez that makes Benavidez look shitty. Lewkowicz flat-out said that he’d need to get more money for fighting Andrade than he would get for fighting Canelo, precisely because the risk-reward ratio is so unfavorable for his client. Fight fans have a natural disdain for this kind of business talk, but it’s a reality. Andrade has spent much of career not doing much to beef up his drawing power and now he’s paying the price.

As for Munguia … yeah, it speaks volumes that the kid is collecting no. 1 spots and his team is not at all pushing to get next-level title fights. His people went real fast after he squashed Sadam Ali for the junior middleweight title back in 2018 and almost saw the train fall off the tracks in his subsequent fight against Liam Smith. After that, they consciously took a few steps back and got appropriately careful with their matchmaking for him. Since that time, Munguia just hasn’t improved a whole lot (although he did show some added nuance in his last bout against Gabriel Rosado). All in all, though, I do not think Munguia is ready for an elite-level opponent and it seems that his people agree with me. He’s still 25. There’s time for him to grow and develop, so why rush things? He may get surprised and take an “L” or two along the way, but Latino fight fans do not obsess over UNDEFEATED like American and European fans do. Munguia already has good buzz among Mexican fans and solid support. As long as he keeps putting on shows, he’ll be able to inch forward at his own pace and work his way towards becoming something more than he is right now– a big, strong, enthusiastic kid who just likes to fight.