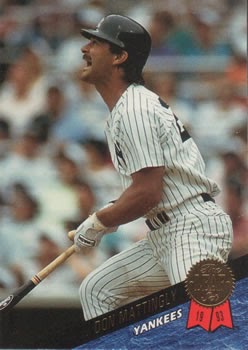 After much internal debate, I decided to end this series with two single-year posts.

I started the Best On-Card Element series with posts dedicated to an entire decade. But as the number of sets increased through the 1980s and into the 1990s, these posts got more and more difficult.

So the last two posts in this series will settle on just a single year. 1993 first and then 1994. That’ll be it. It will mesh nicely with my departure in the hobby, which was somewhere in the middle of ’94. To be honest, even though I’ve come back to the hobby, I’ve never really cared about this year’s current cards as much as I did pre-1994.

So let’s see if I can find the “best” or most notable element of each major card set from 1993. 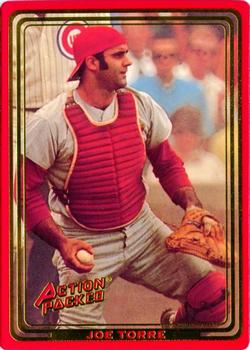 Best on-card element: Action-Packed actually entered the baseball card scene in 1992 after being a football-only product. The best on-card element is the obvious embossed images. The rounded corners are just as obvious, but that’s not a point in its favor.

Best on-card element runner-up: As much as I like black borders, I think the red ones in ’93 are a step up from the black ones in ’92. The black ones chip like a son-of-a and red borders are always fantastic. Best on-card element: The 1993 Bowman cards aren’t much different from the 1992 Bowman cards. Fortunately, the main difference for the set, no matter who you ask, are the foil-bordered cards that focused on top rookies. These were actually part of the base set even though they were treated as inserts, inserted one-per pack. 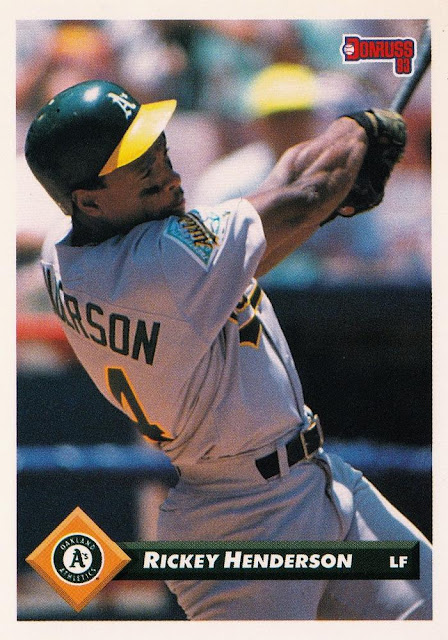 Best on-card element: It does not look like that infernal 1992 Donruss? … OK, that may be good enough for me, but I’ll try to find something else. I think, even though I find ’93 Donruss somewhat boring, this is one of the cleanest designs in Donruss’ entire history, so I’m calling that the best.

Best on-card element runner-up: The beveled edging is certainly hard to miss, and considered very much of its time. 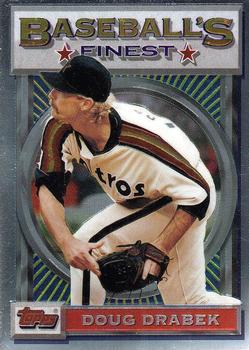 Best on-card element: More beveled edging! … Well, just joshing, folks. It’s chromium technology, guys. Multi-color metallization! It was stuff like this that caused card companies to engage in an endless cycle of trying to one-up each other, for better or worse. For the record, I consider the first two Finest sets downright cool. 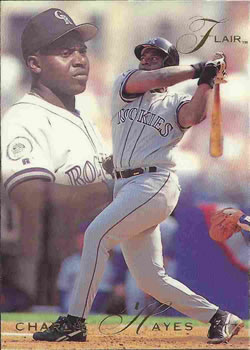 Best on-card element: Flair made its debut in ’93 as Fleer’s “super-premium” set. I am saying the best element is the thickness of the cards, which had to be amazing at the time. The thickness of the stock, to me, is better than that floating portrait shot on every card, which continues to creep me out. 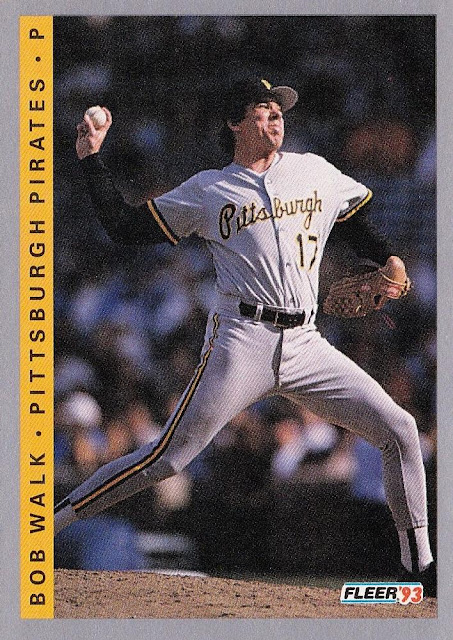 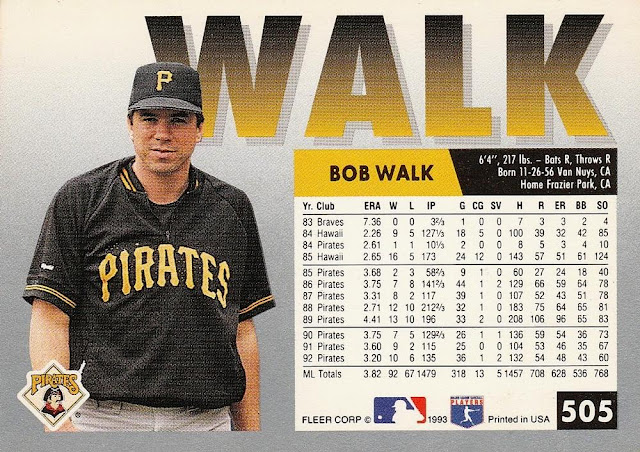 Best on-card element: Fleer went with gray borders in 1993 for the FOURTH TIME in 10 years. (Although some consider Fleer’s ’83 borders brown). The sideways writing on the front is certainly distinctive, but I’m going with something much easier to read: those LAST NAMES ON THE BACK HOW LOUD ARE THOSE THINGS !!!!!

They practically knock you over, especially if the name is short. Makes me wish Chin-Lung Hu was in the set. 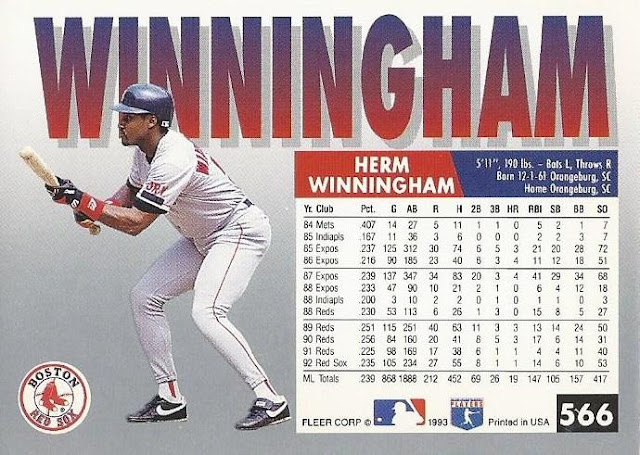 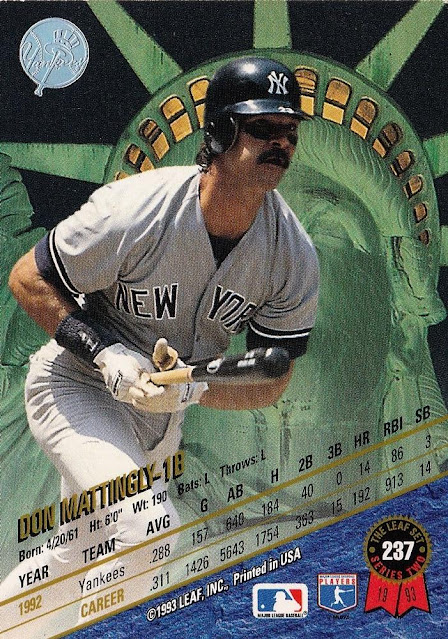 Best on-card element: Straight to the back. The card backs for ’93 Leaf are among the greatest of all-time. I ranked the best card backs way back when on this blog and this set was praised mightily. 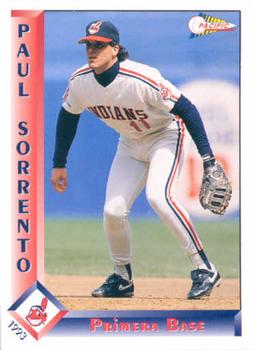 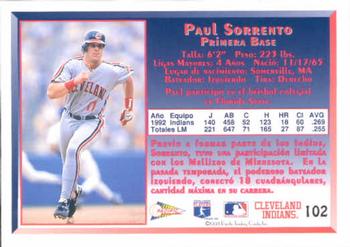 Best on-card element: This is the first time that Pacific was known for anything other than a set of legends players or Nolan Ryan. Pacific marketed itself to Spanish-speaking collectors with fronts and backs featuring Spanish! Pacific would ditch this practice in future years but still stay connected to its Spanish roots through its Latin-themed inserts and general look of its designs. 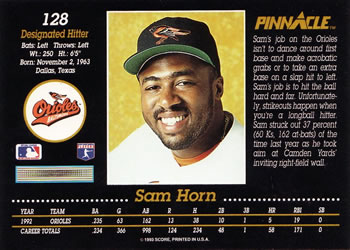 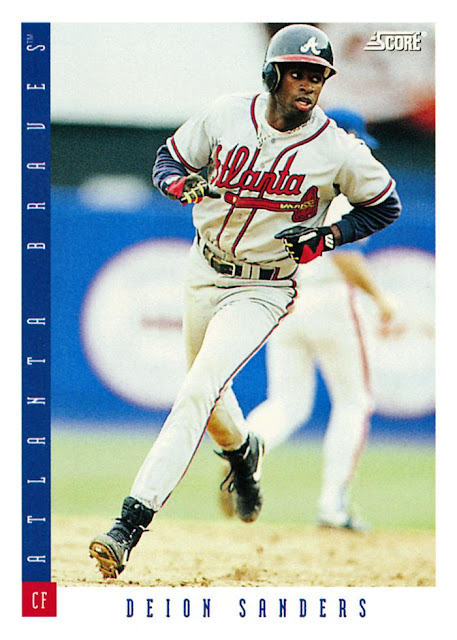 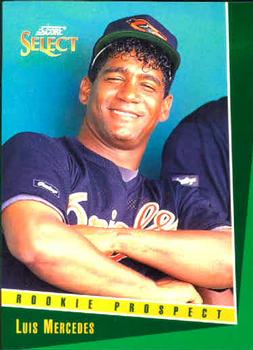 Best on-card element: I’m not sure why ’93 Select even was a thing, I guess card companies were starting to separate their collectors into tiers, as far as how much they could afford (something I wish they’d stop doing), and this set was considered a mid-tier product. I have an inexplicable appreciation for this set, which means I must enjoy the angular design elements. But as far as the “best” or most notable, it’s that the whole freakin ‘set is GREEN. 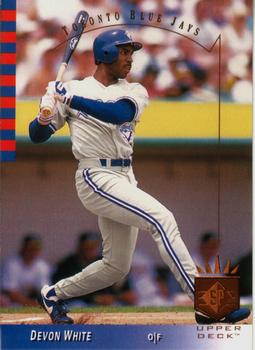 Best on-card element: There are a lot of non-design reasons why people get fired-up over this set – OK, one non-design reason. But as far as design, for what is Upper Deck’s first super-premium set, I’m going to say it’s that little bronze logo in the corner that uses lenticular printing. Fancy! 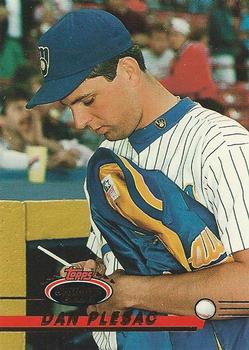 Best on-card element: Not a lot of difference in design from year-to-year with SC, so let’s go with the fact that ’93 Stadium Club uses red in the minimalist design. Red is very distinctive, which is why I’ll never confuse this set with another one, like I do with later ’90s Stadium Club sets. 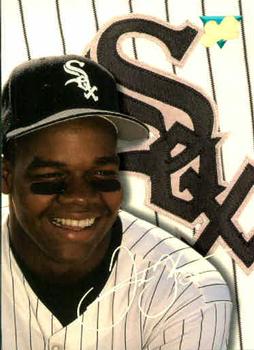 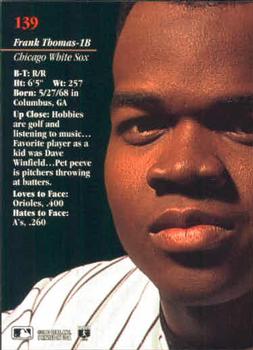 Best on-card element: 1993 Studio is one of the best-designed Studio sets, if not the best. I really like the team-logo background on the fronts. It’s the first Studio set to be portrayed in color on the front and the back. 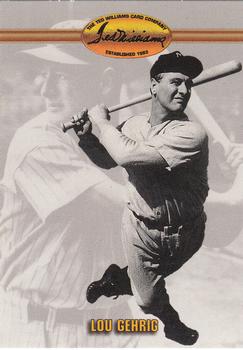 Best on-card element: Honestly, they’re not great cards to view. The subject matter is everything in this set and it’s interesting to see some different photos of some familiar players, so I guess that’s the best on-card element. 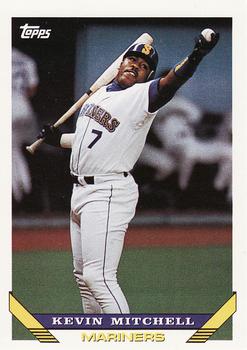 Best on-card element: I find the design element in ’93 Topps exceedingly boring. The only thing that saves the cards is that Topps was continuing to make its photos more and more interesting. It was a slow progression beginning in 1991 and continued into 1992. I think ’93s are even better, though maybe not as good as ’94. So that’s the best for me, photo variation helps with the boredom. 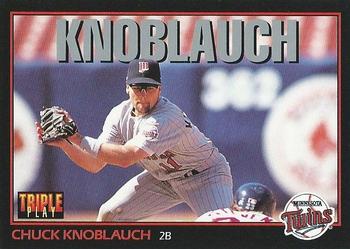 Best on-card element: Hey, look! It’s the ’93 Fleer back names on the front of Triple Play! The ’93 Triple Play design is a lot better than the one on its ’92 debut. Black borders is the most notable element. 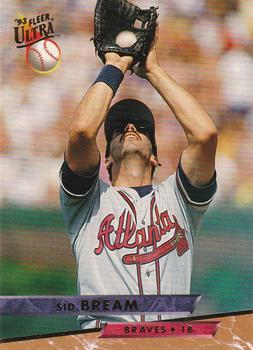 Best on-card element: Not a lot of difference between ’92 and ’93 Ultra. The marble bottoms are back except they’re more of a beige marble. I now have a Define the Design name for one of the early ’90s Ultra sets – The Kitchen Countertop Set. But the best on-card element for me is that Ultra added a little fire tail to its baseball. 🔥 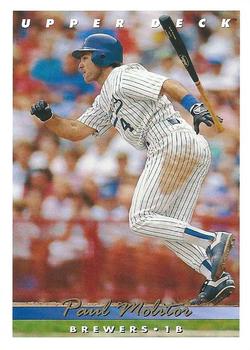 Best on-card element: I think 1993 Upper Deck is the five-tool player of card sets. It did everything well: Great photos, great design, great card backs, great set size, great subsets. One of those elements is what I’m picking as the best: 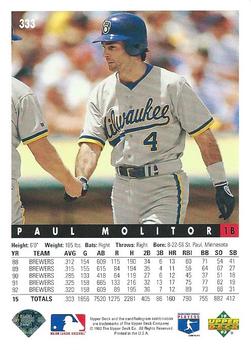 It’s the backs. For the first time in its history, Upper Deck oriented its backs vertically instead of horizontally. This made for more stats on the back than what UD had done before, answering a common complaint among baseball card traditionalists. It also created a large and attractive photo at the top. One of the best-looking card backs of all-time. 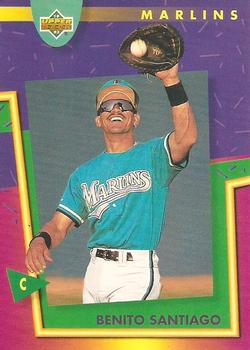 Best on-card element: You could make a list of the Most Early ’90s Sets Of All-Time. It would be difficult to top this particular card though. And that’s my “best” element for Upper Deck Fun Pack, a set that created cards that represented all the Color Me Badd Awfulness of the Early ’90s.

So, if you made it through all that, it may have seemed a little bit familiar to you.

That’s because I essentially did this for 1993 earlier.

I hate repeating myself, so I do not know if I will do this for 1994 after all, especially since I’ve done a “Best Set Of The Year” for 1994 already.

But I do not mind if I repeated things for 1993. To repeat myself again, ’93 was the last year that mattered in a lot of ways.