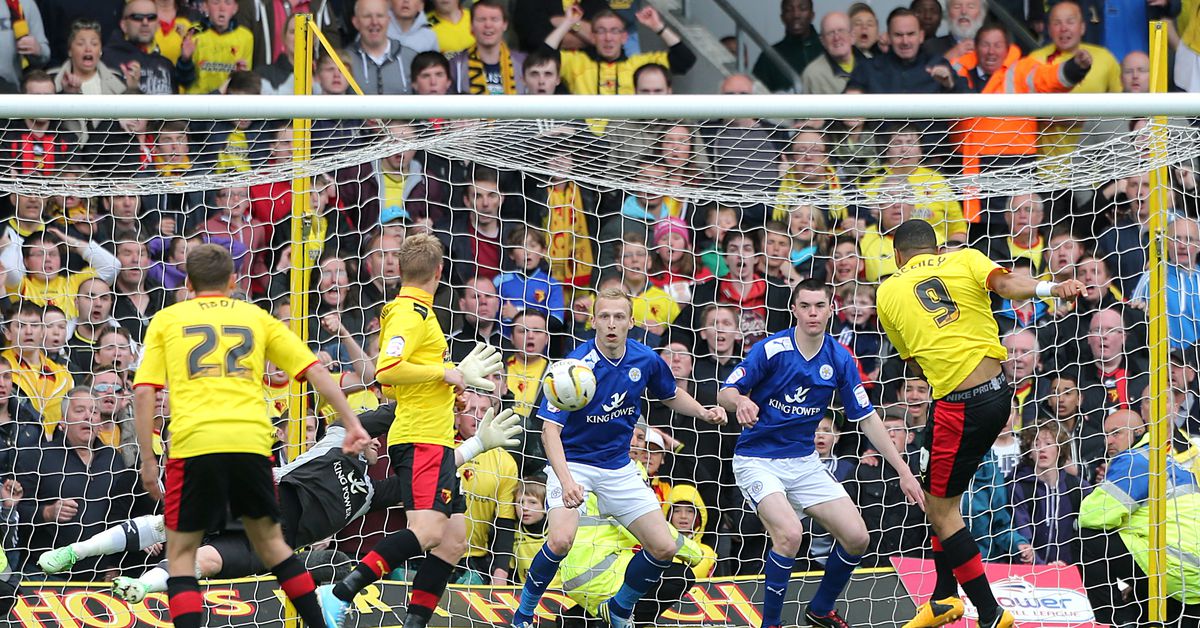 On May 12, 2013, Watford FC hosted Leicester city in the 2nd leg of the EFL Championship playoff semifinal. Down 1-0 on aggregate, Watford were looking to find a way to come back and win the second leg to advance.

The site was Vicarage Road, Watford’s home, and on the line was a trip to Wembley Stadium for the playoff final, more affectionately known as the “Richest Game of Football.” Watford were seeking to return to the Premier League for the first time since 2007. Promotion came with a windfall of approximately £ 170.3 million for a club, but not getting there meant another offseason of thinking about what could have been. For Troy Deeney, he wanted a chance to help Watford move onto Wembley with a chance to play in the Premiership, something he had never done before.

However, Deeney was after more than just a trip to the playoff final. He was looking for redemption. The 2012-2013 season started off for him not on the field, but behind bars. On February 29, 2012, Deeney was arrested for beating up a group of students at a bus stop along with 3 others. He cited depression from learning of his dad developing cancer as the reason for his behavior. His dad would die from aggressive esophageal cancer a few months later.

Deeney was sentenced to 10 months in prison for his actions, but was released after three months, rejoining Watford a couple months into their season. He then refocused his efforts towards helping his team win. He scored 20 goals across all competitions that season, leading the team in goals. But still, he needed redemption, and he hoped that he could continue that track with just one magical moment in this match.

The match started off great for Watford, with Matěj Vydra scoring in the 15th minute on a volley to make it 1-0 in the match and equalizing the aggregate at 1-1. Vicarage Road was rocking, and everyone believed. However, that lead was short-lived, with David Nugent scoring a header from an Anthony Knockaert corner for Leicester City 4 minutes later to put them back on top in the aggregate, 2-1.

The game advanced to halftime and Watford was left still needing 1 to send it to extra time and 2 to advance. Watford pushed through, and in the 65th minute, Troy Deeney set up Vydra for his 2nd goal of the match. The aggregate was now 2-2, and Watford fans could once again believe.

The game enters 2nd half stoppage time and the entire stadium is at fever pitch. Everyone’s looking for a moment, and a moment came. In the 5th minute of stoppage time, Leicester City were pushing the ball forward, and Knockaert was able to work the ball down the right flank into the penalty area, where he brought down.

It’s a back-breaking call for Watford as a goal would mean the end of their dream to get back to Wembley. Anthony Knockaert stood over the penalty spot with the ball to take the kick, as Watford goalkeeper Manuel Almunia stood on the line between the posts, ready to try and stop it.

Knockaert stepped up to take it, as 16,968 fans held their breath …

Almunia saved the shot with his foot, and the ball trickles out for a rebound. Knockaert shoots again. Almunia saves it again, and the ball is cleared out by a Watford defender as the stadium erupts into bedlam. Watford players sprint down the field with the ball as the stadium noise swells even louder. Fernando Forestieri eventually gets the ball deep in the right corner and sends a cross into the box across goal.

Jonathan Hogg, instead of trying to fire a shot, simply knocked the ball down into the middle of the box … to an open man.

It was Troy Deeney.

Deeney puts his entire soul through the ball, and it goes into the net.

Vicarage Road turns into a full earthquake. Deeney takes off his shirt as he jumps into the crowd to celebrate, followed closely by his teammates and even Watford manager Gianfranco Zola. Fans rush onto the field as Leicester fans collapse on the field in incredible dejection. Troy Deeney was a hero. With the final kick of the match, he had sent Watford onto the Championship playoff final at Wembley. He was going to play for his chance to head to the Premier League. Watford fans continued the celebrations as the final whistle eventually blew.

The scenes are some that anyone who has a pulse will never forget. It’s arguably the most dramatic finish to a soccer match in world history, and it’s certainly one of the most memorable. Even the call of the final play will forever give you goosebumps and make you emotional, whether you’re a fan of Watford, Leicester City, or a neutral:

“Here’s Hogg … DEENEY !!” That call alone will send chills up your spine. Troy Deeney was a part of world soccer history as part of one of the most extraordinary finishes to a match of all time.

Watford eventually lost to Crystal Palace in the playoff final, denying their place in the Premier League next season. However, Watford only had to wait a couple more years before they saw their dream realized of getting promoted. Finally, Troy Deeney was able to play in a Premier League game. And that glorious day in May 2013 was the beginning of his redemption song. Two years later, as captain of Watford, he celebrated his team’s promotion to the Premier League. But, he will forever be known around the world for that moment at Vicarage Road when he capped the wildest end to a game you will ever see, and not just for the troubled past that plagued him to that point.