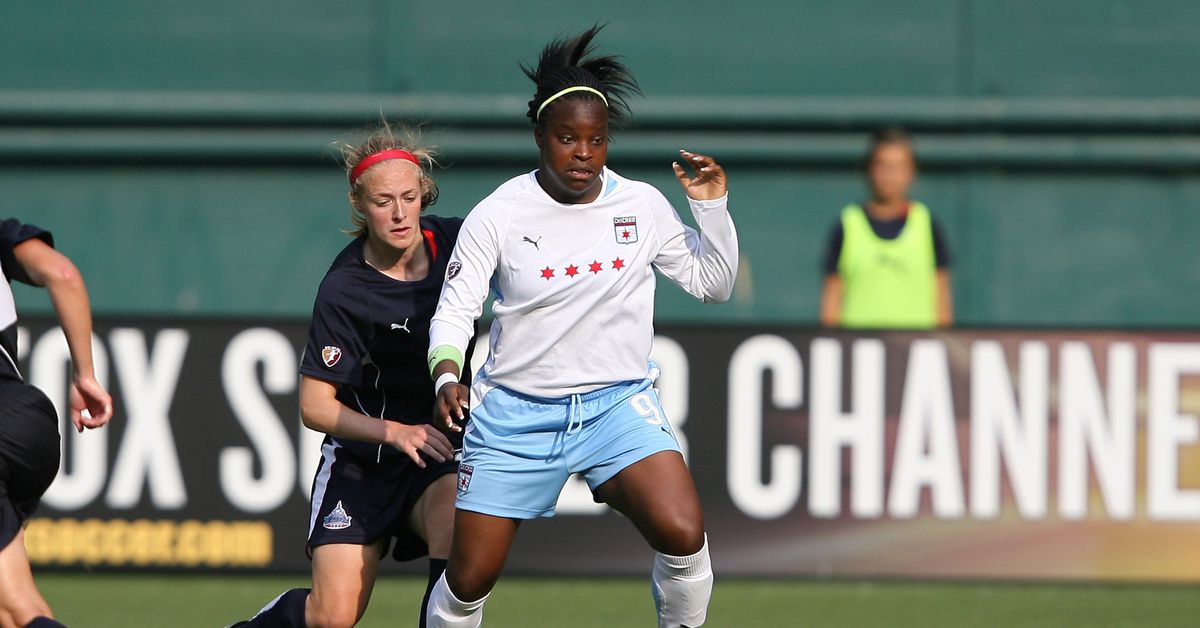 On every team, the endless quest is to create that perfect mix of players that forms the best roster. You have your superstars, you have your young talent, and you have your glue players. Danesha Adams was a player that could serve as that glue, that always rode below the radar and has not really gained the recognition some of her teammates were granted. However, many times she would emerge to make the spectacular play look routine, making her a reliable player for each of her teams. Above all, she was known for making it count when the game was on the line, coming up clutch and providing game-winning goals when one was needed.

Born in Los Angeles, she started to earn buzz when she played at Walnut High School in Walnut, California. After moving to the Cleveland area, she finished her high school career at Shaker Heights High School, where she became the school’s single-season record holder in goals and assists. On the club circuit, Adams played soccer for the FC Slammers, helping the team to 2 state titles and the Frosted Flakes Kellogg’s Cup in 2000. That victory earned her team a picture on a Kellogg’s cereal box.

Danesha Adams returned to LA for college to play for the UCLA Bruins, ranking 2nd on the team and 4th in the Pac 10 in scoring with 12 goals and 4 assists as a freshman. She also led the team with 5 game-winners, including 1 in the 3rd round of the NCAA Tournament and the semifinals as well. She was a Soccer America and Soccer Buzz Freshman All-American that season and made the 2004 NCAA All-Tournament Team. The Bruins eventually lost in the NCAA Final.

Her sophomore year saw her make even more waves, leading the Pac 10 in scoring and setting a new school record with 9 game-winning goals in a season. Adams was 1st team All Pac 10, a 2nd team NSCAA All-American and a 1st team Soccer Buzz All-American along with another NCAA All-Tournament Team honor. She scored 4 goals for UCLA in the NCAA quarterfinals and had 6 overalls in the tournament, leading UCLA back to the NCAA Final, where they once again fell short of lifting the trophy.

In 2006, Danesha Adams was an integral part of the USWNT U-20s that played in the U-20 World Cup. There, she led the team in goals with 3 and was on the U-20 World Cup all-star team. Because of that competition, she missed the first four matches of her junior year at UCLA. A month later, she missed 2 more matches, but for another terrific reason: she was finally called into camp with the USWNT. She made her first and lone appearance for the USWNT in a friendly in October 2006 against Chinese Taipei. Adams subbed on for Kristine Lilly in the 75th minute, and just 7 minutes later assisted for Megan Rapinoe on the final goal of a 10-0 victory.

Adams returned to UCLA and earned more All-American honors, finishing 2nd on the team in scoring with 12 goals and 4 assists. She had 7 more game-winning goals as well, helping the team back to the semifinals. She finished up at UCLA in 2007 with yet another NCAA semifinal appearance, signing with the Cleveland Internationals after graduation. She scored 10 goals for that team in 5 appearances. She then moved to the Pali Blues in 2008, scoring 6 goals in 11 appearances for that team.

That earned her a contract with the Chicago Red Stars in Women’s Professional Soccer. She signed with the team and played there for the 2009 season before moving to the Philadelphia Independence in 2010. There, she once again was able to find the clutch gene. Her goal in the 103rd minute of the WPS Super Semifinal gave the Independence a 2-1 win over the Boston Breakers and advanced them to the 2010 WPS Championship, where they would eventually fall to FC Gold Pride.

She remained in Philadelphia for another season before heading abroad for stops in Norway (Medkila) and in Sweden (Vittsjö) before she returned to play for Sky Blue FC (now NJ / NY Gotham FC) in the inaugural season of the NWSL. She scored 3 goals in 20 appearances for the team, and in the offseason she went to Turkey to play for Ataşehir Belediyespor, scoring 8 goals in 7 games.

She was selected by the Houston Dash in the 2014 NWSL Expansion Draft, but was sent to the Washington Spirit just a few days later. She played in Washington for the 2014 season before wrapping up her career with Medkila.

Game-winning goals. That’s what Danesha Adams was known for. Currently, she’s the co-head coach for the University of the Pacificand the next generation of players is learning directly from her how they too can come up clutch when the game’s on the line.

Resiliency has been crucial to the Celtics all season. In Game 4, Boston showed their resilience and tough mindset again,...
Read more
Sports