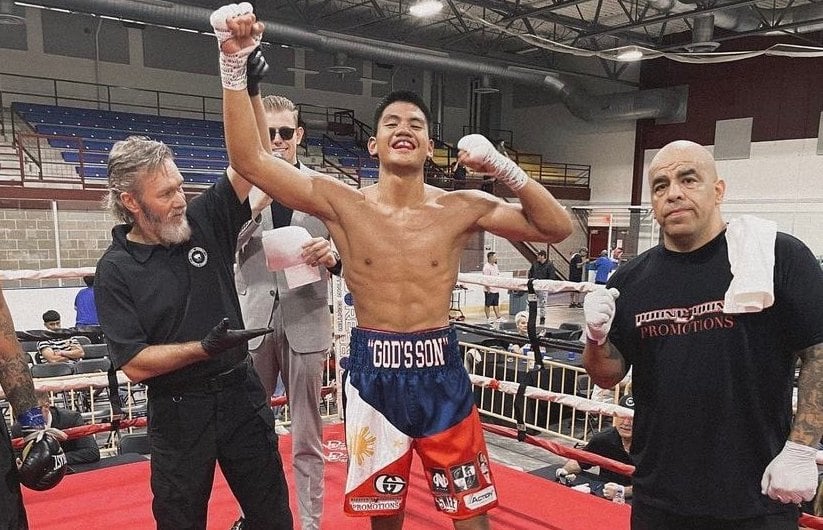 Blazen Rocili celebrates after knocking out Rueben Morales in his pro debut in August of 2021.

Shortly after graduating from Pearl City High School, Blazen Rocili and his parents left their home in Hawaii to start a new life in Las Vegas. It was a difficult but necessary step for the 19-year-old to pursue his dream of building a career as a pro boxer.

It’s that sacrifice that keeps him focused through the hard workouts and grueling sparring sessions in the desert city. His mother left her job at the Honolulu Airport, where she’d wake up at 6 am to prepare Blazen and his little brother for school, before sitting through an hour of island traffic. His father had been working three jobs to support their family, working as a cook and doing construction before finding employment in the trucking industry when they relocated to Nevada. The family, which has roots in the Ilocos Norte province of the Philippines, has invested their hopes and dreams in their young son.

Blazen Rocili’s only focus is on succeeding so that his family’s sacrifice will not be in vain.

“They’re always paying for my expenses, always bringing me to where I needed to be, helping me with my nutrition. In a way I feel like, it’s only right if I make it. I have to make it in this sport to pay them back for everything they’ve done, ”said the 6-foot-3 Rocili (4-0, 4 knockouts), an undefeated southpaw who boxes in the junior middleweight division.

For Rocili, his boxing journey began at age 8 at the Waipahu Boxing Club, a gym that was established in the 1940s and was the starting point for Filipino American champions Brian Viloria and Jesus Salud, and former lightweight contender Andy Ganigan. A chubby kid growing up, Rocili’s main goal was to cut down his weight. He caught on and began to compete at age 13, and estimates that he had about 20 amateur fights. There were few opponents to fight in Hawaii, so Rocili’s family had to scrounge together money to fly him to national tournaments, like the 2017 USA Junior Open in Salt Lake City, Utah, and the 2019 USA Youth National Championships in Lake Charles, La .

It was at the 2019 Youth Nationals where Rocili met his current trainer, Richard Barrientes. Barrientes trains another pair of Filipino-American prospects with Hawaiian roots, his twin sons Chavez and Angel Barrientes. Barrientes invited them to his base in Vegas, and introduced him to promoter Julian Vigil of Pound 4 Pound Promotions. Vigil signed Rocili, and turned him pro in August of 2021 with a third round stoppage of Rueben Morales. Rocili’s first three bouts were in Cheyenne, Wyoming, but he registered his fourth win on Sunday, knocking out Johnny Cheeseboro in three rounds in Aurora, Colorado.

So far, Rocili has shown power against limited opposition: he has knocked out all four of his opponents inside of three rounds, though just one opponent – Edison Charley – had any prior pro experience. Charley entered their bout last December with a 0-10 record, and was stopped in the second round.

Matchmaker Steve Mestas, who has matched all of Rocili’s fights so far, says he likes Rocili’s power and dedication, as well as his southpaw right jab and finishing ability. He says that there’s no rush in matching him tough just yet.

“Right now I would not stick him in with no seasoned vet because he’s still a beginner and that’s not right,” said Mestas, who expects Rocili to be back in the ring in April.

“He’s in his learning stage but the kid shows me a lot of promise. He’s improving with every fight. I think he’s going places. ”

Where Rocili is getting plenty of tough work is in the gyms of Las Vegas. Among the people Rocili has sparred with are Fernando Vargas Jr., the undefeated pro and son of the former junior middleweight champion, as well as 2020 US Olympian Troy Isley and undefeated Premier Boxing Champions prospect Jesus Ramos.

Rocili also finds inspiration in his Filipino roots, and more specifically, the country’s storied legacy in boxing. Rocili met Manny Pacquiao in 2016, when he flew out to Los Angeles for his birthday to watch Pacquiao train.

“He was just telling me to keep up the good work. He was giving me praise. To this day I really look up to him because it shocks me how humble he is, in and out of the ring, ”said Rocili.

Rocili wears his heart on his sleeves and his cultural pride on his trunks, which are emblazoned with the Filipino flag. He feels that, if Filipino boxers can overcome their impoverished roots to become champions, he too can hurdle life’s obstacles to establish a legacy of his own.

“I really want to embrace my culture and just put it out there that Filipinos can do it, too,” said Rocili.

“They all come from nothing. In our younger years we’re so unfortunate, especially coming from Hawaii because it’s really expensive so we do not really come from much. I think, if they can make it, I can make it too. ”

Ryan Songalia has written for ESPN, the New York Daily News, Rappler, Vice and The Guardian, and holds a Master’s degree from the Craig Newmark Graduate School of Journalism. He can be reached at [email protected]