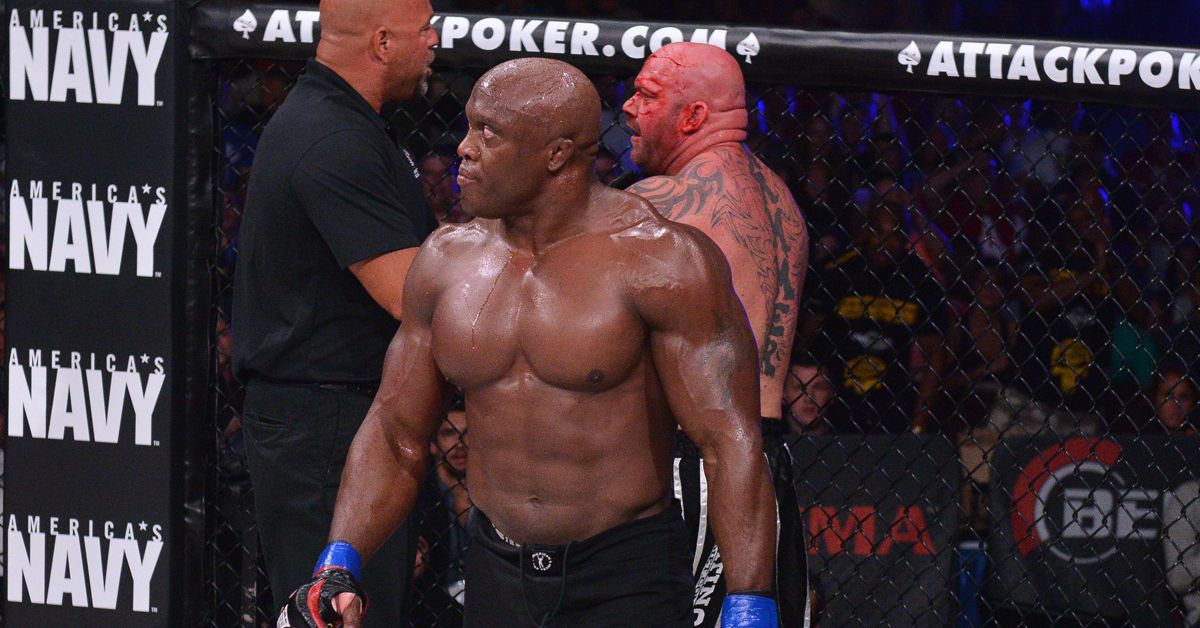 Bobby Lashley finally gets to square off with Brock Lesnar on Saturday. But had their careers shaken out differently, that meeting could have happened in the cage instead of the ring.

Ahead of the WWE’s annual Royal Rumble event in St. Louis, Mo., Lashley appeared on The MMA Hour and spoke at length about his connection to Lesnar, a fellow professional wrestler-turned-MMA fighter who he hadn’t even properly met until recently. Lashley was asked how he stacks up to Lesnar as far as their actual martial arts games compare and he politely described himself as being the more well-versed competitor.

“Without trying to disrespect him, I do not know what he’s capable of doing as far as skill-wise,” Lashley said. “I mean, I taught boxing, I taught jiu-jitsu at my gym, and what I tried to do was I ran with Strikeforce there for a while and then I had a little hiccup where I took some smaller fights and when I did those smaller fights, what I was doing was sharpening my ax, that’s what I used to say. I was really learning my boxing, really taking sometime to get some jiu-jitsu in there, sharpening my wrestling skills. So I turned into something of a student of the game.

“So as far as skill for skill and knowledge for knowledge, I think I have a lot more than he does in it.”

Lashley might not have achieved the same level of notoriety in MMA as Lesnar, who won the UFC heavyweight championship in 2008 and successfully defended it twice, but he found his own success competing for such promotions as Bellator and Strikeforce. The 45-year-old last fought in 2016, finishing his pro career with eight straight wins and a 15-2 record.

He has since returned to pro wrestling where he captured an elusive WWE Championship last March (Lashley first debuted with the company in 2005 following a successful NAIA wrestling career). Lashley lost that title in September, but has the chance to regain it when he headlines the Royal Rumble opposite Lesnar on Saturday.

It will be the first one-on-one professional wrestling bout between the two heavyweights, an encounter that was years in the making. Lashley explained why it took so long for them to finally be booked in a match.

“I can honestly say at the beginning that we just never crossed paths,” Lashley said. “That was the crazy thing. When I came into wrestling, he was still on the show, but I was in developmental. When I got moved on to the main roster, he left, then I was on the main roster for a while and then I take a break and then he came back and I was fighting [in MMA]. When I was fighting, I was fighting for Strikeforce at the time and I do not think even when we were fighting we were fighting at the same time. So he was back and then I came back and I did stuff with Impact [Wrestling] and he was kind of fighting and when I went to WWE he was gone. Then after my first year back, after 16, 17 years, he came back and I was like, ‘Man, you know, this is different,’ because it’s one thing that we did not cross paths – and when I say we didn ‘t cross paths, like, we never met – I met Brock maybe about two years ago and that was in brief, brief passing.

Lashley is referring to WWE Superstar Roman Reigns being forced out of a match with Lesnar earlier this month due to Reigns testing positive for COVID-19, a situation that led to a reshuffling of the WWE’s Day 1 event. Lesnar was to wrestle Reigns, so he was instead added to a multi-man match that included Lashley and ended with Lesnar winning the WWE Championship. That bout included Lashley and while the interaction between the two was limited, it set the stage for Saturday’s clash.

As far as there being any backstage animosity that might have prevented them from wrestling in the past, Lashley chalks it more up to timing than Lesnar looking past him.

“It would have happened right away,” Lashley said of why they were not booked as soon as they were both back under the WWE umbrella. “I’m not saying just him, but he has people that speak for him. I know at the time Brock being such a big name and him coming back and wrestling, he was going for who’s at the tip-top. So he had that match with Kofi [Kingston], he has a match with Roman, he had that match there, and when I came back I was fighting my way back to the top. I was not the world champion at the time. The match seemed great, but I had nothing that he wanted.

“So when I actually won the WWE Championship, that was the one thing that I said in the first interview that they asked me. They said, ‘What next?’ They asked me about Brock and I said, ‘Before, Brock really had no reason to come after me.’ I showed the title, I said, ‘Now he does.’ But he was not really in at the time and then when he did come back, him and Roman started doing some stuff together, so it was kind of like the timing was off. The timing’s always been off with us. ”

Lashley’s plan is to have his hand raised at the Royal Rumble and then again dangle the WWE Championship in front of Lesnar to entice him to sign on for a massive rematch at WrestleMania 38 in April.

He also aims to set the tone in their first match and Lashley claims that he’s willing to go off-script – and utilize his MMA training – to make a point.

“This is a match that should have been happening at WrestleMania,” Lashley said. “It does not like it still can not. Just because the first time that we go out there it’s a little sudden, I believe it’s a little sudden, but I think that there’s a lot of things that are around that match that could and may happen, but ultimately just for us to get in there and start squaring it off I think it’s gonna be something that a lot of people want to see. And for me, it’s not just a pro wrestling match. People want to see who’s gonna get that first takedown, who’s the better wrestler. People want to see if he pulls guard, if I pull guard, if there’s gonna be some ground-and-pound. ”