Bona Looks to Bounce Back Tuesday Versus Fordham 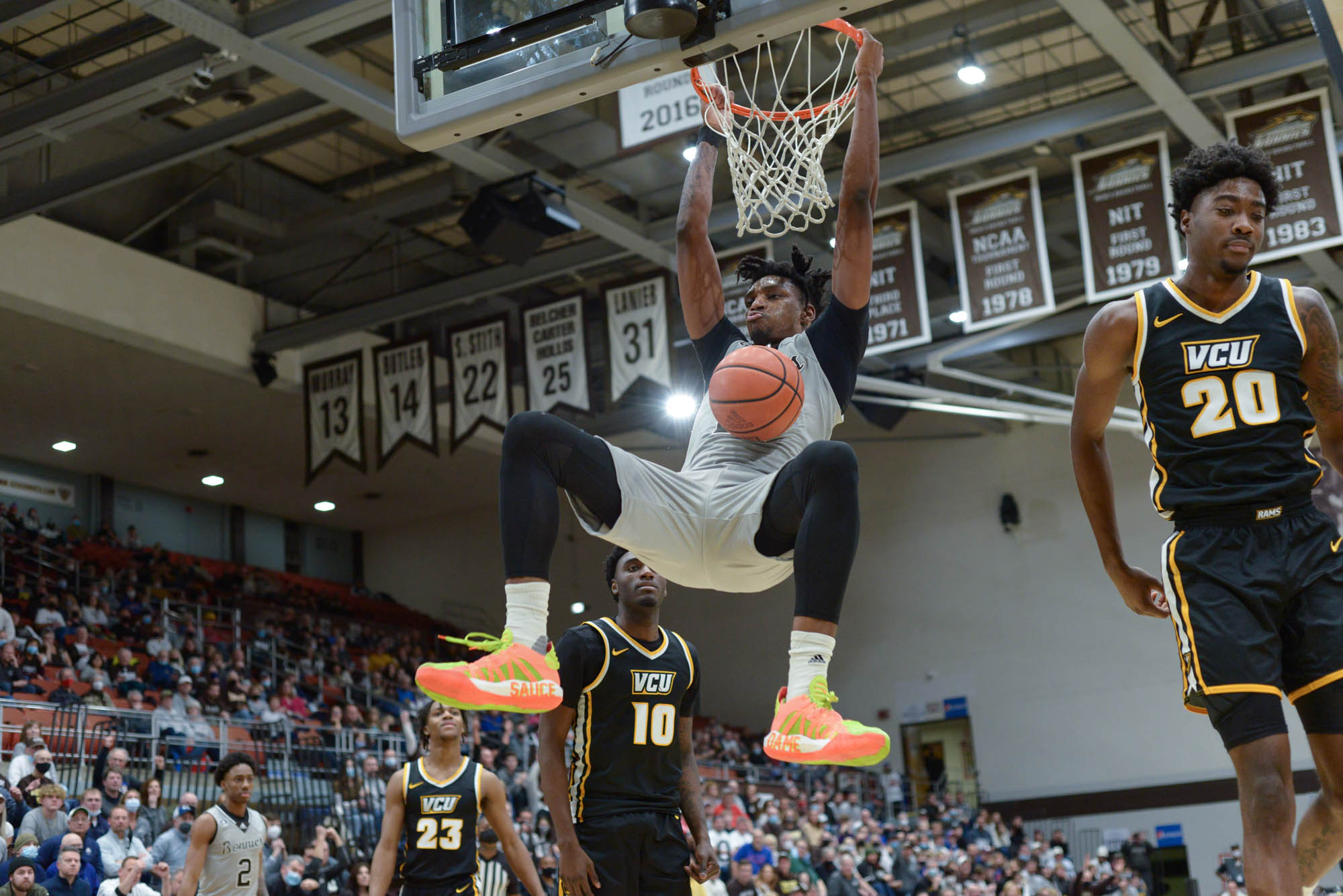 ST. BONAVENTURE, NY – On the night of Thanksgiving, St. Bonaventure friends, family, and alumni were feasting on their turkeys while celebrating their team’s 5-0 start. That terrific start included a clean sweep of Boise State, Clemson, and Marquette in Charelston, which sent the Bonnies flying up the rankings. On the morning of Nov. 22, the Bonnies were ranked 16th in the Associated Press Top 25, which was their highest ranking in 50 years. Excitement levels were at an all-time high.

The Bonnies have posted a record of 7-7.

Perhaps the St. Bonaventure Bonnies (12-7, 4-4 Conf.), And their fans, over-indulged in the hype too early this season.

With Valentine’s Day now quickly approaching, the Bonnies find themselves ranked 7th in the conference standings while sputtering along on a two-game losing streak. Nobody envisioned the preseason favorites being in this predicament.

But with roughly ten games to go, the Brown and White still have time to right the ship. They just have to work hard to do so.

The Bonnies will try to bounce back on Tuesday night when they host the Fordham Rams (10-11, 3-6 Conf.) At the Reilly Center.

Tip-off is slated for 7 pm and the game will air on ESPN +.

The Fordham Rams joined the mighty Atlantic 10 conference in 1995 but have yet to have any sustained success. Unsurprisingly, the Bonnies have dominated Fordham as of late, having now won 10 in a row versus the Rams.

But things are starting to change in the Bronx.

Kyle Neptune is in his first year at Fordham as the team’s head coach. He came to the Bronx after spending eight seasons under Jay Wright at Villanova as an assistant coach. The Brooklyn, New York native has his Rams competing, showing glimpses that Fordham may emerge as a contender, not a bottom-feeder, in the near future.

“If you look at [Fordham], they play very hard and that’s a testament to the coaching staff and those players, ”Schmidt said when asked about the Rams. “They are really competing.”

Fordham has played hard despite facing some difficult obstacles.

First and foremost, playing for a rookie head coach is never easy. It’s always difficult for a coach to set the ground rules, develop a system, and establish a recruiting pipeline early on. But the Rams currently sit just one game below .500 and are not the worst team in the conference. That’s a step in the right direction considering this program has finished above .500 in Atlantic 10 play just twice over the past 27 seasons: in 2005 and 2006.

Secondly, the Rams had a lengthy COVID-19 break at the beginning of January. As Bona fans know, it’s never easy to emerge from a long lay-off with fresh legs.

And then perhaps most importantly, Fordham lost their best player and leading scorer, Antonio Daye Jr., on Jan 13. At that time, Daye was averaging 16.8 points per game (PPG). But he withdrew from Fordham University due to personal reasons, according to Samuel Basel of A10 Talk.

Clearly, the Rams have had some bumps in the road as of late.

But they still have two solid players in Darius Quisenberry and Chuba Ohams.

Quisenberry, who transferred to Fordham from Youngstown State, currently averages 17.7 PPG, which is tied for first in the conference. The Springfield, Ohio native shoots 33.5% from beyond the arc and 38.5% overall. He has the potential to explode offensively, as he can score 20 or more on any given night. Back on Jan. 22, in a three-point loss to Davidson, Quisenberry finished with 36 points. He also scored 23 versus Richmond and chipped in 19 more most recently at St. Joseph’s.

Last season, while still at Youngstown State, he was selected to the Preseason All-Horizon League First Team. He dished out over 300 assists while playing for the Penguins, so he can share the wealth too. Quisenberry can give the Bonnies some issues with both his scoring and passing capabilities.

Inside, Ohams patrols the paint. The 6-foot-9 senior currently averages 11.1 rebounds per game, which leads the conference by a wide margin. He also averages 13.7 PPG. He has some of the best post-moves out of any big man in the Atlantic 10, so St. Bonaventure’s Osun Osunniyi will have his hands full working against Ohams.

As such, this game serves as an opportunity for the Bona defense to regain some confidence.

Last season, the Bonnies gave up just 59.1 PPG, which ranked third nationally. Their stifling defense was the main reason why the Brown and White swept both the Atlantic 10 Regular Season and Tournament Titles. But it’s been a different story this year. Bona has given up 68.6 PPG so far this season. Hence why this team has not lived up to expectations.

With that said, the Bonnies cannot afford to take Fordham lightly. The Rams have been competitive against several Top 100 teams, such as Miami, Davidson, and Dayton. After all, Fordham’s defense has been much improved under Kyle Neptune. Fordham ranks 77th in defensive efficiency whereas the Bonnies rank 166th in that same metric, per KenPom.

For the first time since February 2020, the Bonnies have lost back-to-back games. If they want to turn this season around, the first step is to take care of business against Fordham at home. There is still a chance for Bona to secure a Top 4 seed in the conference tournament, but in order to do that, the Bonnies need to start winning.

Once again, outside shooting killed the Bonnies against both Davidson and Richmond. Thankfully for Bona, Fordham does not have the three-point shooting prowess that the Wildcats and the Spiders possess. As such, I like the home team to prevail in a low-scoring, defensive battle.

Jack Milko received his BA in Political Science from the College of the Holy Cross in Worcester, Mass. He is now working to get his MA in Sports Journalism from St. Bonaventure University. A lifelong fan of the Bonnies, Jack covers the team for @ A10Talk. Follow him on Twitter for more Bonnies coverage at @Jack_Milko.

Featured image courtesy of Dan Nelligan, St. Bonaventure Class of 2020, who serves as a photographer for @ A10Talk.

Jack Milko recently graduated from the College of the Holy Cross in Worcester, MA. A native of Rochester, NY, Jack grew up a St. Bonaventure Bonnies f …

Back in February, a key member of the Tampa Bay Buccaneers offense sent shockwaves through the NFL when he announced his retirement after...
Read more
NHL

BRANDTA Wisconsin native and graduate is coming back home to Madison as Andy Brandt, a 2006 NCAA champion, is joining the Badgers' men's...
Read more
Technology

In only a matter of days, Liverpool will discover if they are to add the Premier League title to their collection of trophies...
Read more
Load more