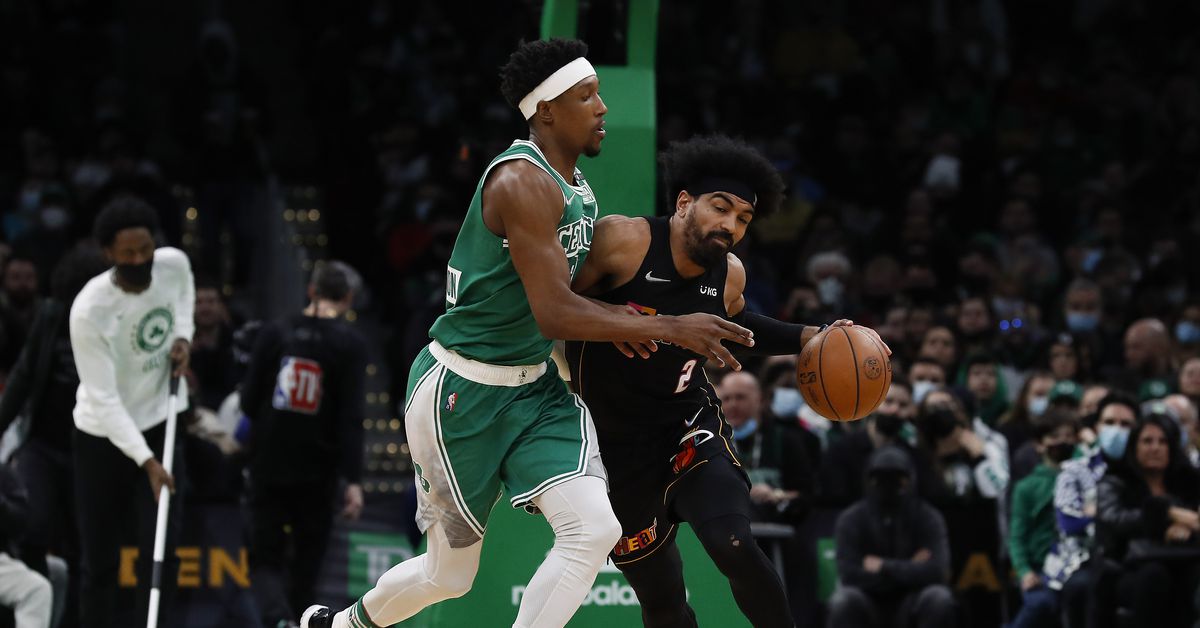 Seeing Max Strus returned to TD Garden and hit 9-of-17 from three alone in the box score would’ve signaled another spooky night for the Celtics. Instead, last season’s Celtic training camp invitee became the exception through an ice cold offensive night for the short-handed Heat. Boston ended the game early in the fourth, going on to win 122-92.

This season early on became about boiling offense back to the fundamentals, solving facilitation and connectivity issues that plagued the team in recent years. Boston’s woes against the Miami Heat zone in the 2020 east finals became a wake-up call to that overarching problem, and they’ve had fits with drop defenses, blitzes and zones that prevent the Celtics from accessing the paint ever since. They solved those problems throughout back-to-back wins over the Pelicans and Heat that extended Boston’s recent run to nine wins over their last 13.

Smart played the middle in New Orleans, letting Brown and Tatum become shotmakers on their way to a league-high fourth game where they each scored 30 points, and Smart matched his career-high with 12 assists. Miami sat Jimmy Butler and PJ Tucker, among others on Monday. Bam Adebayo played though, and the Celtics knew they’d see zone quickly.

“You go put yourself in a spot where there’s nobody,” Smart explained on Saturday on breaking the zone. “They have rules in the zone, certain guys guard certain spots, so just trying to find that open spot… especially when you get in the middle, you force the zone to have to make decisions… because you’ve got so many decisions in the middle. You’ve got Rob down there in the dunker (spot), because most teams aren’t going to help off him, which means… there’s somebody in front of you, one of the corners are open, and you’ve got to find the right place to get the ball. ”

They built a 15-point lead anyway, much like they did in their victory to start the season in Miami, holding the Heat to a 6-for-21 start and attacking Caleb Martin, Gabe Vincent and Duncan Robinson with Boston’s large starting unit. They sent Robert Williams III downhill, Smart again manning the high post on and finding Williams III on a delayed pick-and-roll.

Tatum hit a pair of jumpers over Martin and Vincent and even got in the high post to initiate a passing sequence that found Grant Williams for an open three-point look against a Heat defense that had swung right-to-left.

Smart found Al Horford for three, then got Horford the switch that hit Robinson with an early foul, the big man following with a hook shot inside that helped push the Celtics ahead 18-7.

Boston extended that lead to 13 into the 2nd quarter, but Tyler Herro’s entry spelled trouble for Grant Williams and Boston’s perimeter players, even after Grant laid down an impressive first-quarter block on the sixth man of the year candidate.

Herro hit back-to-back shots over Grant and Horford, Strus buried his first three and Chris Silva grabbed an offensive board through Boston’s switching miscommunication, then hit Kyle Guy for a three to get back within seven.

Ime Udoka turned towards the Smart and Schröder combination and the offense completely jammed. The pair missed three-point jumpers, Smart botched a pair of free throws, Brown added another miss, while Herro and Strus extended the Heat run to 16-1 to tie the game at 32.

Udoka’s timeout and lineup adjustment quickly quelled the collapse. The offense worked the ball around to Brown for a three, Smart stole the ball from Martin and ran it back for a layup, before Brown canned a mid-ranger and righted the ship for the rest of the game.

Even loud dunks from Martin and Adebayo over Williams III could not overcome the Celtics’ shooting, pace, movement and offensive rebounding midway through the game. Horford grabbed a Brown miss from deep and handed it to Tatum, who fired a pass to Smart for a three from the deep post in traffic. Tatum pulled up for a three a possession later and drove for an acrobatic finish a play after that. Boston led 54-45 at halftime.

Brown and Tatum both started 5-of-10, finding each other with sharp movement and passing into the third quarter to go up 71-57. Smart hit Tatum on a quick entry for a three, Tatum and Brown played through Horford in the corner to get Brown a three.

Brown attacked in the half court, Tatum ran ahead of Williams III’s steal for a dunk, then Brown used his leverage to find Grant for back-to-back threes. Miami could only draw as close as in the second half 11 on spot threes late in the third from Robinson, who received his third foul early, then Strus and Herro.

The Heat went scoreless on seven of their last eight possessions in the frame, their lack of penetration and shooting easy for Celtics defenders to keep in front of them. The Heat ended up resorting to launching long shots into the fourth and did not find much more success, scoreless on six of their first eight sets in the fourth, even with two possessions where they had multiple chances following offensive rebounds.

Brown and Dennis Schröder scored eight straight points and put the Celtics ahead 102-74, and the benches, including a rare Udonis Haslem sighting, spilled into the game. The Celtics return to TD Garden on Wednesday night, seeking revenge against the Hornets.

Fantasy Baseball News - May 17, 2022 Willson Contreras was the driving force behind Chicago's 9-0 win over Pittsburgh on Monday, going 2-for-5 with...
Read more
NFL