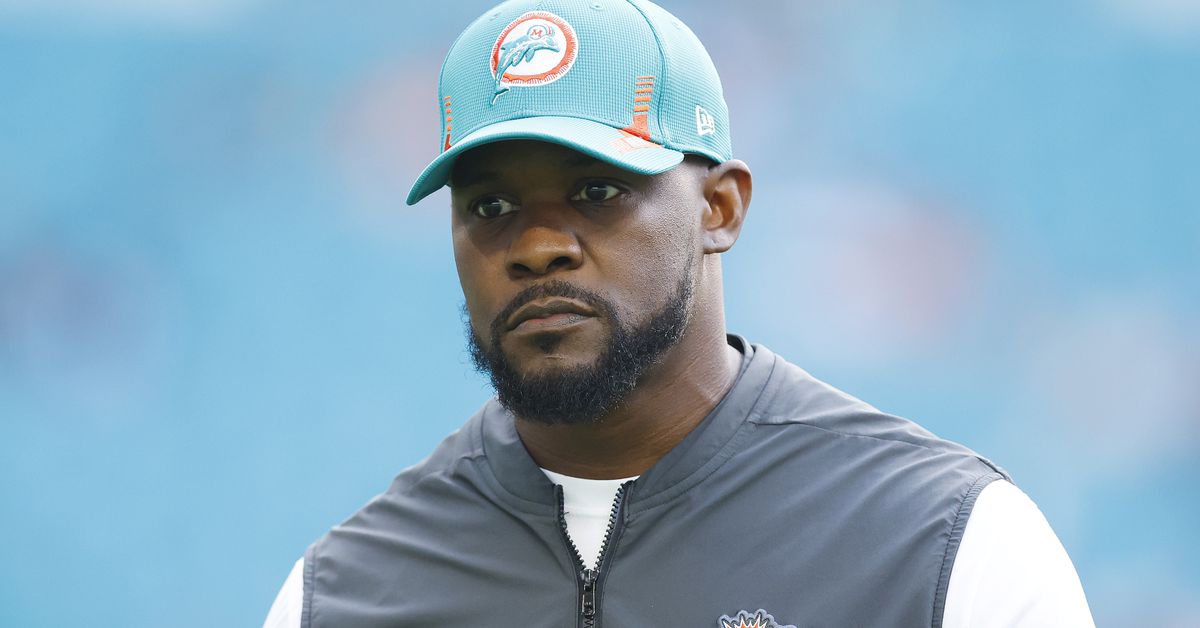 Brian Flores is suing the National Football League and the New York Giants,

Here is the text Flores allegedly got from Bill Belichick:

“Sorry – I fucked this up. I double checked and misread the text. I think they are naming Brian Daboll. I’m sorry about that. BB. ”

– The lawsuit alleges that Belichick sent this to Flores three days before Flores interviewed the Giants.

The lawsuit states, in part:

“.. last week, Defendant New York Football Giants, Inc. (the “Giants” or “New York Giants”) had an opportunity to move a step in the right direction, if even only one. The Giants had the chance to hire Mr. Flores, an eminently qualified Black man, to be the first black head coach in the Giants’ nearly 100-year history.

“Instead, the New York Giants made the decision to hire Brian Daboll — and disclosed that decision to third parties — during a time when the Giants were scheduled to still interview Mr. Flores and when Mr. Flores was deceptively led to believe he actually had a chance at this job.

Thus, on Wednesday, Jan. 26, 2022, Mr. Flores was forced to sit through a dinner with Joe Schoen, the Giant’s new General Manager, knowing that the Giants had already selected Mr. Daboll. Much worse, on Thursday, Jan. 27, 2022, Mr. Flores had to give an extensive interview for a job that he already knew he would not get — an interview that was held for no reason other than for the Giants to demonstrate falsely to League Commissioner Roger Goodell and the public at large that it was in compliance with the Rooney Rule.

The Giants would likely have gotten away with this most insidious form of discrimination if New England Patriots Coach Bill Belichick had not mistakenly disclosed it to Mr. Flores in the below text messages.

“God has gifted me with a special talent to coach the game of football, but the need for change is bigger than my personal goals. In making the decision to file the class action complaint today, I understand that I may be risking coaching the game that I love and that has done so much for my family and me. My sincere hope is that by standing up against systemic racism in the NFL, others will join me to ensure that positive change is made for generations to come. ”

Statement from the Giants

“We are pleased and confident with the process that resulted in the hiring of Brian Daboll. We interviewed an impressive and diverse group of candidates. The fact of the matter is, Brian Flores was in the conversation to be our head coach until the eleventh hour. Ultimately, we hired the individual we felt was most qualified to be our next head coach. ”

Mara had been asked about the fact that there was only one Black head coach in the NFL last week at GM Joe Schoen’s introductory press conference – the day before Flores interviewed the Giants. Here is what he said:

“The NFL and our clubs are deeply committed to ensuring equitable employment practices and continue to make progress in providing equitable opportunities throughout our organizations. Diversity is core to everything we do, and there are few issues on which our clubs and our internal leadership team spend more time. We will defend against these claims, which are without merit. ”

Burnley caretaker Michael Jackson on the penalty decision which led to Tottenham's winner in their 1-0 victory: “I watched it back and I...
Read more
Load more