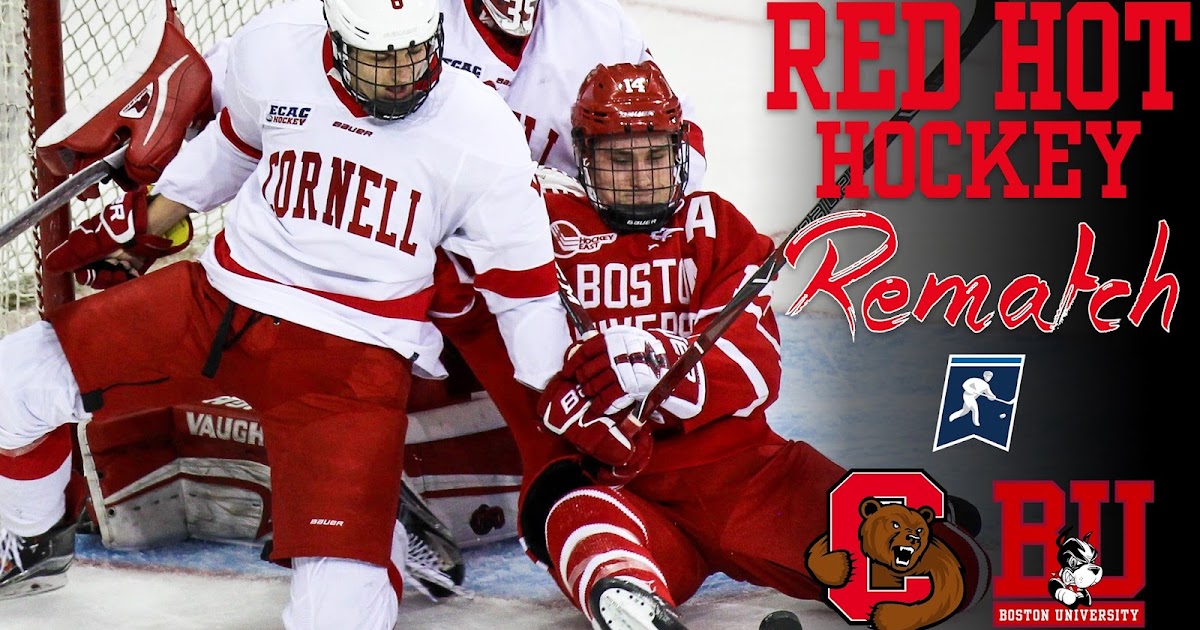 So, now you’ve probably heard that number 13 BU won the Hockey East Championship last weekend. You probably also caught wind of the Terriers playing in a Red Hot Hockey rematch against No. 4 Cornell in the opening round of the NCAA Tournament Saturday afternoon in Worcester, Mass.

Cornell, unlike BU, lost last weekend in the semifinals of the ECAC tournament against Princeton, 4-1, at the Olympic Center in Lake Placid, NY. their second consecutive NCAA tournament. A year ago, Cornell was suspended 5-0 by UMass-Lowell in the first round in Manchester, NH.

BU (21-13-4), on the other hand, are making their fourth consecutive trip to the national tournament. This is the longest series in program history since the 1990s when the Terriers ran eight consecutive appearances from 1990 to 1998. This is the first time that BU has been selected to play in an eastern region while not a one-man show or a tournament host. since the NCAA adopted the 16-team format in 2003.

“It’s nice because the last few years we’ve been in the west,” coach Dave Quinn said. “It will be nice to have a little supporter. Hopefully we get a big crowd. Our crowd over the weekend was outstanding. I think it has a bit to do with the way we played. Our guys feed that energy. ”

Along with fan support, one of the main factors enabling BU to go on their immersive playoffs was the game of their top line. Drew Melanson, Brady Tkachuk and Jordan Greenway have been a dominant force since Greenway returned from Olympic competition at the end of February.

Since Greenway returned to campus, Melanson has scored four goals, including three in Hockey East Tournament alone. Not to mention, on Saturday he recorded the match winner against Providence on a play where both Greenway and Tkachuk won fights below the goal line to find the RPI transfer alone.

“I think we all compliment each other pretty well,” Melanson added. “Those two guys can be real animals. “Both think the game is very good, and it just gives me more opportunity to play offense.”

Explore the Big Red
The Madison Square Garden event last November yielded a 4-3 Cornell victory, but it was not without serious pressure from the Terriers in the later stages of the game. BU was 3-0 behind in the third period and brought it to 4-3 before the last buzz killed the BU comeback.

BU has aged a lot since the first meeting in the Big Apple. Coach Quinn quickly pointed that out after practice Thursday afternoon.

“It’s funny, we watched the game and I can not tell you how many times I said to myself: ‘Oh, we do not do it anymore.’ There is just a lot more continuity. I think it will be a very different hockey match than the one that people saw in November. “

Cornell is an extremely balanced team, with not a single dominant figure on the statistics sheet. In fact, four players scored more than 20 points and a staggering 15 skaters hit the double watermark. That said, the hallmark of this Cornell team is defense.

“They play similar styles. It will be that strong, tough, down-to-earth meal that we faced against Providence, ”Quinn said.

Junior Anthony Angello comes offensively from the group, scoring an equal of 13 goals and 13 goals for 26 points on the year. Right behind him is Trever Yates. Yates, a Beaconsfield, Quebec senior, has 25 points on a dozen goals and 13 assists. Other players to watch include Alex Rauter, Jeff Malott, Mitch Vanderlaan and Brenden Locke.

Between the pipes, Matthew Galajda was nothing short of incredible. The Aurora, Ontario freshmen have a save percentage of .940 and a 1.49 goal average, to go along with his 21-4-2 record. Galajda was recently named a finalist for the Mike Richter Award for the country’s top goalkeeper. The other finalists are Denver’s Tanner Jaillet, Cale Morris of Notre Dame, Colton Point of Colgate and Northeastern’s Cayden Primeau.

“You have to make him move and you have to take his eyes off,” Quinn explained how to beat the tough Cornell net keeper. “No matter which goalkeeper you play, you have to get there [in front of the net] and you must make it difficult for him. One of the things we talked about is, you have to be the goalkeeper. Who is going to stand on top of him? If we do that, we have a chance to score. ”

History
BU and Cornell have played in the NCAA Tournament twice before and both games were on the big stage. In 1967, a goalkeeper named Ken Dryden returned the Big Red to a 4-1 victory and their first national title in program history. BU took revenge five years later and won the National Championship against Cornell in 1972 at Boston Garden by a score of 4-0.

Puck drop is scheduled for 13:00 Saturday afternoon in Worcester.