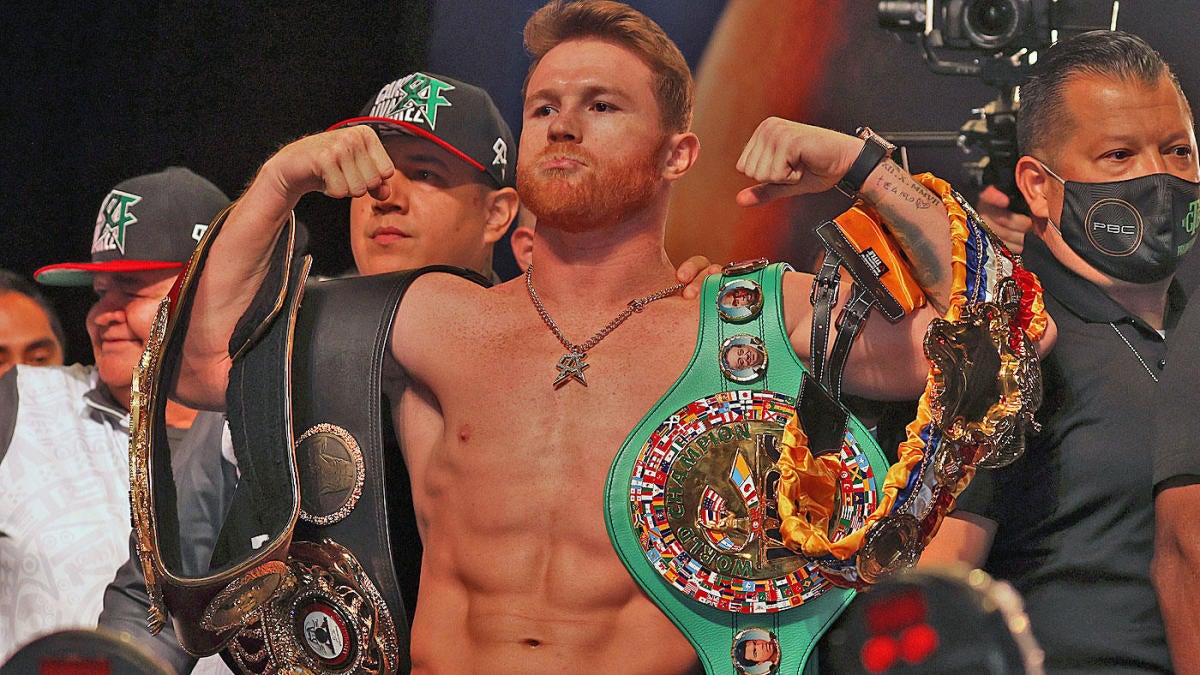 As the biggest star in boxing and its consensus, pound-for-pound best fighter, Canelo Alvarez can do just about anything he wants to when it comes to matchmaking. Luckily for fans, the 31-year-old Mexican superstar has consistently used his powers for good of late as a promotional free agent, using the majority of 2021 to unify all four super middleweight titles for the first time in history en route to claiming Fighter of the Year honors.

So what type of challenges might Alvarez (57-1-2, 39 KOs) seek in the new year? Let’s take a look at where things stand in 2022 for the four-division champion.

Alvarez pondering a pair of May offers, per report

Although we know that Alvarez has outlined May 7 as his most likely return date after taking some time off, ESPN’s Mike Coppinger spoke with several sources concerning two offers that Alvarez is currently considering.

The first offer would see Alvarez agree to a one-fight deal with Premier Boxing Champions to defend his undisputed 168-pound title against WBC middleweight champion Jermall Charlo. The fight would presumably air as a pay-per-view on either Fox or Showtime, with the latter being the home of Alvarez’s most recent conquest against Caleb Plant last November. Charlo (31-0, 22 KOs), the twin brother of WBC 154-pound titleholder Jermell, offers an intriguing mix of speed, power and boxing technique for Alvarez and he also has a big frame that should make moving up to super middleweight an easy transition.

The second offer, which came from Matchroom Sport’s Eddie Hearn, might be a more intriguing one considering it’s a two-fight deal. Hearn, who promoted Alvarez throughout 2021 regardless of which network he competed on, has a broadcast deal with the streaming app DAZN, which recently made its own move to PPV after initially claiming it was created to eliminate the platform.

The first fight of the deal would be targeted for May against WBA light heavyweight champion Dmitry Bivol (19-0, 11 KOs) in Alvarez’s return to the 175-pound division after knocking out Sergey Kovalev for the WBC title in 2019 before vacating it. The second bout would be in September in a super middleweight title bout against IBF middleweight champion Gennadiy Golovkin (41-1-1, 36 KOs). The fight would be the third meeting between Alvarez and GGG following a pair of thrilling decisions in PPV blockbusters that included a disputed draw in 2017 and a close Alvarez win the following year.

Where things stand with moving up to cruiserweight

Alvarez’s trainer / manager, Eddy Reynoso, surprised the boxing world (and apparently Alvarez, himself) last November when he made a plea at the WBC convention in Mexico for Alvarez to be cleared by the sanctioning body to challenge cruiserweight champion Ilunga Makabu. Initially, the fight appeared to be a done deal until Makabu promoter Don King announced an immediate title defense first for Makabu against Thabiso Mchunu for January. Although Alvarez publicly showed respect for Reynoso’s surprise move, all signs since then have pointed to Alvarez focusing instead in 2022 on big-time fights at 168 and 175 pounds. A move up to cruiserweight would surely be the kind of dare-to-be-great attempt akin to Manny Pacquiao winning a world title at 154 pounds or Roy Jones Jr. claiming a heavyweight belt. But it would not be a massive event given Makabu’s low profile globally and even rumors of the fight brought on a surprisingly negative response from Alvarez’s critics who considered his advantage in skill too wide to make it a competitive fight, even with the massive size differential .

What other names could be on the table?

Former super middleweight champion David Benavidez (25-0, 22 KOs), who twice lost his WBC title outside of the ring for missing weight and failing a drug test, has been very vocal about seeking an All-Mexican war against Alvarez. The fight has the potential to be both a PPV success and a thrilling contest given Benavidez’s size, daring style and deceptive speed. Alvarez has also toyed with the idea of ​​making a full-time move to light heavyweight in hopes of unifying titles in a similar manner to what took place at 168 pounds last year. Along with Bivol, the other light heavyweight champions offer interesting potential options, including the powerful (yet raw) WBO titleholder Joe Smith Jr. (28-3, 22 KOs) and unified WBC / IBF champion Artur Beterbiev (17-0, 17 KOs), who is rated among the pound-for-pound best in the game and could be the most dangerous challenge for Alvarez.

After an ambitious stretch of three fights in 2021 and a total of four over a 12-month stretch dating back to December of the previous year, Alvarez appears focused on returning for the two most important dates on the boxing calendar: Cinco de Mayo weekend in May and Mexican Independence Day weekend in September, with both taking place in Las Vegas. Although Alvarez hinted that he could be interested in as many as three fights this year, it’s more likely he returns to the same traditional schedule of May and September fights, which previous PPV kings Floyd Mayweather and Oscar De La Hoya set the template for.