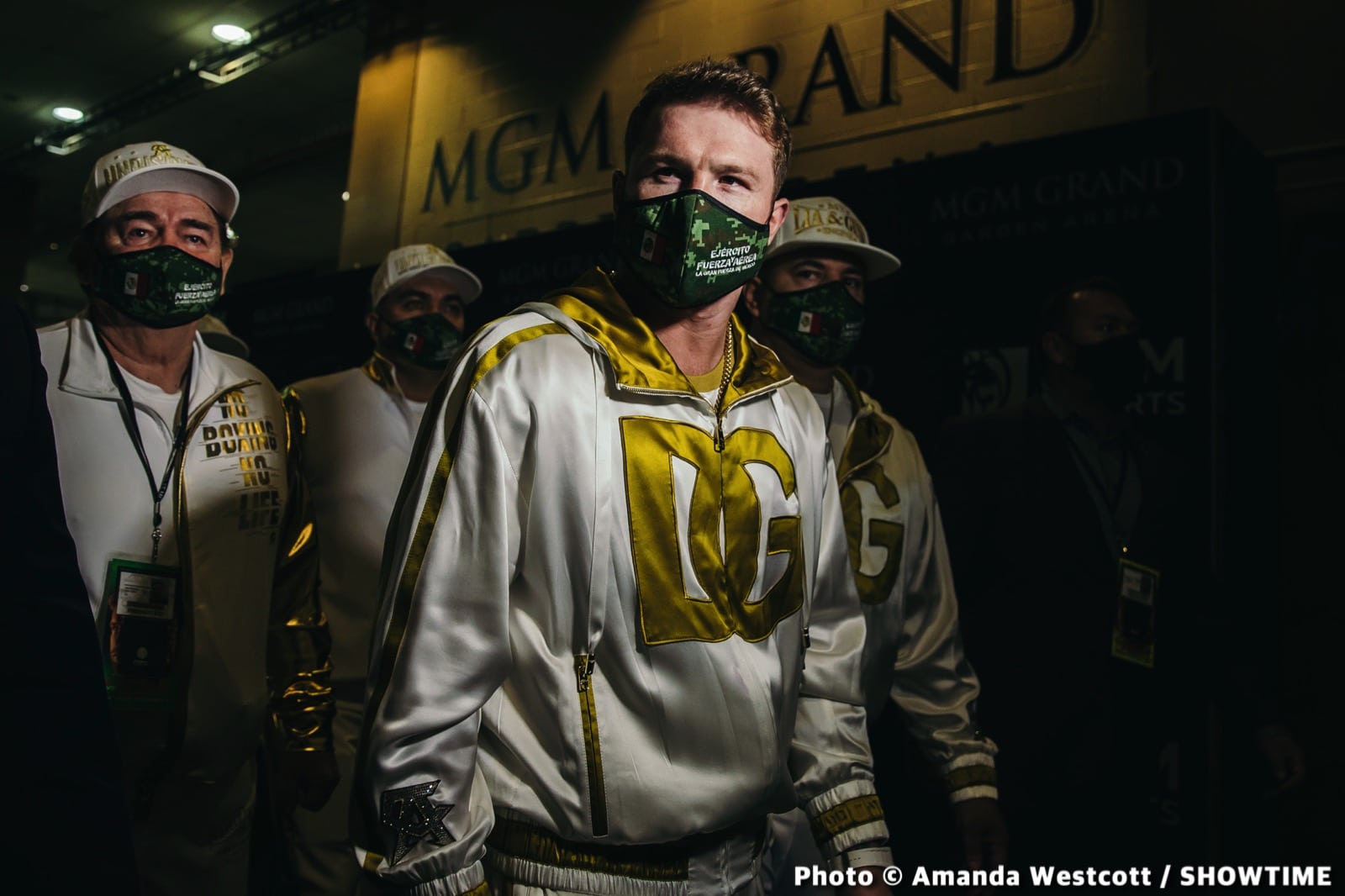 Coach Robert Garcia wants to see Canelo Alvarez fight Jermall Charlo or Gennadiy Golovkin next on May 7th in his first match in 2022.

Robert feels that a fight between the undisputed super middleweight champion Canelo (57-1-2,39 KOs) and the unbeaten Charlo (32-0, 22 KOs) would get a lot of boxing fans excited, and show the world that he’s NOT a cherry-picker that only selects the old & vulnerable for his fights.

The fact that Canelo still hasn’t chosen his next opponent suggests that he and his trainer / manager Eddy Reynoso are struggling to decide who they should pick.

It should be a relatively easy choice for Canelo & Reynoso to pick Charlo, David Benavidez, Golovkin, Demetrius Andrade, Artur Beterbiev, or Dmitry Bivol.

It’s not easy for Canelo to decide because he’s gotten used to fighting paper champions, and older fighters like Danny Jacobs, and Sergey Kovalev.

Canelo has not had a 50-50 fight in four years since his rematch with Golovkin, and it does not seem like he relishes the idea of ​​veering away from the easy opposition at 168 that he’s been facing since 2018.

“I think the three are big names and the fights that fans want to see. I think the third fight with GGG would probably be the one that maybe makes the most sense, ”said Robert Garcia to Fight Hub TV on who Canelo should fight on May 7th.

“They do have two fights, and most people think GGG won the first fight,” said Robert on his view that Canelo should fight Golovkin next in the trilogy match. “So, I think it would be good for him, but again, a Charlo fight would be insane.

“Everybody is talking about that fight, it’s a great fight, and they want to see that fight [Canelo vs. Jermall]. I think the most dangerous is the one at 175 because it’s a bigger guy, very strong, very dangerous.

“So, he might take a lot of risks there, but either one would be huge,” Garcia said of what Canelo would be up against in taking on light heavyweight champions Artur Beterbiev, Dmitry Bivol, or Joe Smith Jr.

There would be a lot of attention from boxing fans if Canelo faces Jermall on May 7th. If Canelo wants to shake the image of him being an opportunist, who only cherry-picks the weak & the vulnerable, he needs to fight Jermall Charlo this year.

If not him, Canelo must run the gauntlet by fighting Artur Beterbiev, Dmitry Bivol, Joe Smith Jr, or Demetrius Andrade in 2022.

175 will be tough for Canelo

“I do believe so,” said Robert when asked if he can see Canelo capturing titles at 175. “They are very strong and very tough, but he got the skills and talent to beat them. It will not be easy. I’ll be tough.

“Canelo could feel the same. The power, the strength, but it’s just a lot different but I see Canelo winning. Charlo is very skillful. He’s got great skills, and I’m sure he wants that fight so bad.

“Yeah, that would be difficult [for Canelo]but I do not see that [being a problem at 168]. But at light heavyweight, I think he’d have more complications.

“If he goes to cruiserweight, right now Canelo can do anything he wants. But going to cruiserweight against that champion [Ilunga Makabu] that they were talking about, even though it would make history, but I think him fighting Charlo, GGG or at light heavyweight, I think those fights are a lot more competitive, ”said Garcia.

Light heavyweight would be very tough for Canelo, particularly if he faces Artur Beterbiev in his first fight in the division on May 7th. If Canelo waits two or three years until Beterbiev is 39, it’ll be easier for him, but he will not get credit for beating him.

Canelo has already been given a lot of heat for waiting until Golovkin was 35 before finally fighting him for the first time. Also, it’s been four years since Canelo last fought Golovkin, and he’s only now considering giving him a trilogy.

If Canelo devotes 2022 to only fighting at 175, he’ll lose to Beterbiev, Dmitry Bivol, and Joe Smith Jr. Those three champions will beat Canelo, in this writer’s opinion, and that’s why he WON’T fight at 175 this year.

Canelo and his trainer / manager Eddy Reynoso know what they would be up against if they fought at 175 this year.

Alvarez will be criticized for cherry-picking

“I think it would be more making history and getting a fifth division world title,” said Robert on the possibility of Canelo fighting at cruiserweight. “He’d be the first Mexican to ever do it, so he’d be making history. But there would be a lot of, ‘He’s picking the easiest opponent to make history,’ which he’d get a lot of criticism. He always does anyway.

“I think I would do it if I was him. F *** it. People are still going to talk s ***, but he will get a lot of s *** for that, ”said Robert on what would happen if Canelo went up to cruiserweight to cherry-pick a belt from WBC champion Makabu.

Boxing fans would not mind so much about Canelo cherry-picking an easy title against the badly flawed WBC champion Ilunga Makabu if he’d faced quality opposition in the last four years.

The problem Canelo has is he’s been picking soft opposition since 2018, fighting weak champions like Caleb Plant, Billy Joe Saunders, and Rocky Fielding, but not fighting the quality fighters that fans have been asking for.

If Canelo were to go through this murderer’s row, fans would not care if he cherry-picked a belt at cruiserweight against Makabu: