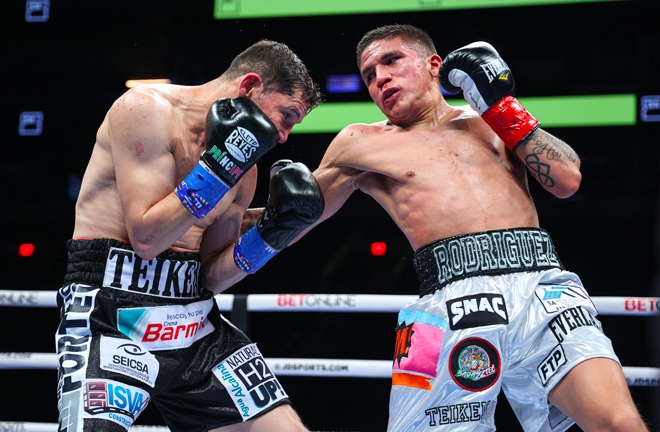 Jesse ‘Bam’ Rodriguez claimed the vacant WBC super flyweight title at the Footprint Center in Phoenix, Arizona, as he dropped Carlos Cuadras on the way to a unanimous decision win in the main event of this Matchroom promoted card on DAZN.

Cuadras came in as a former holder of the title, but was expecting to face Srisaket Sor Rungvisai in a rematch of their 2014 meeting, but the Thai had to withdraw with a week to go to fight night through illness. Cuadras was last out October 2020, stopped for the first time as a pro in eleven by Juan Francisco Estrada in a rematch of a 2017 thriller, also won by Estrada, by a single point on all three cards. Rodriguez was originally set to appear on this bill, but jumped at the chance of a world title shot at a weight above he was used to campaigning at. The Texan had never before been in any sort of world class action, and had never been past eight rounds as a pro.

After a back and forth opening couple of rounds, which Cuadras controlled with his busy style, Rodriguez uncorked a well-timed uppercut that floored Cuadras in the third, and that turned the fight on its head. Cuadras struggled to deal with the man from San Antonio’s speed, and he was hurt to the body in the fourth and rocked back by another uppercut in the fifth. After another good session in the sixth, Cuadras briefly rallied by dictating the pace in rounds seven and eight to get some kind of foothold, but the joy was short-lived, as the Mexican was hurt to the body again in round nine, and tagged by a four punch combination that he could not get out the way of in round ten. It looked a lost cause for Cuadras, and Rodriguez dictated the final two frames in what was a mature and polished performance as the fight went the distance.

Jamie Mitchell was last seen in October 2021 on UK shores, as she expertly wrenched the WBA bantamweight title from Shannon Courtenay in Liverpooland ‘The Miracle’ got Liverpudlian opposition for her first defense, in the form of Carly Skelly. With only five fights behind her, Skelly was no match for Mitchell, and was down in the opener from an overhand right from the champion. Skelly was down again, this time in delayed fashion in round two, and, two rounds later, she was taking a two fisted assault, and with her eyes glazed over, the referee wisely stepped in.

Raymond Ford somehow kept hold of his WBA Continental Americas featherweight title, defending his belt for the second time with a split decision win after ten rounds against Edward Vazquez, taking his unbeaten record in the process. Ford overcame a slow start to edge into the contest, but it looked as though Vazquez had done enough to get his hand raised. Somehow, two judges scored Ford a way too wide winner by scores of 98-92 and 97-93, while the third judges’ score of 96-94 was rendered redundant.

Fernando Diaz was originally slated to meet Jesse Rodriguez before ‘Bam’ was drafted into the main event, and the flyweight was involved in a thriller with Lorenzo Smith, who knocked Diaz down in the fifth round with a sweeping left hook before going down to a points defeat over ten rounds. Two scores of 96-93 and a third at 95-94 ensured Diaz took the win.

At heavyweight, Adam Stewart won every round of six against Alvin Daviescoring a knockdown in the final frame, and at light heavyweight, Khalil Coe scored a second round stoppage win against Dylan O’Sullivan. 18-year-old prospect Elijah Garcia forced Antonio Louis Hernandez to retire after three rounds of their catchweight encounter.

Erik Spoelstra looked forward to Game 5 following the Miami Heat's 102-82 loss to the Boston Celtics in Game 4 of the Eastern...
Read more
GOLF