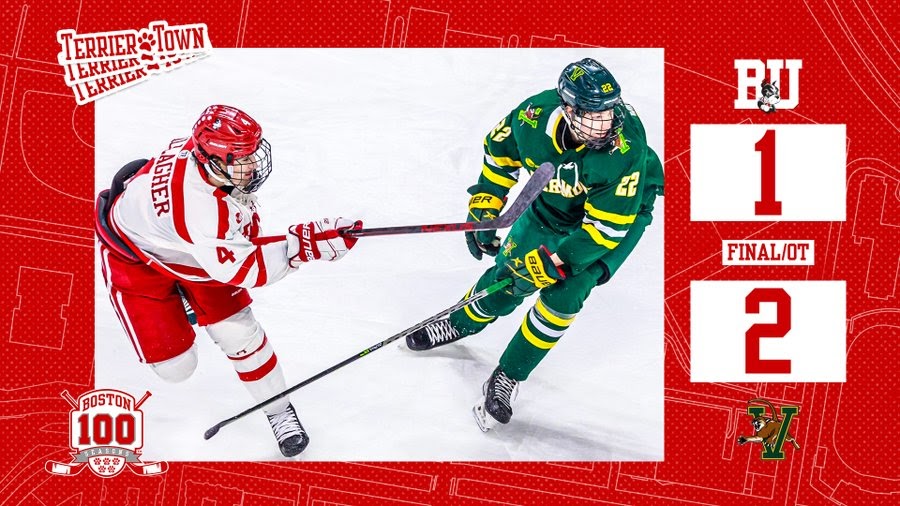 Terriers’ seven-game unbeaten streak was snapped Friday night with a 2-1 overtime loss to Vermont. For the Catamounts, the victory ended a five-game losing skid. BU fired 38 shots on goal — including 10 on three power plays — but could only beat UVM’s Gabe Career once.

The team’s face off again this afternoon at a 4 pm start.

BU had 13-2 shot advantage in the opening period and finally got on the board with four minutes remaining. Matt Brown stripped a Vermont defender in the left corner, skated behind the cage and snaked the puck through three Catamounts to Robert Mastrosimone for a tap-in at the left post.

Great work down low from Skoog, Brownie and Mastro sends us to the first intermission with a 1-0 lead! pic.twitter.com/wVxFs0aTHc

The visitors tied the score two minutes into the middle period when a Terrier clearing attempt was kept in the zone by UVM. Eventually, Timofei Spitserov‘s shot from the left circle flew past a well-screened Drew Commesso.

Both goalies were sharp throughout the next 38 minutes as the score remained deadlocked at 1-1.

In the 3-on-3 overtime, BU controlled the puck early on and Jay O’Brien made a strong move to get around a defender but his in-tight scoring try was defended by Carrier.

Then halfway through overtime, Dallas Comeau‘s shot from the left circle was stopped by Commesso but the puck bounced right to William Lemay who fired into the open side for the game-winner.

Commesso finished with 19 saves for BU

One streak did continue: with three penalty kills, BU now has killed its last 25 penalties.

An update to yesterday’s report on new recruit Jack Page. The 6’4 ”, 194 pound, left-shot defenseman is joining the Terriers for second semester, rather than next fall as we reported yesterday.

The West Chester, Pennsylvania native explained “I started talking to BU again this year around Thanksgiving about the possibility of coming in around Christmas time. The decision to join BU here for the second semester was officially made Wednesday night [Jan. 19]. ”

He added, “The coaches really like my ability to skate, especially for a guy my size. They also liked my hockey IQ and felt that I could step in the second semester. ”

2022 recruit Jeremy Wilmerscored a pair of goals and added an assist in Tri-City’s 5-1 win against Sioux Falls. With 44 points (13G, 31A), Wilmer is tied for third in USHL scoring.

2022 recruit Quinn Hutson scored his 18th goal in Muskegon’s 4-3 overtime loss to Youngstown. 2024 recruit Gavin McCarthy had an assist for the Lumberjacks.

Vermont also faced BU 50 years ago this weekend. The ’71 -’72 Terriers produced a dominating performance, a 7-2 win at Walter Brown Arena that improved the defending national champions’ record to 13-2-1.

Ron Anderson opened the scoring just a 1:15 into the game, converting a Ray Cournoyea pass. After Vemont tied the score, BU regained the lead on Bob Gryp‘s redirection of a Bob Brown shot and then extended it on Anderson’s second tally, a power-play goal.

The Catamounts narrowed the lead to one early in the second, but Mike LaGarde‘s 55-ft. shot restored the two-goal margin. BU put the game away in the third on scores by Brown, his blueline partner Ric Jordan and winger Dave Wisener.

Kevin Shattenkirk scored his seventh goal and added an assist in the Ducks’ 5-1 win against Tampa Bay.