Home Sports MLB Christopher Russo is wrong to think the Padres should "be patient" with...
SportsMLB 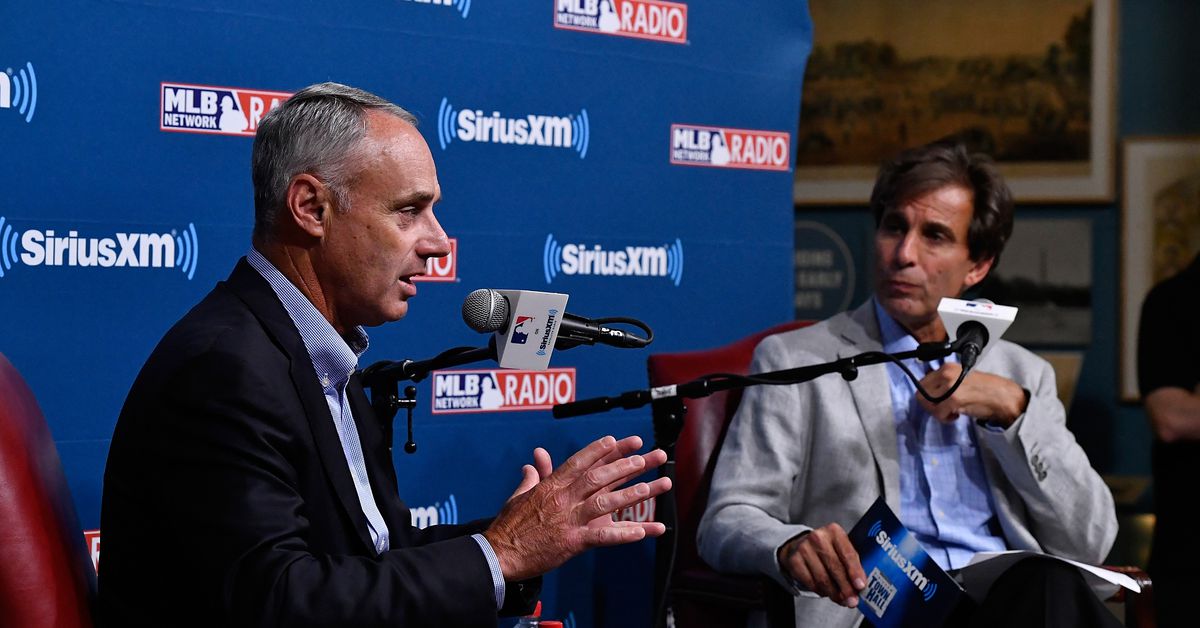 Newly hired by ESPN to debate Stephen A. Smith on Wednesdays during “First Take”, Christopher “Mad Dog” Russo appeared on the Darren Smith show on XTRA 1360 Wednesday afternoon at radio row ahead of the Super Bowl in Los Angeles.

When he was asked about the San Diego Padres potentially moving on from Eric Hosmer, he was not on the side of most Padres fans. “I thought Hosmer was a good signing there,” Russo said before randomly asking Darren if San Diegans care about the Chargers anymore. He then got back to talking about the 32-year-old: “You got to live with him. Hosmer’s won a championship. I know he’s making a fortune. When the team gets good, he’ll give you good at-bats and play good defense. Be patient with Hosmer. ”

“I do not think they have to cut payroll. They spent $ 600 million on two players. All of a sudden $ 140 million that Hosmer gets is too much money? I do not buy that so sit tight with Hosmer. When the team is good, he’ll play well. ”

Sorry Mad Dog. I love listening to you and I love your enthusiasm but you’re wrong about just about everything you said. The Hosmer signing was good at the time because it signaled that ownership was willing to spend big money and wanted to win. However, when the signing happened, it was pretty clear his best years already were behind him. Russo can bring up the championship in Kansas City all he wants but the fact of the matter is that happened seven years ago. In Hosmer’s four seasons with the Friars, his WAR is -4.

Moving to Russo saying Hosmer plays good defense … are you kidding me? Yes, he won four gold gloves (all with Kansas City by the way) but since coming to San Diego his defensive WAR is -3.6.

Does this look like good defense? (I do not endorse the title of this video by the way)

Russo told us to be patient with Hosmer but we’ve been patient enough. The Padres should not feel like they have to “live with him” like Russo suggested. It’s been four seasons of underwhelming performance out of a player who was supposed to be one of the main reasons why the Padres were going to be World Series contenders. He is now actually holding the team back not just on the field but off it as well. They’ve paid him a base salary of $ 80 million in his first four seasons as a Padre but according to FanGraphs, Hosmer’s been worth just $ 4.5 million. Having some more money to spend right now would not hurt.

Can Hosmer have a bounce back season with Michael Brdar as the hitting coach? Maybe. But based on his Padres career, it’s unlikely he’s going to turn into Freddie Freeman in his prime.

My final gripe with Russo’s Hosmer comments was him saying Hosmer will play well when the team is good. I have fell for the bait before about him being clutch (maybe I was just thinking about his baserunning play in the Game 5 of the World Series) and while that might be true in some situations, it is not true as a whole in the postseason.

In the 2020 NL Wild Card series against the St. Louis Cardinals and the NL Division Series against the Los Angeles Dodgers, Hosmer combined to go 4-for-27 (.148) with one home run and five strikeouts. In Game 2 of the NLDS with the Padres down by one run, Hosmer grounded out to second base with the bases loaded on a pitch outside of the strike zone to end the game.

Joe Kelly threw the knuckle curve on 14 of his 19 pitches, including on all of his offerings to Eric Hosmer. He had good placement on a few of them that were either fouled or taken. In the end, he was able to get Hosmer to chase on 1-2 and induce the groundout. pic.twitter.com/yUI6J5igYp

That final out essentially ended the Padres season, as they would lose by nine runs in Game 3 after they had no starting pitching left. Picking out one at-bat might sound picky, but sometimes the season comes down to one at-bat.

If Hosmer is on the team in 2022 and they make the postseason, I, and hopefully every other Padres fan, will be rooting for him hard and will hope he does well but his time in San Diego simply has not been good enough.

Perhaps because Bianca Andreescu's triumph at the 2019 US Open was so historic in Canadian...
Read more
Sports

Britt Baker recently spoke with Blake Oestriecher of Forbes to promote tonight's AEW Dynamite, where she will face Toni Storm in the semi-finals...
Read more
Sports

Graham McCormack can not reveal what's on the menu for him come June 25 but assures fight fans they are in...
Read more
Load more