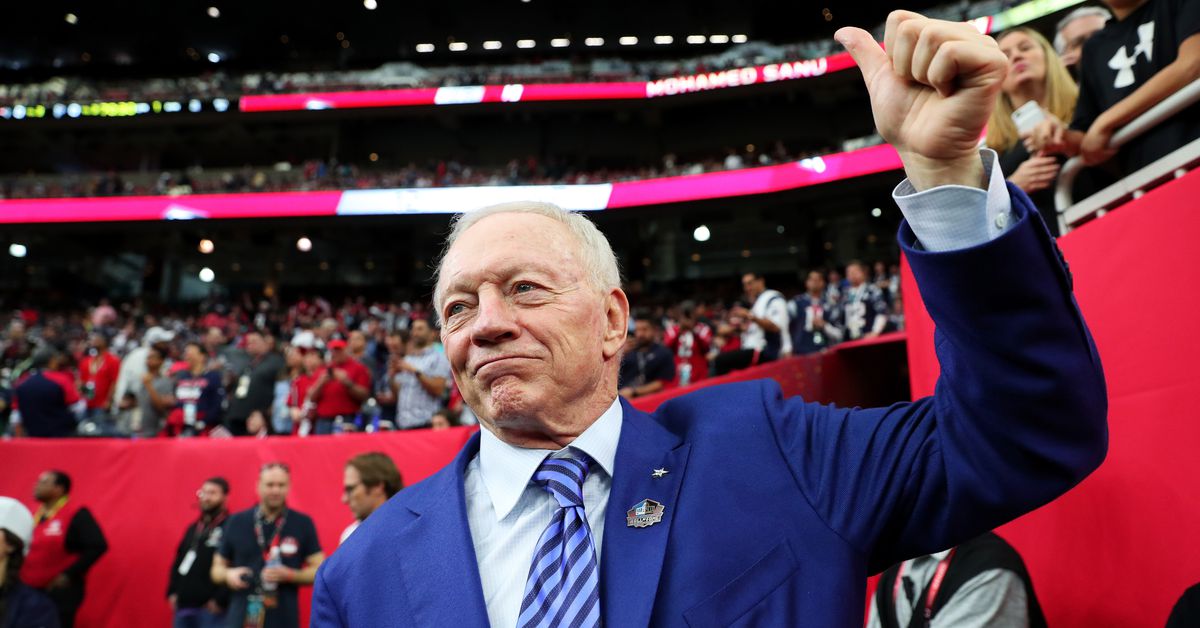 Why the Dallas Cowboys still sit atop the food chain

“To whom much is given, much will be required.” That’s why the Cowboys existing the playoffs in the first round hurt so bad, but when the most accomplished quarterback ever recently retired (Tom Brady, 7 Super Bowl wins, 10 Super Bowl appearances), a chain reaction followed. Not necessarily because of Brady, but because other NFC teams are losing valuable players and hiring new coaches, too.

Aaron Rodgers (the Grinch of Green Bay) is unsure if he’ll return to the Packers, go to the AFC, or retire. Either way, if Rodgers takes his talents to the Denver Broncos or retire, he’ll weaken the power of the Packers like a cell phone on one percent. The San Francisco 49ers are surely moving on from inconsistent quarterback Jimmy Garoppolo.

Arizona Cardinals quarterback Kyler Murray removes Cardinals on all social media platforms sending a chilling message he wants out, and then the Seattle Seahawks aren’t doing anything to protect Russell Wilson and upgrade their roster. Hmmm… do you see where I’m going?

Those aforementioned teams are going to lose quarterbacks and / or dealing with two disgruntled quarterbacks that are giving more signs for a trade than a cheapskate at the flea market. This bodes well for Dallas because two of the “perceived” toughest teams they face next season — Bucs and Packers — will be without their Hall of Fame signal callers.

Meaning Dallas should be the favorites in those games. Even if Wilson and Murray stay, they’re not on Dallas’ schedule and would only meet them in the playoffs if they make it. Wow. Come on… you all know where I’m going with this scenario within the NFC.

Chidobe Awuzie was offering up an assessment.

In light of Chidobe Awuzie’s comments about how a change is scenery impacted him this last season in Cincinnati, is it safe to conclude that this could be one of the top reasons why we have never made a deep run into the playoffs? Are the distractions of being a Dallas Cowboys impeding our players to the point we just can not focus on football enough to be a contending team? – ROBERT WARD / SCRANTON, PA

Seal: Yeah, I agree it’s a huge spotlight that probably requires a little extra focus and toughness – and I think the current team has plenty of guys who can handle that. It’s impossible to say there’s one specific reason why the Cowboys have not won big for this long. Are there distractions? Of course. For the past 15 years I’ve been here, every time the team gets on a little streak, the outside world starts drawing comparisons to the great ’90s teams because everyone’s ready to see that type of run again. The Cowboys also get everybody’s best shot, every week, because they’re America’s Team. That’s a fact. I do think through the frustration of the playoff loss to San Francisco, we’ve lost a little perspective here. That game was widely considered a toss-up, and at least five of the seven teams in the NFC playoffs had a legit shot at the Super Bowl. It’s more about how they lost – the 14 penalties, the slow start, and the offense’s decline in production after the bye – that makes this so hard to stomach.

Troy Aikman Asked How To “Fix” The Dallas Cowboys – Hunter Hodies, The Spun

Maybe Troy Aikman has the answers.

The Cowboys have not won the Super Bowl since 1995 and also have not been to an NFC Championship Game since that same here.

Aikman spoke on the Rich Eisen Show on Friday afternoon and still does not know what’s missing with Dallas.

“I honestly do not know,” Aikman said. “There was a time where I thought I did know. When you take a year like this, and they’re as talented as any team in football, and as someone who gets a chance to see a lot of these teams because of the Thursday night schedule and Sunday package, I put their roster up against anyone. They played great, but when you go into the postseason and you do not play your best football, this is not the first time this has happened. ”

“I do know this: It’s heartbreaking for that organization and for Jerry Jones to have the team that they had and pretty healthy going into the postseason and not to get out of the first round is really defeating and it makes for a long offseason.”

We are about a month away from free agency beginning across the National Football League, and when it does, things are likely going to be stressful for the Dallas Cowboys. There are a number of players on the Cowboys with expiring contracts that fans would like to see them bring back. While there are a lot of players the headliners generally speaking are Randy Gregory, Dalton Schultz, Jayron Kearse, and Michael Gallup.

How Dallas is able to navigate all of these pending contracts will be fascinating, but the most unique of them may be Gallup. The talented wide receiver saw much of his season lost to a calf injury before he returned only to tear his ACL before the season ended.

It is highly possible that another team is willing to devote a large sum of money to Gallup in order to make him a top priority of their offense. Of course, another potential hypothetical is that he returns to the Cowboys on a one-year deal like some players do after injury with hope towards earning a top contract in the 2023 offseason.

Why Micah Parsons Could Be Even Better in Year Two – Cole Patterson, A to Z Dallas

Imagine an even better Micah Parsons …

Dallas Cowboys linebacker Micah Parsons put together one of the greatest rookie seasons ever. The do-it-all defender made an impact all over the field for the Cowboys in his first season on the professional level.

Parsons played primarily linebacker, but defensive coordinator Dan Quinn did not want to limit his abilities. Therefore, the rookie was often rushing the passer and even lining up at EDGE throughout the season.

It was unlike anything we’ve seen in quite some time – maybe ever. Regardless of where Parsons was positioned pre-snap, he found a way to make an impact on the play much more often than not.

As a result, the 2021 first-round draft pick took home multiple honors. Parsons was named the AP Rookie of the Year, given to the best rookie on offense or defense. He was also the unanimous selection for Defensive Rookie of the Year – the first ever player to accomplish that feat.

Additionally, the Penn State phenom finished second in Defensive Player of the Year voting – as a rookie. Pittsburgh Steelers standout pass rusher TJ Watt ran away in the voting, but Parsons did not get more votes than Aaron Donald.

It was truly a special season from a unique player.

We offer a different show every single day on the Blogging The Boys podcast network.

We also offer daily episodes of Dallas Cowboys Roundup where we give you that day’s latest headlines so that you always stay caught up. Consider it an audio version of the links, and every episode is 10 minutes or less so you can catch up in a hurry.

The Blogging The Boys podcast network is available on all major podcast platforms.