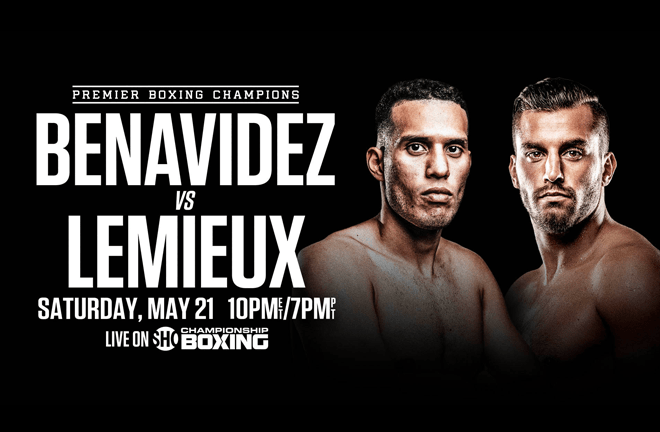 The Gilia River Arena in Glendale, Arizona is the setting this Saturday night, as hometown hero David Benavidez takes steps to regain the WBC super middleweight title that he never lost in the ring, when he takes on fellow big puncher, David Lemieux, for the interim strap.

Benavidez vs Lemieux is scheduled for twelve rounds, and can be seen live on SHOWTIME in the USA.

Benavidez (25-0, KO22) originally won the WBC title back in September 2017 in a split decision win over Ronald Gavril for the vacant belt, where he was dropped in the final round, and he bettered the result in a rematch five months later , winning every round on two cards.

The 25-year-old would then be stripped of the title after failing a drug test for cocaine, but regained the strap in September 2019, knocking out Anthony Dirrell in nine.

The Phoenix native would lose his title again though ahead of his next contest, this time on the scales, before beating Roamer Alexis Angulo via tenth round retirement.

Benavidez has ticked over since, stopping Ronald Ellis in eleven, and then Kyrone Davis in seven last November.

He now meets Lemieux (43-4, KO36), for an interim version of the title currently held by Saul ‘Canelo’ Alvarez.

Quite how much the Canadian has left at 33, and with miles on the clock, is questionable. He is a former IBF world champion, so has to be respected, and won the vacant belt in June 2015, outscoring Hasan N’Dam N’Jikam, but was walloped in eight by Gennady Golovkin when attempting to unify.

Four comeback wins led to a shot at the WBO belt in his homeland, but he was no match for Billy Joe Saunders, who humiliated him in a landslide points defeat.

He has won five in lower grade company since, his last in June last year, a second round stoppage of David Zegarra in Mexico.

Prediction: Benavidez has constantly called out the big names at 168 pounds, and a statement win here will keep him on track for meetings with them. I can not see Lemieux making too much of a dent, and the home favorite can force a stoppage in the later rounds.

Gifted Cuban, Yoelvis Gomez (5-0, 5 KOs), fresh off a one round knockout of Clay Collard, gets a first scheduled ten rounder here, and the super welterweight now gets Jorge Cota (30-5, 27 KOs), who has been in with some good names, including undisputed super welterweight champion, Jermell Charlo.

Prediction: Cota has been stopped four times in his five defeats, and Gomez can add to that tally here.

Victor Ortiz (32-7-3, 25 KOs) is a faded version of himself, and the former WBC welterweight champion, some eleven years ago, has not had a win since 2018, and campaigns at super welterweight here against Todd Manuel ( 20-19-1, KO6). The contest is set for ten.

Prediction: Although a shadow of what he once was, Ortiz should stop Manuel, who has been halted seven times, and was stopped in five last time out.

In the sole eight rounder, Estevan Villalobos (15-1-1, 11 KOs) should be able to take an early win against Christon Edwards (13-3, 6 KOs) at welterweight.

In six round action, 19-year-old Elijah Lorenzo Garcia (10-0, 9 KOs) can extend his portfolio of knockout wins with an early victory in his middleweight affair with Rowdy Legend Montgomery (7-3-1, 5 KOs) , while at super featherweight, Jesus Abel Ibarra (13-0, 6 KOs) could need the distance to take the win against Ernesto Guerrero (33-33, 23 KOs).

At lightweight, Julio Ocampo Hernandez (1-0, 1 KO) can build on his debut success with a stoppage win over Gibran Perez, who makes his first bow.

Ok Rae Yoon will look to solidify himself as a lightweight champion when he faces Christian Lee in a rematch at...
Read more
MLB

If you've been keeping up with the USFL, the 2.0 version of the spring league just wrapped up its season with...
Read more
Load more