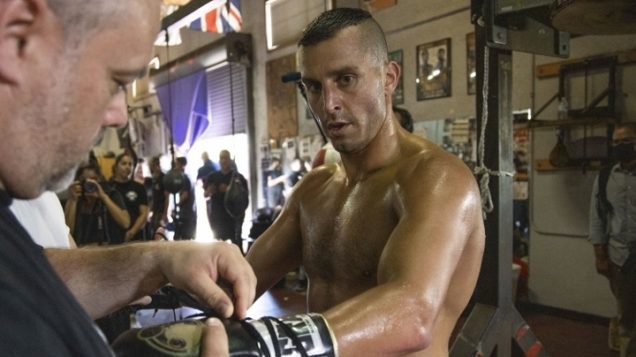 Super-middleweight contender David Lemieux may be approaching his last shot at a world title. The Quebec native will take on David Benavidez on a Showtime televised card in Glendale, Arizona on May 21 for the interim WBC title, with a potential shot at Canelo Alvarez at stake. Canelo was recently upset by light-heavyweight titlist Dmitrii Bivol and he has not yet stated if he will remain at 175 or return to defend his titles at 168. But regardless of Canelo’s decision, the winner of Lemieux-Benavidez will be one step closer to holding a world title.

At 33 years old and with close to 50 fights, Lemieux is in the twilight of his career, and although he took on the best fighters at middleweight, his recent run at super-middleweight has been inauspicious, to say the least. Since moving up in 2019, Lemieux has beaten Max Bursak, Francy Ntetu, and David Zegarra, none of whom are anywhere close to being considered a contender. Lemieux has been handed this opportunity against Benavidez based solely on name value and merit from a lower weight class.

Given Lemieux’s mediocre opposition in his current weight class, Benavidez represents by far his toughest test in several years. But Lemieux stated in a phone interview that he is ready for that jump up in competition: “I am ready for the big step up against Benavidez because the opportunity is here and I am ready to fight the best in the division.”

Although Benavidez has yet to register a signature win, he has earned top contender status by beating the likes of Ronald Gavril, Anthony Dirrell, and Ronald Ellis. However, despite his undefeated record (25-0), Benavidez has had several out-of-the-ring transgressions, which have caused the boxing cognoscenti to question his commitment to the sport and if he will ever measure up to his lofty potential.

In 2018, Benavidez tested positive for cocaine and was subsequently stripped of his WBC title. After serving a measly four-month suspension, he rebounded with knockout wins over J’Leon Love and Dirrell in 2019, the latter to regain his title. But before his next fight against Roamer Alexis Angulo, Benavidez came in overweight so he was once again stripped of the title. Subsequent inside-the-distance wins over Ronald Ellis and Kyrone Davis have earned Benavidez the shot at the interim title.

At the recent virtual press conference, Lemieux downplayed the opinion that this is potentially the last meaningful opportunity in his career, yet he acknowledged the importance of getting the win. “Regardless of your age, it’s really now or never in every fight in the boxing ring,” stated Lemieux. “You do not get many chances to leave a good mark in the game, so every fight needs to be taken very seriously, especially a fight of this magnitude. There’s a lot at stake for me. I know I’m the underdog, but I do not care. I’m just going in there to fight, underdog or not. I’ve been the underdog in the past and I’ve won the fights. It does not really bother me. ”

To beat the younger, bigger, and more versatile Benavidez, Lemieux will need the performance of a lifetime. Throughout his career, Lemieux has proven that if he can force opponents to trade power punches with him, he will likely leave them twitching on the canvas. Just ask Curtis Stevens and Gary O’Sullivan. But as much power as he possesses, he has not shown the equivalent boxing skills to beat upper echelon opposition. Gennady Golovkin dominated Lemieux with the jab on his way to an 8th round stoppage in 2014, while Billy Joe Saunders embarrassed him in a boxing clinic over 12 rounds in 2017. Every time Lemieux has stepped up against elite opposition, he has been soundly defeated.

And Benavidez represents another elite-level opponent. Based on Lemieux’s track record, his best chance at victory is to land one of his missile-like left hooks because winning a decision in Benavidez’s hometown is highly unlikely. Lemieux has the proverbial puncher’s chance, and the question is whether he can stay inside and force Benavidez to trade leather. Fortunately for Lemieux, Benavidez has never been one to shy away from a scrap. Despite his tall and rangy frame, Benavidez prefers to mix it up on the inside where he can land his damaging hooks and uppercuts, and assail his opponent’s midsection.

That is exactly the type of firefight that Lemieux is looking forward to. “Benavidez is a guy who comes to fight, which is very good for me because I like guys who I do not have to chase,” explained Lemieux.

But the Quebec resident is also prepared to hunt Benavidez down should he decide to take a more measured approach. “We’ve been practicing for everything to not leave any surprises. We’ve been training and sparring with guys who move, guys who come at me, and we’re well-rounded for 12 rounds and whatever the fight might ask for. ”

Lemieux appears to have the right mentality heading into his biggest fight in recent years. Now it’s about getting in the ring and showing it. Given that the super-middleweight division is very shallow, a loss for Lemieux against Benavidez does not automatically signal the end of his run as a viable contender. But this is a tremendous opportunity for him to take a giant step toward regaining a world title and earning himself a fight against Canelo, which he has coveted for years.

The time is now for Lemieux. Let’s see if he can make it count.

Years ago when I was training to become a GolfPsych Certified Instructor they introduced a brand new tool called a tension meter. ...
Read more
Load more