Duran vs. Cuevas. A Battle Of Boxing Legends 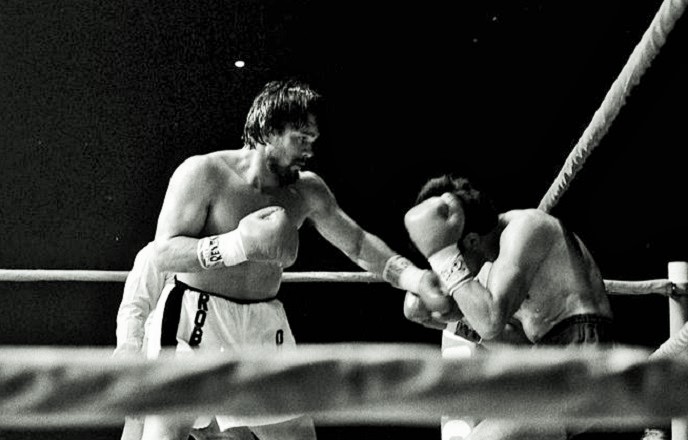 Roberto Duran vs. Pipino Cuevas. Just two or three years earlier, an absolute dream match, but now a meeting of ex-champions, if not has-beens; two once proud warriors, both legendary, both now seemingly on their way to retirement. Had they clashed in 1979, they could have sold-out virtually any stage in Latin America or the US At that time they were among the most feared fighters in all of boxing, icons revered in their respective home nations of Panama and Mexico.

Pipino Cuevas had inspired awe during his reign as the WBA welterweight champion of the world, breaking jaws and ribs as he knocked out a long list of contenders and former champions, including Angel Espada, Randy Shields, Harold Weston and Pete Ranzany. But he had since been humbled by Thomas Hearns and in 1981 fight fans were shocked when unknown Roger Stafford trounced him and won a unanimous decision.

For his part, Roberto Duran had been wandering through the wilderness since the disgrace of his defeat to Sugar Ray Leonard in November of 1980. Having quit against his nemesis in New Orleans, Duran was barely welcome in his home country of Panama, and he had since suffered losses to both Wilfred Benitez and, in a shocking upset, fringe contender Kirkland Laing. Needless to say, the stock and marketability of both Pipino and Roberto had plummeted, a fact evidenced by their modest purses of fifty grand plus a cut of the gate. Two or three years before, a Duran vs Cuevas showdown would have meant million dollar paydays.

Much was at stake that night in Los Angeles. A win for either meant renewed credibility and a future chance at a world title, while a loss meant disaster. But this duel was as much about national pride and Latin machismo as it was about future opportunities. Cuevas had been publicly questioning Duran’s macho credentials for some time, sneering at the Panamanian for his pathetic showing in the Leonard rematch, his manager even writing a challenge to “Manos de Piedra” that was published in Ring magazine. The promise of some serious action in a grudge match between two faded but legit power-punchers made the turnstiles sing and a raucous crowd of more than seventeen thousand Hispanic fight fans flooded the LA Sports Arena. Both former champions heard the cheers as they entered the ring. 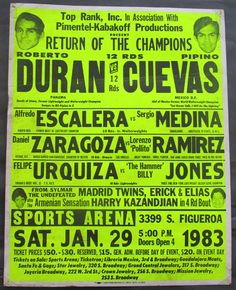 From the start this was a take-no-prisoners, macho showdown, both warriors starting fast and with bad intentions. Cuevas stalked behind his vaunted left hook, landing it to both head and body; while Duran was never hurt and got home a couple of sharp right hands, Cuevas won the first round. In the second Roberto began to establish his jab and find his timing while making it clear to all that Pipino’s power did not phase him. The supposedly washed-up Duran had taken Pipino’s best shots and instead of wilting or backing off, he was coming forward and firing back. At the end of the round he got home a series of vicious body punches.

In the third, the Panamanian assumed complete control as a thrilling, toe-to-toe exchange saw Duran rattle his foe with a left hook. Cuevas recovered but then a right uppercut buckled his knees. To the surprise of many, a supposedly over-the-hill former lightweight was, against a natural welterweight, both more resilient and more powerful.

And like the Duran of old, Roberto did not permit a wounded quarry to escape. In round four he came forward fearlessly, putting his punches together like the Manos de Piedra his fans remembered, and a thudding right to the jaw turned the legs of Cuevas into rubber. Roberto’s follow-up attack drove Pipino into a corner, only the turnbuckle preventing him from hitting the canvas. The referee credited Duran with a knockdown and gave the Mexican the eight count before signaling for the action to resume. The moment he did Roberto pounced, unleashing a series of combinations that left Cuevas on the floor again. Pipino bravely struggled to his feet only to see his manager, Lupe Sanchez, step through the ropes and signal surrender.

“My husband was hurt and I did not want him to take further punishment,” Sanchez said afterwards.

For the 31-year-old Duran, who scored his 56th knockout in 75 wins, this was an especially sweet victory. While all knew Cuevas was a shadow of his former fearsome self, he was still a highly respected macho warrior. A knockout over such a rival meant a large measure of vindication for a fighter struggling to restore his good name. More importantly, the win meant a title shot in the near future. Suddenly Roberto Duran had to be taken seriously again.

“I dedicate this fight to the people of Miami,” said the Panamanian. “They did not lose faith in me while others did.”

Indeed, almost everyone had dismissed Roberto after his shocking defeat to Laing the year before, but now he was to battle for young Davey Moore’s junior middleweight world title. It would prove to be an opportunity Duran took full advantage of.

But that memorable triumph could not have happened without the victory over Cuevas and its importance cannot be overstated. It was the turning point for Roberto, the match that rescued his reputation and made possible all of the big fights and great performances that came after, the victory that allowed Duran to add to his legend and keep fighting for years to come. – Robert Portis

ShareTweetSuper-middleweight contender David Lemieux may be approaching his last shot at a world title. The Quebec native will take on David Benavidez...
Read more
Load more