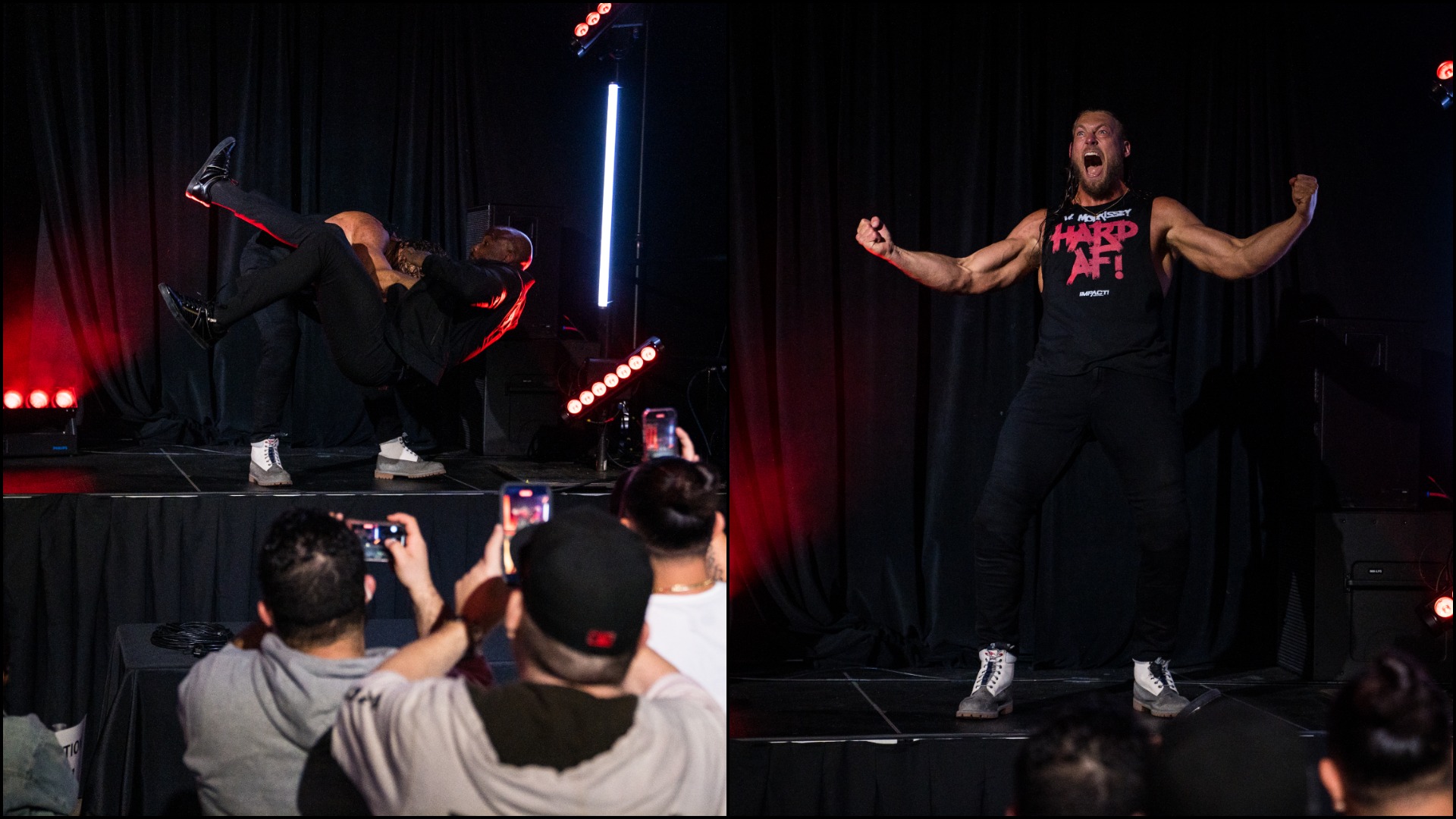 Stream this episode of IMPACT! on-demand

Big Kon battles former IMPACT World Champion Eddie Edwards in just his second match in IMPACT Wrestling! Kon uses his incredible strength to his advantage in the early going. Edwards quickens the pace with a shot of adrenaline to the outside. Kon regains control with a thunderous clothesline on the floor. Kon hits an overhead belly-to-belly suplex for two. Edwards delivers a series of chops in the corner, followed by the Blue Thunder Bomb but Kon kicks out at one. Edwards hits the back-to-back Boston Knee Parties to score the victory!

The final IMPACT! before this Saturday’s No Surrender mega event is on the air.

Gia Miller interviews the Bullet Club ahead of their huge six-man tag team match against Violent By Design tonight. Jay White vows to give them a preview of what’s to come at No Surrender when he battles Eric Young one-on-one and GOD challenges The Good Brothers for the IMPACT World Tag Team Titles.

The dominant Masha Slamovich puts both of her hands behind her back, inviting Kiah Dream to give her a free shot. Slamovich quickly gains control with the Burning Hammer. Moments later, Slamovich remains undefeated after hitting the Russian Death Device!

The winner of this match will join Chris Bey, Mike Bailey and Jake Something in a four-way match at No Surrender to determine the # 1 contender for the X-Division Championship, currently held by Trey Miguel! The action is fast and furious from the opening bell. Christian dives to the outside but Fulton sacrifices himself to save Austin. Laredo soars off the top, taking out Fulton with a crossbody. Austin hits Laredo with a springboard kick for two. Laredo hits a springboard of his own as he connects with a Moonsault on Austin. Christian hits jaw-dropping handspring offense to ground Laredo. Christian flies over the top, then hits a double reverse DDT to both of his opponents on the floor.

Christian connects with his signature stomp but gets caught with The Fold from Austin for three!

Decay sends a message to JONAH ahead of his match with Black Taurus at No Surrender. Rosemary vows to show him what coming face-to-face with a monster is really like!

Knockouts World Tag Team Champions The IInspiration continue their attempts at getting Kaleb With a K to leave The Influence and join them!

Gisele Shaw makes her IMPACT in-ring debut after stealing the spotlight from Lady Frost following her victory over Alisha last week on BTI!

Frost hits an acrobatic running cannonball in the corner for an early two count. Shaw turns the tide after a draping DDT from the second rope. Both Knockouts exchange strikes with Shaw getting the upper-hand following a knee to the back. Frost hits the Temperature Drop but Shaw somehow kicks out at two. Shaw comes back with a top rope Spanish Fly. Shaw capitalizes with a springboard corkscrew to win in her IMPACT debut!

Kenny King declares victory over Chris Sabin tonight as Honor No More and Team IMPACT prepare to go to war this Saturday at No Surrender.

In an interview with Gia Miller, the “Champ Champ” Deonna Purrazzo reveals that her open challenge for either the AAA Reina de Reinas or ROH Women’s World Title will continue this Saturday at No Surrender!

Ian Riccaboni joins Tom Hannifan and Matthew Rehwoldt on commentary as King and Sabin set the stage for what’s to come at No Surrender! Conspicuous by his absence is the final member of Team IMPACT, Steve Maclin. Honor No More distracts Sabin from ringside, allowing King to gain control. King hits a big powerslam for two. Both men are down following a pair of clotheslines, giving Sabin the opportunity he needs to regain himself. Sabin hits a tornado DDT out of the corner for two. King counters the Cradle Shock into a spinebuster. King hits a butterfly Tiger Driver but Sabin is able to get his shoulder up. Sabin traps King in a pinning predicament to score the victory!

After the match, Maria Kanellis gets on the mic and says that unlike Team IMPACT, Honor No More can trust each other. Maria suggests that Steve Maclin was the one responsible for taking out ROH World Champion Jonathan Gresham, who he replaced as a member of Team IMPACT.

Backstage, Steve Maclin tells Team IMPACT that Maria Kanellis is trying to stir the pot and give Honor No More the advantage at No Surrender. Chris Sabin, Rich Swann, Eddie Edwards and Rhino reluctantly accept Maclin’s explanation and agree to get on the same page.

Before Mickie James defends the Knockouts World Title against Tasha Steelz at No Surrender, she joins forces with Chelsea Green after Steelz and Savannah Evans brought their friendly matchup to an abrupt halt last week! It takes the combined strength of James and Green to take Evans off her feet with a double flapjack.

James sends Steelz for a ride with a head scissors out of the corner, followed by a neckbreaker. Evans pushes Green off the top rope, allowing Steelz to gain control. Steelz confronts James on the apron, giving Green an opening to hit her with a back body drop. Green goes for the tag but Steelz knocks James off the apron. Greens slips out of a powerbomb attempt from Evans and she finally makes the tag to James. The pace quickens as James hits Steelz with the Mick Kick but Evans breaks the pin. James hits the Mick DT on Evans but Steelz capitalizes with the Black Out to pin the Knockouts World Champion!

Brian Myers presents “How to be a Professional: The Final Chapter”. Myers is furious with VSK and Zicky Dice over their shortcomings in recent weeks, including Myers’ loss to W. Morrissey in a No Disqualification match. Myers has had enough and cuts the final two members of The Learning Tree.

The stars of IMPACT will show No SurrenderLIVE this Saturday from the Alario Center in New Orleans streaming on IMPACT Plus and YouTube for IMPACT Ultimate Insiders! Tickets are on-sale now at Eventbrite.com. Deonna Purrazzo issues an open challenge for either the AAA Reina de Reinas Title or the ROH Women’s World Title. JONAH goes one-on-one with Black Taurus. Jordynne Grace gets her rematch for the Digital Media Title against Matt Cardona. Chris Bey, Ace Austin, Jake Something and Mike Bailey collide in a four-way match to determine the # 1 contender for the X-Division Championship. Jay White battles Eric Young in a battle of Bullet Club vs Violent By Design. The Good Brothers defend the IMPACT World Tag Team Titles against GOD for the first-time-ever. Tasha Steelz challenges Mickie James for the Knockouts World Title. Team IMPACT goes to war with Honor No More in a match where if Honor No More loses, they must leave IMPACT Wrestling for good. Plus, Moose defends the IMPACT World Title against W. Morrissey and more!

It’s main event time on IMPACT! as two of the most dominant factions in professional wrestling today collide! Bullet Club holds the ring in the opening moments as VBD regains their composure on the outside. Violent By Design isolates Tama Tonga on the floor to gain control. Tama attempts to tag out but Doering clotheslines his partners off the apron. Doering hits a huge running crossbody on Tama for two. Tama makes a desperate tag to Tanga Loa who faces off with Doering in the middle of the ring.

Both men are down following a series of running strikes. White cuts off Young with a mid-air chop, then hits a Curtain Call for two. The match begins to break down as everyone gets involved. GOD takes out Doering with a Magic Killer. Young almost puts White away following a top rope elbow drop. GOD hits the Killshot on Deaner, followed by a Two-Post Massacre. White crawls to the pin to score the victory for his team!

After the match, reigning IMPACT World Tag Team Champions The Good Brothers appear at the top of the ramp and stare down the Bullet Club as they prepare to defend their titles against GOD in the highly-anticipated first-time-ever showdown this Saturday at No Surrender!

IMPACT! goes off the air.