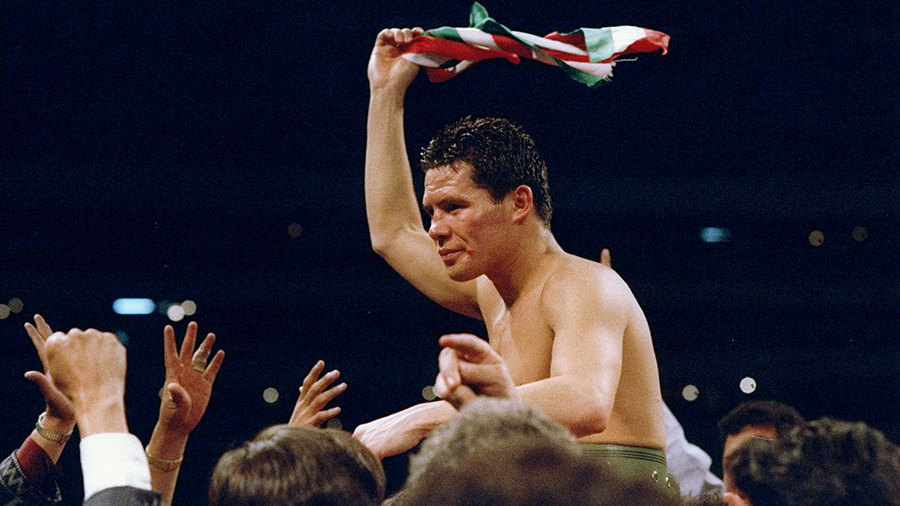 When Joe Cortez stopped the fight, even Haugen must have felt like things were in their right place. He took on the role of villain with Chavez, years before the match even, and for the two fighters and the record-setting crowd in Mexico City, there was somehow more on the line than just the WBC super lightweight title. If Haugen had beaten Chavez it would have only put more poison in the veins. The bad guy just has to get it in the end, not only for us, but for him too. To humble him and give him a chance at redemption.

Greg Haugen got his start in Nevada, fighting in bars, “Tough Man” competitions. He’d take on guys sometimes 70 pounds heavier, knock them all down. In the bar, the attitude played well. The women liked it and it psyched out those big sonsofbitches. They could not figure out why the little guy was talking so much, why he was not scared. But pro boxing is a whole different world, and the men you meet aren’t always as forgiving as the Nevada brawlers who crack each other’s skulls and then have a drink together afterwards.

In Las Vegas, around 1990, Haugen watches a proud Mexican fighter training for an upcoming bout. Haugen tells the fighter the guys he’s sparring with are nothing but “young little girls with dresses on.” Says he’d spar with him for free, help him out, teach him something. The fighter he’s talking to is Julio Cesar Chavez, otherwise known as “The Lion of Culiacán,” “Mr. KO. ” He’s undefeated, a world champion, and Haugen’s brash words do not sit very well. When asked about Haugen later, Chavez remembered: “I hated him from that moment.”

A few years pass and Haugen is the WBC’s # 2 contender, locked in to fight Chavez for the belt. When asked if he’s intimidated by the champion’s perfect 82-0 record, Haugen gives a cocky smile. “The way I see it,” he says, “sixty of the guys he fought were just Tijuana cab drivers that my mother could have knocked out… I’m not taking him light but I’m not taking him as unbeatable either…” Does Haugen have any misgivings about the fight taking place in Mexico City in front of 130,000 of Chavez’s countrymen? “There ain’t 130,000 Mexicans that can afford to buy tickets,” cracks Haugen.

Now Chavez loves his country. In ’87, the Puerto Rican champ Edwin Rosario made some disparaging comments about the Mexican people, and even stated he would send Chavez back there in a coffin. Chavez put a merciless beating on Rosario that ended with a TKO in round 11 and Rosario was never quite the same ever after. When he hears Haugen’s comments, Chavez once again has the fire burning. “I really hate him bad,” he says. “When he looks at me, I want to vomit. I am going to give him the worst beating of his life. I am going to make him swallow the words that came out of his dirty mouth. ”

February 20, 1993. Azteca Stadium, Mexico City. Attendance is estimated at 136,000, making it the largest crowd for a fight ever, anywhere. The stadium pulses, bodies moving together in waves. Thousands of police circulate with uzis, vicious dogs. In the center of the stadium, around the ring, a wide moat is fenced with barbed wire.

Haugen enters to Springsteen’s “Born in the USA” and carrying the American flag. Ripples in the stadium, the crowd seething. Referee Cortez brings the fighters to the center of the ring. Chavez refuses to touch gloves and the multitude roars in approval.

The bell rings, Chavez’s engine starts to whir. He lets Haugen get a couple jabs off before smashing the American with a straight right, then clack clack, two more rifle-shot rights and Haugen is down, just 25 seconds in. The crowd booming, “Mexico! Mexico! Julio! Julio! ” Haugen takes some more from Chavez before the round ends and goes back to his corner with blood streaming from his nose.

The next two rounds, Chavez works on Haugen’s body. Slamming him in the gut, even some low shots for good measure. This is a schoolyard; this is a lesson. The ref does not see, or does not say. The fourth is much of the same. Haugen can not compete with the power of Chavez. He tries to keep the champion at a distance, but when he does he is forced to eat a steady diet of straight right hands.

Fifth round, big round. That straight right again and Haugen is on the ropes. Does he know it’s coming? In some strange way, does he want it to come? 130,000 people around him, calling for his blood. Would it not feel sickly satisfying to give it to them? Julio is playing with him, walking him around the ring, staying at the perfect distance to keep landing the right. Haugen is dazed, fading. Julio moves in with a combo that works both the body and head and Haugen goes down again.

He gets up, but he is not throwing punches anymore. Chavez just dishing out the punishment, speaking to him with his fists, making him answer for the shit he’d said. Joe Cortez finally steps in, stops it, and the crowd erupts. It’s beautiful, it’s storybook. Chavez, “El Gran Campeon de Mexico,” successfully defends both himself and his country against the boorish American. It could not have gone any other way, it’s the only ending…

And of the Tijuana cab drivers Haugen talked about? After, Haugen relented: “They must have been tough taxi drivers.” – David Como