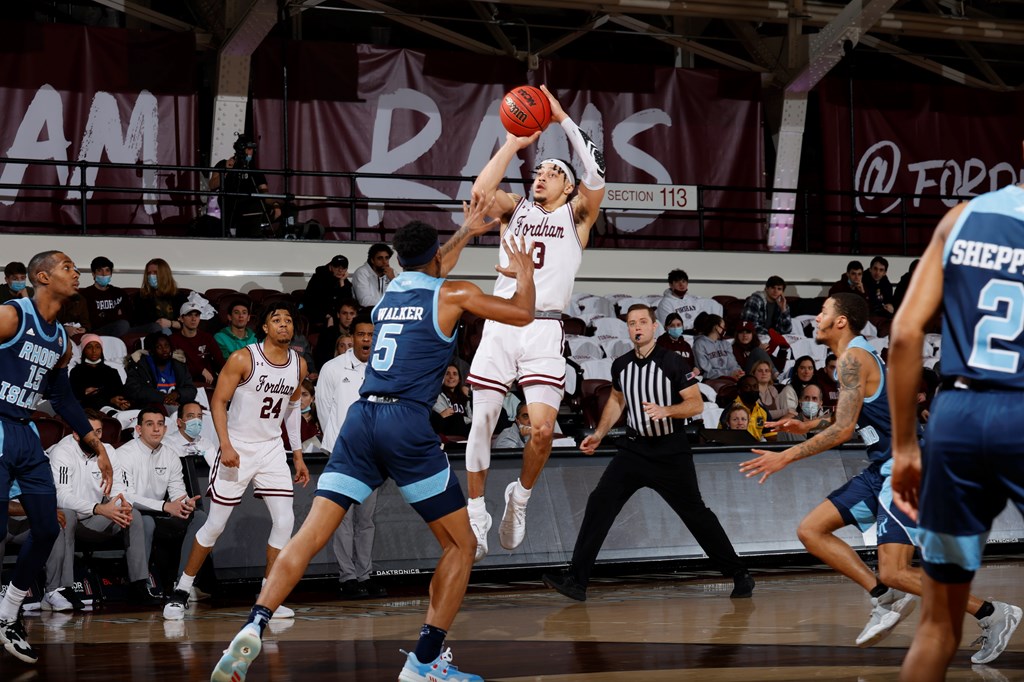 As the fans trickled into the Rose Hill Gym for the first time in over a month, it was clear that their was a unique buzz in the air. This buzz quickly turned into an uproar, as Fordham got off to a very quick, very strong start over Rhode Island. Up 16-8 after the first ten minutes, it was clear that the crowd breathed some new energy into this Fordham team. According to Coach Kyle Neptune, a refilled student section was key to Fordham’s Wednesday night win.

“You can definitely feel the difference,” Neptune said. “Having your friends behind you really helps.”

Along with the support from their friends, what really helped Fordham against Rhody was Abdou Tsimbila’s presence in the starting lineup. Just the third time this season in which Tsimbila started with Ohams, the 6-9 sophomore gave the Rams an extra boost of size against a large Rhode Island team. With Tsimbila putting on a solid rebounding performance right from tip-off, Ohams was able to settle into more of a stretch-4 role. Both teams got off to a slow start offensively as they focused mainly on intense, physical defense. Three-point shooting was pretty sparse for both teams in the first half, as Fordham and URI shot a combined 35% from three in that period.

“Abdou is a physical freak. He protects the rim, he can rebound. He honestly hurts our guys in practice sometimes, ”Neptune said. “ We just made the change to match up with [URI], we stuck with it, and Abdou got it done protecting the rim and rebounding. ”

Tsimbila would finish the game against Rhody with 4 blocks.

Despite the low scoring affair, this type of game is exactly the type in which Fordham has thrived this season, and this most recent affair was no different. When Ohams and Tsimbila were not on the court, Pat Kelly and Rostyslav Novitskyi served as a solid second unit, with Kelly actually being the one to hit the first three pointer of the game.

“We’ve gone through kind of a transformation over these last two, three weeks, so we’ve really been looking to find ourselves,” Neptune said, alluding to the games Fordham has played since Antonio Daye’s departure, as well as Chuba Ohams ‘knee issues. “I think we found ourselves in that game. We got a lot of contributions from a lot of different guys, so hopefully we can keep it going. ”

Pat Kelly would finish the game with 6 points, while Novitskyi would contribute 2 blocks to Fordham’s team total of 8, the second most in a game this season.

Heading into halftime, it was clear that Fordham’s physicality had stunned Rhody. With a 36-19 lead, as well as a 26-17 rebounding advantage, Fordham had put on their best first half performance since starting conference play. At the break, Chuba Ohams already had a double-double with 10 points and 10 rebounds. In total, Ohams would finish with 14 and 13.

As the second half opened, Fordham still brought plenty of the energy we saw in the first, but were stifled by major defensive changes from Rhody. Switching to a 3-2 zone, Fordham had a lot of trouble making anything happen on the perimeter, and driving to the basket often resulted in a block from one of the Mitchell Brothers. Offensively, Rhody closed the gap with almost impossible looking shots. Sebastian Thomas, who entered the game with just three total three pointers made this season, was 3-4 from deep against Fordham.

After being down by as much as 16 points early in the second, Rhody embarked on a 20-2 run, capped off by Jalen Carry Jumper that would tie the game at 48 apiece. Despite giving up the big lead, Fordham was able to hunker down and prevent Rhody from taking control of the game. By forcing three turnovers, and getting some clutch buckets from Darius Quisenberry, Fordham was able to fight back the rally and claw their way to a 61-55 win.

According to Coach Neptune, wins like this one are exactly the ones he expects from this team. Going forward, Neptune hopes that his Fordham team can keep winning games by forcing physicality out of their opponents.

“I think that’s our guys DNA. They play hard, ”Coach Neptune said. “We have guys that take pride in playing harder than the other team. We talk about it all the time. ”

With this win, Fordham snaps a five game losing streak and improves to 3-5 in conference play. This is Fordham’s first win over URI since a 66-63 OT win in February of 2019. For their next game, Fordham will head to Philly to take on St. Joe’s.