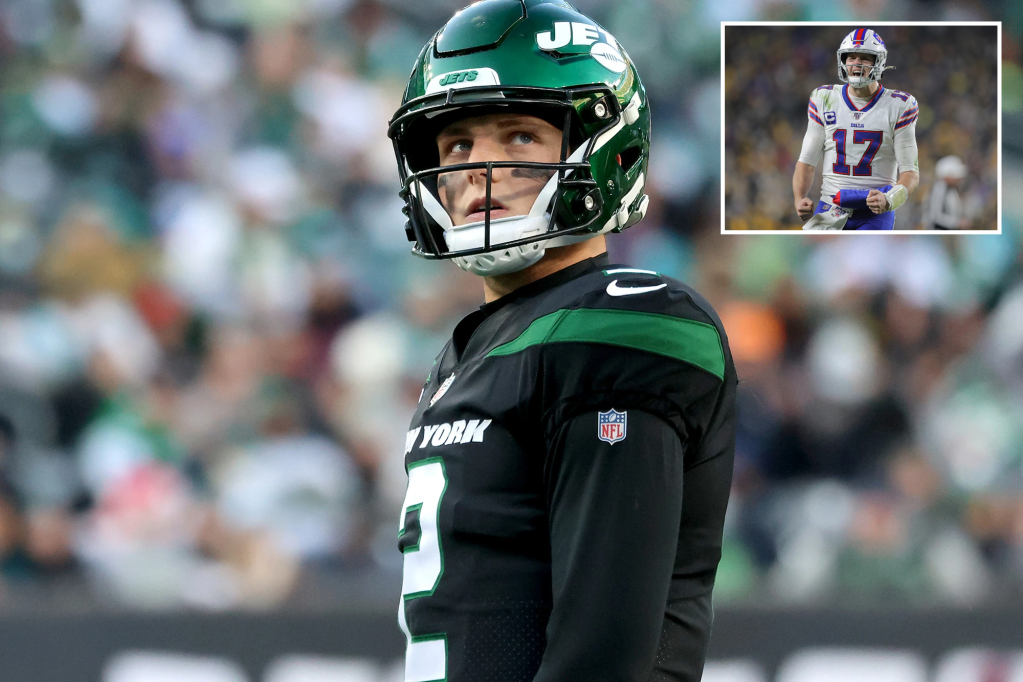 It has felt like the Jets are standing at the bottom of Mount Everest for a while now. After six losing seasons and 11 straight years without a postseason game, the Jets have been trying to scale back up the NFL mountain for much longer than anyone currently on the roster has been around.

But now it feels like they are looking up at Everest and Josh Allen is standing up there throwing snow boulders down in the Jets’ faces.

Most NFL fans were thrilled with Sunday’s Bills-Chiefs AFC divisional playoff game. It was one of the most entertaining games ever played. But you have to think some people in Florham Park wanted to vomit watching that game.

Allen’s ascent to superstardom has been happening for a few years now. But on Sunday night, he confirmed he is right there with the top quarterbacks in the NFL, and the Jets now have to think about the prospect of dealing with him twice a year for the next 15 years.

The Jets spent most of the last two decades playing catch up to Tom Brady and the Patriots. Now, they will have to chase Allen and the Bills.

“It’s about closing this gap in the division and getting to a place where we are competitive every single game,” coach Robert Saleh said after the Jets’ final game of the 2021 season, a loss to those Bills.

This offseason is another one when hope will be abundant for the Jets and their fans. There is reason to hope that quarterback Zach Wilson will make a jump in his second year. The team has some money to spend in free agency and nine draft picks – two in the top 10 and four in the first two rounds. General manager Joe Douglas should be able to make this roster better quickly.

The Jets now find themselves the fourth team in a four-team AFC East. The Bills and Allen look like perennial Super Bowl contenders. Bill Belichick brought the Patriots back to the playoffs after one year away and appears to have found a quarterback in Mac Jones. The Dolphins are going through a transition with a coaching change but they have a strong core on defense and are still rumored to be in the running for Deshaun Watson.

Closing that gap Saleh spoke about is a daunting challenge for Jets leadership.

The current group of Saleh and Douglas are paying for their predecessors’ mistakes, of course. For years the AFC East was the Patriots and the three also-rans. About 10 years ago, the other three teams began dreaming of a day when Brady would no longer be playing. It was a race to be ready when the Patriots dynasty crumbled, for one team to fill that void. The Bills won that race and the Jets finished in the back of the pack.

The mistakes are too long to list and you already know them anyway. The Jets’ drafting record is abysmal. If pending free agents Marcus Maye, Nathan Shepherd and Folorunso Fatukasi are not re-signed this offseason, the Jets will have no one on the 2022 roster from prior to the 2019 draft.

It is usually simplistic to look at teams’ drafts and play the what-if game with the other possibilities they could have drafted. But drafting Sam Darnold over Allen in 2018 is one that is inexcusable and looks like it will haunt the Jets for years. The Jets knew they were drafting a quarterback in 2018 dating back to the year before. They stripped down the roster and basically punted the 2017 season, knowing they wanted to be in position to draft one of the young quarterbacks.

They chose Darnold at No. 3 and the Bills traded up to get Allen. Sure, most of the experts that day had Darnold rated higher. But this is why Mike Maccagnan was paid millions – to get decisions like this right. He blew it and the Jets are paying for it now.

That leaves Douglas and Saleh at the bottom of Everest, staring up at that mountain and dodging the snow boulders from Allen.

It’s going to be a long climb.