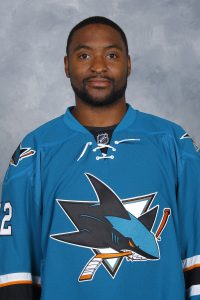 Former San Jose Sharks forward Joel Ward says he has not officially retired from the NHL, despite media reports.

In fact, Ward, 38, says he’s still open to joining an NHL team, whether it’s a young club that might need a veteran’s presence or a playoff-bound squad in search of a proven Stanley Cup Playoffs performer.

“No, I have not officially retired,” Ward told me in an email Monday night. “I’m always open to catch on to a team… internet I tell ya lol they hear one thing and they run with it!”

Media outlets like the NHL Network, CBS Sports and scores of hockey websites reported that Ward had hung up his skates based on comments he made at the University or Prince Edward Island’s Men’s Hockey Alumni Day. Ward played for the Canadian college team from 2001-02 to 2004-05.

Joel Ward said he considers himself retired from professional hockey while in Charlottetown for UPEI Men’s Hockey Alumni Day.

A tweet from Complete Hockey News, based on Ward’s comments at the alumni day event, said “Joel Ward considers himself officially retired from professional hockey.”

A CBC story on Ward’s UPEI visit says he is “wrapping his head around retirement.” The tweet and reports were enough to launch a flood of salutes and congratulations to Ward for hanging up his skates.

From getting passed over in the draft to 700+ NHL games. An outstanding career. Congrats, Joel. 🙏 https://t.co/hARDibm0TJ

Can the Caps convince Joel Ward to come out of retirement? That man was clutch in the playoffs. Thanks for the memories, Joe and best of luck in your future endeavors! @ JRandalWard42

Joel Ward has retired from professional hockey. Thanks for being so much fun to watch, Wardo. pic.twitter.com/SHgn9cVxkU

Ward has not played in the NHL or any other pro league since he appeared in 52 games for the San Jose Sharks last season. He had a tryout with the Montreal Canadiens, but did not make the team.

I met Ward at the 2018 Hockey Hall of Fame induction ceremony in Toronto in November and he said he was working out on and off the ice with the expectation of playing this season.

Ward has played 11 NHL seasons with the Sharks, Washington Capitals, Minnesota Game and Nashville Predators. He notched 133 goals and 171 assists in 726 regular season games and 22 goals and 30 assists in 83 playoff contests.