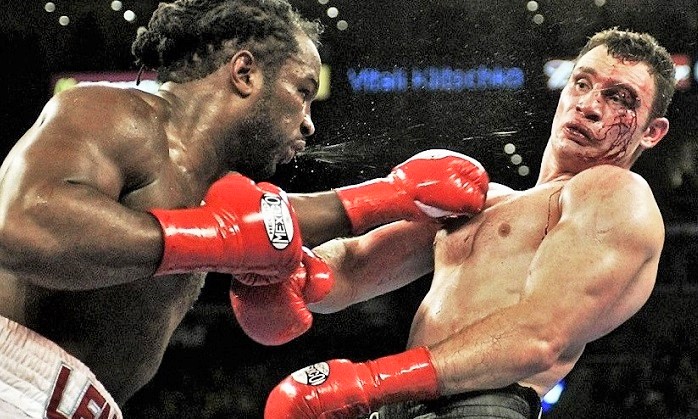 “He entered the strains of ‘Hotel California,'” mused HBO’s Jim Lampley. “So will it be heaven, or will it be hell?” Lampley was no doubt one of the few seriously entertaining “Dr. Ironfist’s chances of becoming a heavyweight champion when Vitali, the older of the two fighting Ukrainian PhDs, entered the Staples Center in Los Angeles for the one and only Lewis vs Klitschko clash. For everyone else, the hulking Ukrainian challenger was but a question mark standing in the way of a possible second battle between Lewis and Mike Tyson.

After all, it was the younger brother, Wladimir, not Vitali, who had been viewed as the true threat to take the gold belt around the waist of Lennox. After all, it was “Dr Steelhammer” who had won a gold medal at the Olympics and got off to a much faster start with his pro career, and with his more conventional style, most thought Wlad possessed the greater talent and natural ability. But after he was upset by journeyman Ross Purity in 1998, it was Vitali who took center-stage, winning the WBO heavyweight title six months later with a two round blowout of Herbie Hide.

But Vitali’s luck, not to mention the public’s perception of him, underwent a drastic change less than a year later when late replacement, and much smaller heavyweight, Chris Byrd, took everything “Dr. Ironfist ”had to offer, kept pressing forward, and ultimately won the war of attrition when Klitschko suffered a torn rotator cuff and quit after round nine. “It hurts too much,” Vitali said to his cornermen as he surrendered on his stool, despite having an insurmountable lead on the scorecards going into the last three rounds. Before this, Klitschko had knocked out every man he had faced and was regarded as one of the most dangerous contenders in the division, but ever since he was dogged by the “quitter” label.

Six months later, it was Wladimir who became the star of the Klitschko family again, picking up the slack Vitali left with a one-sided shellacking of Byrd to avenge his brother and take the belt for himself. After five dominant defenses, it was the younger brother who was again the obvious next opponent for Lennox Lewisso much so that the 2001 Hollywood heist film Ocean’s Eleven included a scene of the two squaring off in a Las Vegas ring before the power went out during the fictional robbery. Not long after, this Hollywood prophecy came true, at least metaphorically. Journeying to Hannover, Germany as a twenty-to-one favorite to defeat Corrie Sandersthe South African challenger pulled the plug on the Wladimir express when he blasted out the Ukrainian champion inside of two rounds.

With Wladimir out of contention, the focus again shifted to the older Klitschko, who was tentatively scheduled to face Lewis in December of 2003 if the champion were to defeat Kirk Johnson in the Staples Center. But Johnson suffered a torn chest muscle in training two weeks before the match, leaving Vitali, who was scheduled to compete on the undercard, as the most viable replacement.

Despite being a former WBO heavyweight champion with a record of 32-1, Vitali was deemed a five-to-one underdog to dethrone a champion who had cemented his generational supremacy the year before with a stoppage win over Mike Tyson. With a possible “Iron Mike” rematch looming in the background, the champion certainly did not enter the Staples Center that night anticipating Lewis vs Klitschko would be his final ring appearance. “Dr. Ironfist ”was just another bump-in-the-road en route to a more lucrative, mega-fight sequel. Or so it seemed at the time. In retrospect, maybe Lewis was guilty of underestimating Vitali, while simultaneously looking past him. 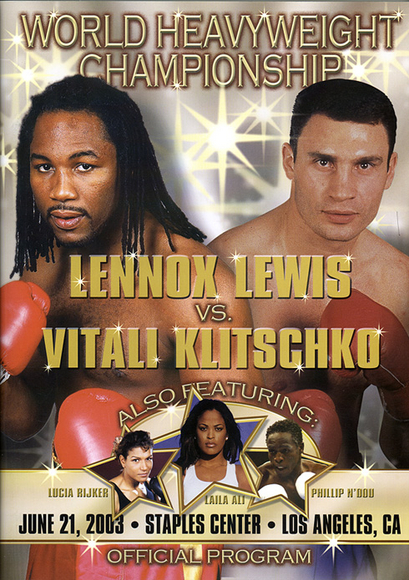 As early as round one the bump-in-the-road upended expectations as Klitschko used some George Foreman-esque “old cattle tactics” to maneuver Lennox into the path of his dangerous right hand. And as Klitschko gained confidence against a champion who just did not look as sharp and focused as he had against Tyson, Vitali unleashed the first consequential shot in round two, hurting Lewis with a straight right and forcing the champion to hold. Despite tasting the challenger’s power, Lennox chose to trek forward, walking down Vitali behind his formidable left jab. An intense heavyweight battle was breaking out and while Lewis had been criticized in the past for his sometimes reserved fighting style, HBO’s Larry Merchant proclaimed that the action which was unfolding was “Gatti-Ward at the highest level of the scale. ” 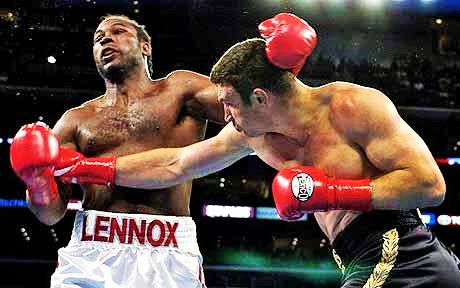 Before round three veteran trainer Emanuel Steward directed Lewis to take the fight to Klitschko and the champion did just that, landing a thudding right hand that opened a fight-altering gash over Vitali’s left eye. The injury appeared to get worse with each passing second and yet Klitschko fought bravely and still appeared to be out-landing the champion. But at the same time Lewis was emboldened by the cut and came forward to unload more big right hands, which were increasingly wreaking havoc on Klitschko’s horrific injury. Already it was clear that Vitali’s bid for the title was under a serious time constraint as the match was in danger of being halted at any moment. 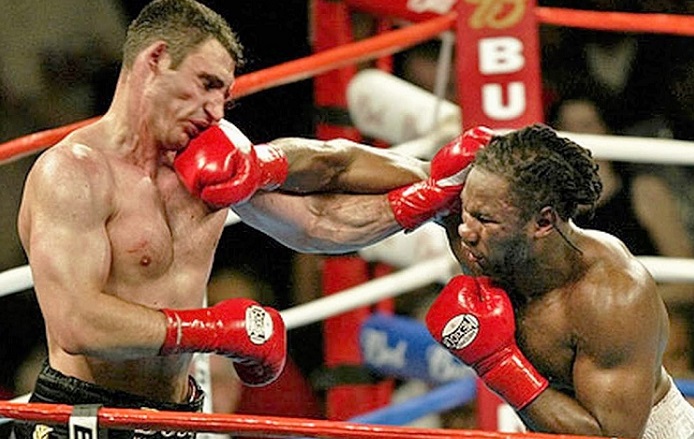 But in addition to all the blood, Vitali was notably fatigued and gasping for breath, and while still landing punches he also appeared ready to fall into the jaws of “The Lion.” Fortunately for Klitschko, the champion was clearly not in optimum condition either, as evidenced by Lennox throwing one punch at a time while allowing himself to be tied up in clinches instead of taking advantage of opportunities to counter. Lewis worked effectively in the trenches to start round five, catching Klitschko on the way in and digging to the body when the two were tied up. But then Klitschko began to dominate in the second half of the round, landing with enough regularity to make one wonder how long the champion could withstand the bombardment. 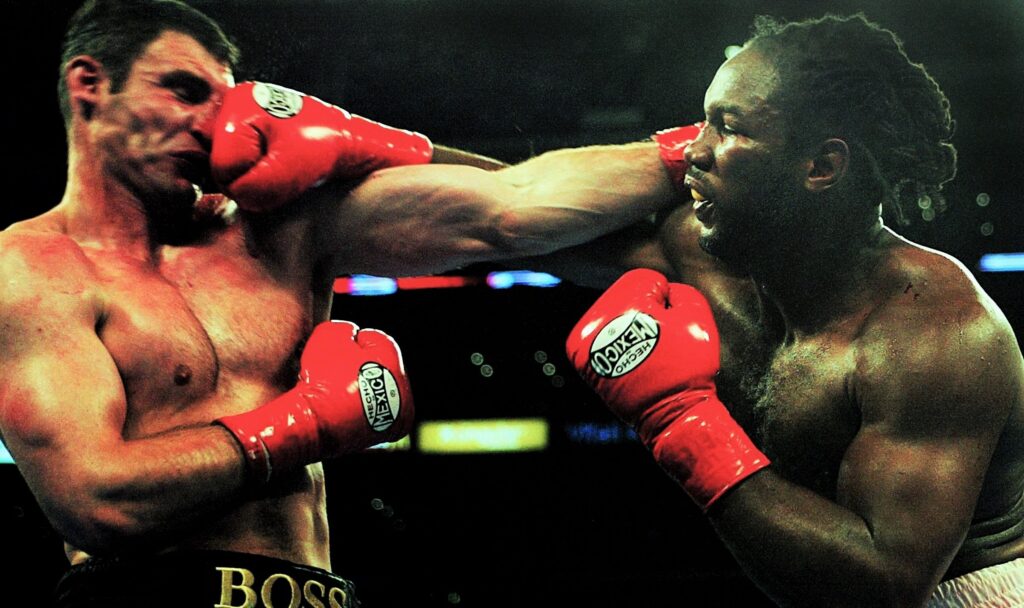 But the blood kept gushing out and Vitali’s corner had no solution for a wound that appeared to be getting deeper and deeper. The sixth featured more of the same, with Klitschko landing frequently, while seemingly without much power as the challenger grew increasingly fatigued. And while Lewis looked equally spent, he mustered up the energy to rip home a right uppercut that violently snapped back the head of “Dr. Ironfist ”as he tried to clinch. Klitschko not only survived the blow but fought effectively for the remainder of the round, though he appeared near the point of collapsing when the bell sounded to end round six. It appeared only a matter of time before someone gave way from sheer exhaustion. 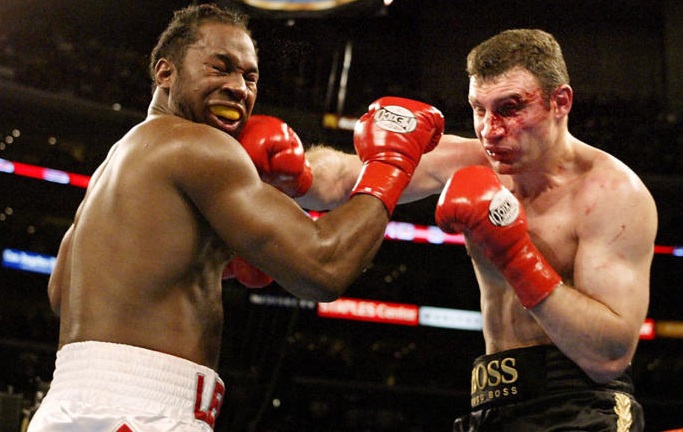 But Lewis vs Klitschko would not come to its natural conclusion, as the ringside doctor stopped the fight between rounds due to the challenger’s gruesome injury. Lennox was declared the winner by sixth round TKO, as an emotional Vitali protested the outcome, charging across the ring and shouting, even appearing on the verge of attacking the winner in stark contrast to his capitulation against Chris Byrd three years prior. And indeed, with his gutsy effort against Lewis, Vitali erased all lingering doubts about his heart and will to win.

With Klitschko ahead by a two point margin on all three judges scorecards at the time of the stoppage, a rematch appeared the obvious next move. But in the post-fight interview with Larry Merchant, an indignant Lewis stated that the challenger “would have been knocked out in the next couple of rounds.” Instead of a return, Lewis left Klitschko to feast on a sitting duck in Kirk Johnson, whom Vitali “harpooned” inside of two rounds. 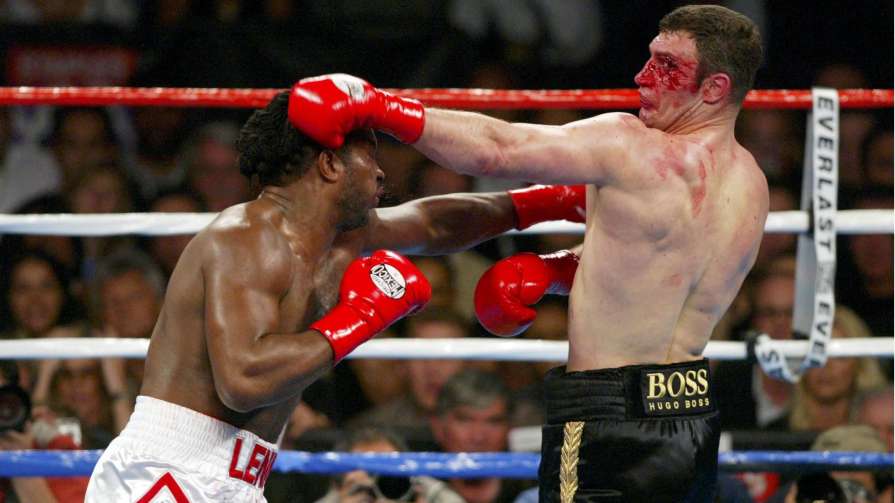 With the Tyson rematch now a distant hope given “Iron” Mike’s legal battles with Don King, Lewis vs Klitschko II was all that reasonably made sense for the champion to consider if he were to prolong his legendary career. But in February of 2004, Lennox formally announced his retirement, emphatically declaring, “Let the next era begin.”

While Vitali was clearly the best in the division following this departure, his run at the top would be short lived, his prime plagued by injuries that forced him to relinquish the title in 2005. Since then, boxing struggled through one of the darkest periods in heavyweight history. Instead of a “new era” of competition, it was a time of tedious, one-sided waltzes, with precious few challengers available to give Vitali’s brother, Wladimir, any kind of serious competition.

Perhaps Lewis’s decree would have been more appropriate for a future era, one that began in earnest more than a decade later when Tyson Fury upset Vladimir before the younger Klitschko went on to give boxing a truly great heavyweight fight in his showdown with Anthony Joshua. But as the legacy of Lennox Lewis takes its place in boxing history, the “big man” style of fighting he utilized to dominate has become the norm, with the heavyweight division increasingly populated by fighters of truly colossal dimensions. Suffice to say, giant-sized men like Fury and Wilder are not your grandfather’s heavyweights. – Alden Chodash

The special teams specialist could likely be back behind the Maple Leafs bench next season. If you have not been reading up on what's...
Read more
Technology

Microsoft Azure has certification paths for many technical job roles such as developer, Data Engineer, Data Scientist and solution architect among others. ...
Read more
Travel