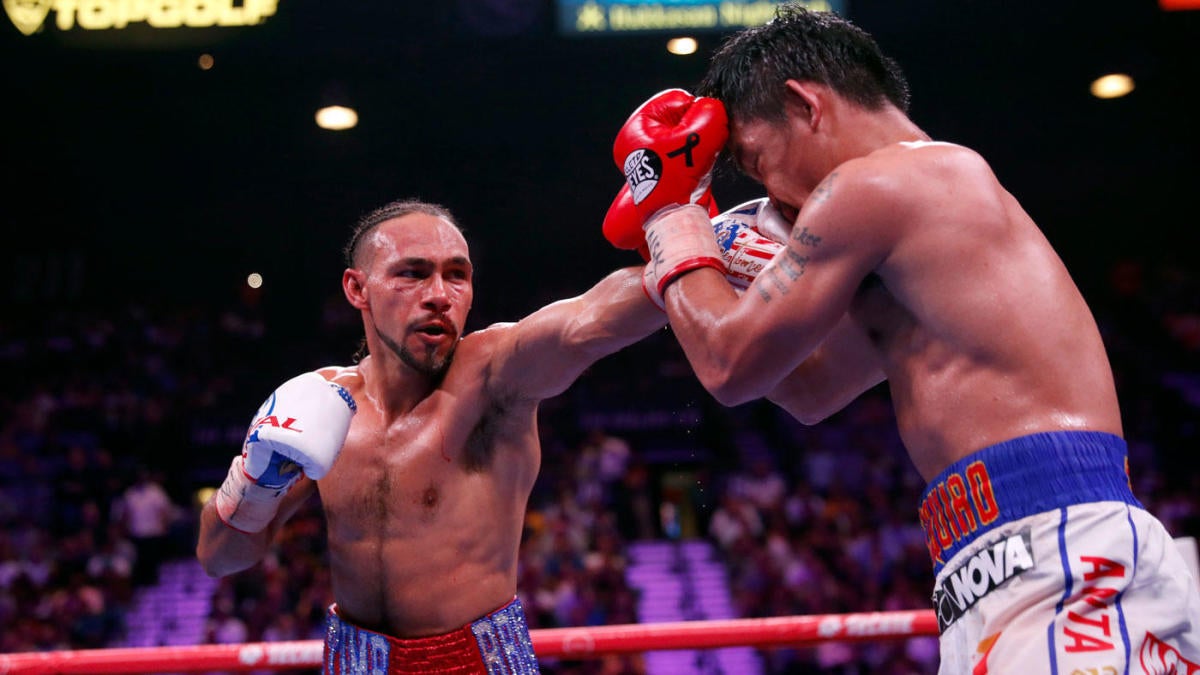 In a moment of self-reflection, Keith Thurman can admit the last five years of his career have gone in a direction that was anything but planned or expected.

One should not allow his penchant for speaking in the third person to distract from the fact that Thurman (29-1, 22 KOs) is capable of producing such an honest critique regarding the highs and lows of a pro career that began in 2007.

In March 2017, Thurman appeared to have it all. He had just unified welterweight titles by edging unbeaten Danny Garcia and was one fight removed from a career-defining victory over Shawn Porter in a 12-round thriller on national television. At 28, Thurman had the best active resume of the post Floyd Mayweather-Manny Pacquiao era in boxing’s money division at 147 pounds.

Thurman sat out nearly two years due to multiple injuries and returned in 2019 to stave off near disaster against Josesito Lopez in a comeback fight where he was badly hurt. Six months later, Thurman dropped a split decision against Manny Pacquiao in their pay-per-view blockbuster.

The fact that Thurman produced one of his finest performances to date in his lone pro defeat was somewhat hidden by him being dropped by the 40-year-old living legend. The subsequent layoff that followed it, as the combination of more injuries, a pandemic and the birth of his first child saw Thurman sit idle for 30 additional months entering this weekend’s return, created even more questions about his uncertain future.

Thurman, now 33, enters yet another comeback fight on Saturday in a Premier Boxing Champions PPV clash against Mario Barrios (26-1, 17 KOs) at Michelob Ultra Arena in Las Vegas (FOX PPV, 9 pm ET) as somewhat of a forgotten man as current titleholders Errol Spence Jr. (WBC, IBF) and Terence Crawford (WBO) have made the division their own in Thurman’s absence. The third 147-pound champion, Yordenis Ugas (WBA), even captured his title by sending Pacquiao to retirement last summer in the same manner Thurman had once predicted he would be the one to do.

Can’t get enough boxing and MMA? Get the latest in the world of combat sports from two of the best in the business. Subscribe to Morning Kombat with Luke Thomas and Brian Campbell for the best analysis and in-depth news, including an exclusive interview with Keith Thurman below.

Amid the constant critics questioning everything from Thurman’s oft-injured body to whether he has the heart to compete against boxing’s elite, the former champ could not sound more driven to remind the fight game of who he still is.

Thurman’s iconic ponytail may be gone in favor of a shorter, more dad-friendly look. But the same “One Time” swagger still exists.

“A lot of people think I’m distracted because life is pulling me in different directions but trust me, I’m a fighter through and through. I’m a warrior,” Thurman told “Morning Kombat” last week. “I chose this path and nobody chose this path for me. I’m excited and it’s right around the corner. We have been pushing hard and we are about to make that weight, baby!”

A victory over Barrios, the 26-year-old native of San Antonio who dropped a spirited PPV clash at 140 pounds against Gervonta Davis last June, should be enough to see Thurman return to instant title contention. But before he can get too far ahead of himself, Thurman had to make sure he came to terms with what transpired over the past five years in which he forfeited most of his physical prime.

“A lot of things that have happened, they are not ideal. They are not something you put on your to-do list,” Thurman said. “Let me not be in the ring for two-and-a-half years. Let me have elbow surgery. Let me have bone fusion surgery. These are things that manifested in my life and struggles that I faced. But hurdles are put there to jump over and overcome. I feel great at age 33. I might have missed two years of my prime but luckily we are still in our prime. “

Asked if he’s happy where he’s at in his career, Thurman did not skip a beat in delivering an emphatic, “definitely.” He was quick to point out all of the punches and unnecessary damage he avoided during his inactivity and believes it will help him stay fresher for longer.

As far as his opponent, who is moving up to 147 pounds for the first time, Thurman also knew there would likely be critics who questioned everything from Barrios’ choice to the decision making behind this being a PPV with a $ 74.95 price tag. His response was that his fellow elite names at welterweight were all tied up at the moment, which is a point that holds validity.

Spence and Ugas are targeting a spring unification bout while Crawford is currently a promotional free agent seeking a new deal. Garcia is pondering a move to 154 pounds while both Porter and Pacquiao have hung up their gloves for good. Because of that, the combination of Barrios’ exciting style and the fact that he has just one career loss made “El Azteca” an easy pick for Thurman.

“I always want to make the best fight I can make at a certain time in my career,” Thurman said. “I can keep my head up [because], at the end of the day, my resume can go head to head with anyone. I’m still one of the most qualified fighters, with or without a belt. I’m a champion and people know that. There were no big names being offered. The other fighters were respectable fighters but they have like four losses on their record. What does that do for Keith Thurman? ”

Thurman’s critics have not been limited to media or online fans, however. Davis, one of boxing’s young rising stars, dismissed the idea in November of moving up to welterweight to seek a fight against Thurman by saying “he’s getting old at boxing” and “his time has passed.” Jaron “Boots” Ennis, a 24-year-old welterweight who appears to be the future of the division, also accused Thurman of rejecting an offer to fight him by claiming he had no idea who Ennis was.

“Look man, I live this. Nobody’s words can deter me from being who I am. I live this,” Thurman said. “I literally started boxing at the age of 7 and that’s 26 years in the game. You can talk about surgeries and inactivity but when you have the heart of a warrior like me, it always beats, ‘Fight game, fight game, fight game . ‘

Given how much the division has blossomed into his absence, the re-emergence of Thurman’s star into a loaded 147-pound field is a welcome one. But words are ultimately hollow in the face of action and Thurman will need to make sure against Barrios that his speaks loudly regarding the validity of his fighting future come Saturday.

Manchester City have been forced to release an official statement on Sunday evening, owing to unsavory scenes during the club's title celebrations. The...
Read more
NBA

It's time for a weekly look at the best, the worst, and the weird or otherwise notable — the Hungee — from the...
Read more
Load more