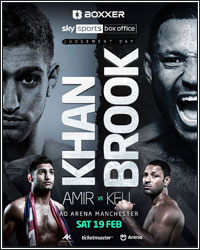 A British boxing rivalry simmering for more than ten years finally came to the boil on Saturday night at the AO Arena, Manchester as Kell ‘Special K’ Brook (40-3, 28 KOs) channeled years of antagonism to stop Amir ‘King’ Khan (34-6, 21 KOs) in the sixth round, the referee stepping in to save Khan from further punishment.

Speaking after the fight Brook said: “I’ve sacrificed so much time to train for this fight, they will not remember all of my fights they’ll just remember me fighting Amir Khan. No disrespect to Amir, but it felt so easy in there, I’m glad the chapter has closed on Amir Khan now.

“This is the icing on the cake in my career, I can feel at peace knowing I’ve beaten him. Do I want to carry on? I’m going to sit down with my family and consider my future in the sport.

“I would’ve wanted more of a clinical knockout, like how Canelo did. But he’s been fantastic for the sport, he’s a two-time world champion for a reason and I’m just happy that we got to fight.”

The night that fight fans have been waiting for proved its weight in gold as both fighters left everything in the ring on fight night. Brook, the former IBF welterweight champion, applied the pressure from the opening bell as he looked for every opening to hurt Khan.

The action unleashed in the very first round as Brook rocked Khan on his feet multiple times, the crowd reacting with awe as Khan then fought back to land hurtful punches of his own. Towards the end of the third, Brook attacked on the front foot sending Khan into the ropes and hanging on until the end of the bell.

Khan showed guts and resilience through the fifth round to stay on his feet following an onslaught from Brook, but again it was ‘Special K’ who was controlling the distance and the pace of the fight. The accurate right hand was reaching over Khan’s guard throughout the fight, and it proved to be the difference.

With both men coming into the fight with intentions of retiring each other, Kahn answered the question on his future in the sport following the defeat, he said: “It could be the time, I need to speak with my family. I just feel like I could not get in a groove, it’s something I need to think about.

“The better man won, he put on a great performance tonight and there’s no disrespect to him because he came out to win.

“It was one of the best atmospheres I’ve ever fought in, the fans came out to watch a great fight and they got what they paid for.”

Manchester played host to a night of British boxing that will go down in the history books.

Topping the undercard action, Natasha Jonas (11-2-1, 8 KOs) became the new WBO super welterweight champion with a brilliant second round stoppage over Christian Namus (25-7, 8 KOs) in the second round. The result sent the Manchester crowd into joy as Britain claimed another world champion.

The southpaw dropped her opponent towards the end of the first round with a perfectly timed right hook following a piercing straight left. Namus was not out of the dark for long as at the start of the second round, Jonas applied the pressure yet again, forcing the stoppage.

After world title defeats in recent memory to Katie Taylor and Terri Harper, Jonas can finally call herself a world champion after jumping up three weight divisions for the opportunity.

Earlier in the undercard action, 2020 Tokyo Olympic Games Team GB captain Frazer Clarke (1-0, 1 KOs) marked his debut in the professional game with an emphatic technical stoppage over Jake Darnell (0-1). Darnell’s corner threw in the towel in the first round after a barrage of vicious attacks from Clarke.

The 32-year-old starts his professional career in the heavyweight division in the perfect manner as the crowd lifted in jubilation as the pummelling blows landed.

Hassan ‘The Hitman’ Azim put on a dominant performance at the AO Arena, Manchester as he defeated MJ Hall (2-74-2, 0 KOs) via unanimous decision. The referee scored the bout 40-36 in favor of Azim.

Azim threw an assault of punches throughout the whole fight but struggled to land the critical blow to put away his man.

Like his brother, Adam ‘The Assassin’ Azim (3-0, 2 KOs) continued his young career in emphatic fashion on the night as he floored Jordan Ellison (13-36-2, 1 KOs) with a leaping left hook in the third round.

The 19-year-old showcased stylish ring dominance in the fight as he used the jab to set up an array of attacks upon his opponent. Azim dropped Ellison at the end of the first round with a brutal body shot and targeted the body throughout the fight, telegraphing the knockout punch in the process.

Manchester’s own Brad ‘The Sting’ Rea (12-0, 5 KOs) sparked a frenzy in the AO Arena, Manchester as he knocked out Craig McCarthy (8-1-1, 2 KOs) in the first round with a left uppercut that landed perfectly on the traveling Irishman.

Rea who is training out of the Ricky Hatton gym, proved his worth as one of the most exciting British fighters in 2022 with his slick and powerful boxing ability. The unbeaten 23-year-old will be itching to get back in the ring again as the domestic middleweight division continues to heat up.

Viddal Riley (5-0, 2 KOs) marked his first fight under the BOXXER banner with a stylish unanimous points victory over Willbeforce Shihepo (25-14, 18 KOs). Riley floored the Namibian in the first round with a brilliantly timed right uppercut, however, Shihepo showed heart as he lasted the scheduled six rounds.

The referee John Latham scored the bout 60-53 Riley, which proved to be a successful night for the cruiserweight who was fighting in the United Kingdom for the first time in his young professional career.

The featherweight from Bolton came close to getting his man out early as he dropped the Liverpudlian Starkey in the first. The bout was scored 40-35 Khan by the referee.

Opening the card, Ibrahim Nadim (6-0, 0 KOs) continued his unbeaten record as a professional with a dominant points decision over Taka Bembere (1-23, 1 KOs) in the super bantamweight division.