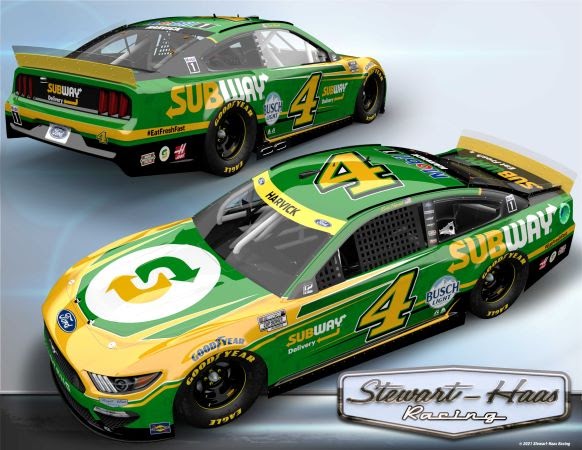 ● Subway® restaurants has joined with Kevin Harvick and the No. 4 team of Stewart-Haas Racing (SHR) to put its Eat Fresh Refresh ™ on the fast track by becoming a primary sponsor of the championship-winning NASCAR Cup Series team. The world’s largest quick-service restaurant brand is leveraging the partnership to highlight Subway Delivery powered by DoorDash, which allows guests to order their Subway favorites via the Subway app or on Subway.com. Guests can earn and redeem Subway MyWay® Rewards points on Subway delivery orders as well. In conjunction with Harvick being in the NASCAR Playoffs, Subway has a $ 0 Delivery fee on all Subway Delivery orders plus a 15 percent discount on a footlong for a limited time when using promo code KEVIN15. Subway will return as the primary sponsor of the No. 4 Ford Mustang for the Oct. 24 race at Kansas Speedway in Kansas City. Subway will also serve as a major associate sponsor of the No. 4 car Oct. 10 at the Charlotte (NC) Motor Speedway Roval, Oct. 17 at Texas Motor Speedway in Fort Worth and Oct. 31 at Martinsville (Va.) Speedway.

● While the NASCAR Playoffs have been in existence since 2004, it was not until 2014 that rounds were added, with three separate cuts whittling down the 16-driver field during the 10-race playoffs. After the first three playoff races, the four lowest drivers in points get eliminated. Then, after the next three races, only the top-eight drivers move on. Three more races follow, with only the top-four drivers advancing to the Championship 4 where they compete in a winner-take-all title match in the season finale. Harvick is in the midst of his 12th consecutive playoff appearance and his 15th overall. He has now advanced out of the Round of 16 in all eight editions of the current playoff format. Coming into this season, he had advanced all the way to the Round of 8 since 2014, and five times he competed in the Championship 4, winning the NASCAR Cup Series title in 2014.

● Harvick comes into Las Vegas on a three-race top-10 streak, a run punctuated by a strong second-place drive last Saturday night at Bristol (Tenn.) Motor Speedway where he led three times for 71 laps. Before finishing second at Bristol, Harvick finished eighth Sept. 11 at Richmond (Va.) Raceway and fifth Sept. 4 at Darlington (SC) Raceway. Harvick has finished among the top-15 in the last nine races, a streak that began July 11 with an 11th-place result at Atlanta Motor Speedway.

● Harvick’s win at Las Vegas in March 2018 was his 100th career victory across NASCAR’s top-three national touring series – Cup, Xfinity and Camping World Truck. He has since scored 19 more Cup wins to bring his tally to 119 total victories – 58 in Cup, 47 in Xfinity and 14 in Truck. Only three other drivers in NASCAR history have surpassed 100 wins across NASCAR’s top-three series: Kyle Busch (222 wins), Richard Petty (200 wins) and David Pearson (106 wins).

● Harvick has a total of 12 top-10s at Las Vegas, the most of any active NASCAR Cup Series driver. Kyle Busch, Brad Keselowski and Joey Logano are next best with 11 top-10s apiece.

● Harvick has made three Truck Series starts at Las Vegas, earning two top-10s with a best finish of eighth in 1997.

Sudbury, ON - As theis 2022 Championship season continues along, we are ecstatic to welcome the 100th year of the Ontario...
Read more
Sports

Mike Rizzo got a two-year deal, which included a club option for 2023 in late 2020, after the Nationals won the...
Read more
Load more