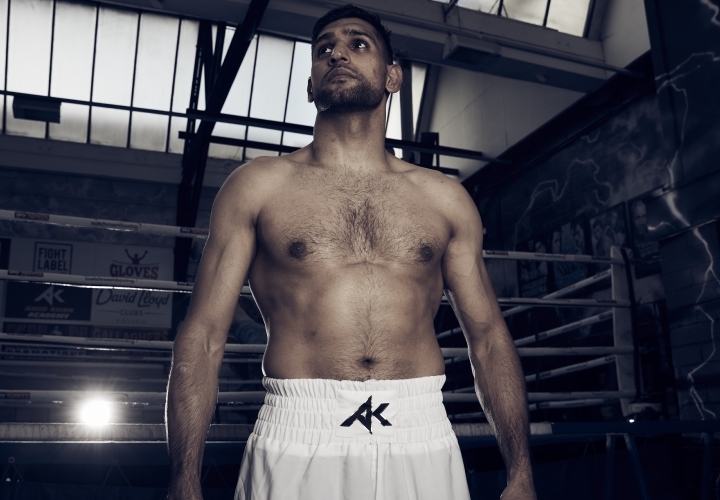 It was a sad sight.

Well, sad for me at least.

Looking at a press conference dais and seeing Amir Khan, hunched in a dark hoodie, the left side of his face swollen and abraded, his lips puffy and discolored, was difficult.

Not because I thought, at age 35 and more than two years on from his last ring appearance, that his days as a world-class boxer were anything but behind him.

And anyone who headed into Saturday thinking otherwise was delusional.

Still, there was plenty of reason to think that he’d exit a long-awaited grudge match with Kell Brook with something other than the look of a man who’d just been rolled into a back alley.

I do not know if I thought he’d beat Brook, who’d been more active – if only marginally more successful – in the last few years, but I did not think it’d be quite the one-sided mess it turned into.

And that’s what made me sad.

Because I was one of those guys who was all-in on Khan.

Or at least on what Khan could have been.

I looked back at his record on Sunday morning and was shocked to realize that it’d been more than 10 years – July 2011, to be exact – since he’d last walked out of a ring holding a world title belt.

In other words, it’s been a long time.

My son has gone from a frenetic 3-year-old to a gigantic (6-foot-1, 195 pounds) 13-year-old. The company name on my business card has changed six times. And only one of the fighters on Ring Magazine’s 2011 pound-for-pound list – Nonito Donaire – has won a fight in the last 12 months.

Nevertheless, when Khan exited the Mandalay Bay in Las Vegas that summer night after dispatching Zab Judah in five rounds – the same Judah who’d gone 12 with Floyd Mayweather Jr. and beaten a then-fearsome Lucas Matthysse – I was as sure as I could be that he’d be the next big thing.

Yes, I’m aware the record book shows that he lost five of his last 13 fights.

And I’m aware that four of those losses came by KO, perpetuating a career-long perception that he had the heart of a fighting champion but the chin of a brittle wannabe.

All of that’s true. But something else is true, too.

Had the chips fallen correctly and the matchmaking gods smiled upon him – in this case, meaning he’d landed a long-discussed bout with Mayweather for himself – his story would have ended better.

Because he’d have won the fight. Cleanly and decisively.

Not because he was a better fighter than Mayweather. He was not.

And not because he had a better career than Mayweather. He did not.

Rather, the reason he’d have been the guy to execute the blueprint in a way that 48 others could not was that he had the perfect style to get it done.

Though he stood just a half-inch taller (5-8½ to 5-8) and had a reach that measured shorter by an inch (72 to 71), he fought far taller and longer than a combat-averse “Pretty Boy” and had advantages in both hand and foot speed. He’d have been able to fight at range enough to force Mayweather out of a defensive shell, or, if that did not happen, peppered him with consistently point-scoring combinations.

And as for the bombs dropped on him by Prescott, Garcia, Alvarez, Crawford, and Brook?

They would not have been nearly as threatening coming from Mayweather, who, though a good enough puncher to record 27 KOs in 50 wins, was rarely the kind to lay a guy out with a single shot unless he’d been beaten down across several rounds or was ill-advisedly looking in a different direction.

Lest anyone forget, it seemed close to happening for a while.

In the aftermath of a second close defeat of Marcos Maidana – whom Khan had beaten unanimously four years earlier – Mayweather went guns blazing at a post-fight press conference, laying the foundation for a potential matchup had a still-rumored duel with Manny Pacquiao not materialized.

“When Amir Khan was an amateur, I was champion,” Mayweather said.

He was. But when push came to shove, it never came together.

Though he made time for Maidana, Robert Guerrero and Andre Berto both before and after Pacquiao, Mayweather opted-out of a chance to share a ring with Khan – even though he had as much or more belt-toting street cred and was a bigger- money attraction than anyone in the lower-profile trio.

And just in case you’d suggest it was promotional obstacles and not a calculated decision that kept Mayweather-Khan from happening, it’s ironic that “Money’s” tirade that night in Vegas was in response to questions about a still-unsigned Pacquiao fight in which he could not resist a jab at the Filipino.

“You guys can keep asking the same question over and over again. You’re going to get the same answer, ”he said. “My business model is I’m my own boss. If Manny Pacquiao took the same approach he would be where I’m at. It’s obvious he’s not doing something right. ”

And four months after that, it was a retirement party with Berto.

Mayweather called his own shots. But Khan never got a call.

Instead, he handled Devon Alexander in his first fight after Floyd’s exit and beat Chris Algieri in early 2015 before making the ill-fated decision to rise two weight classes to face Canelo.

Khan was a limp noodle in Round 6 of that match, then left the stage for two years before returning for consecutive defeats of middle-tier foes Phil Lo Greco and Samuel Vargas. From there, he advanced to a one-sided, six-round beating from Crawford at Madison Square Garden in April 2019.

That, for all intents and purposes, was the end.

For the record, ex-featherweight Billy Dib was his final victim just three months after the Crawford fight, falling in four rounds in Saudi Arabia in an older, slower Khan’s last outing before the scrap with Brook.

And all that’s left after this time around?

“I’ve had 40 fights, winning two world titles, fighting in America and around the world,” Khan said afterwards. “I need to sit down with my family. But it’s more towards the end of my career. The love for the sport isn’t there anymore.In the ring, I did not have excitement and that push.

“That’s maybe a sign that I should call it a day.”

He’s right. But it should have ended differently.

Thanks for nothing Floyd.

Fitzbitz says: It’s a perfect “trap fight” possibility for Taylor, who’s far more accomplished and has bigger targets in the future. But he’s on that level for a reason and he’ll get through it. Taylor in 10 (95/5)

Fitzbitz says: Okolie is a work in progress and probably has a future planned for him at heavyweight. He has a tricky nut to crack in Cieslak but should win out with pressure and power. Okolie in 10 (80/20)

NOTE: Fights previewed are only those involving a sanctioning body’s full-fledged title-holder – no interim, diamond, silver, etc. Fights for WBA “world championships” are only included if no “super champion” exists in the weight class.

Lyle Fitzsimmons has covered professional boxing since 1995 and written a weekly column for Boxing Scene since 2008. He is a full voting member of the Boxing Writers Association of America. Reach him at fitzbitz@msn.com or follow him on Twitter – @fitzbitz.