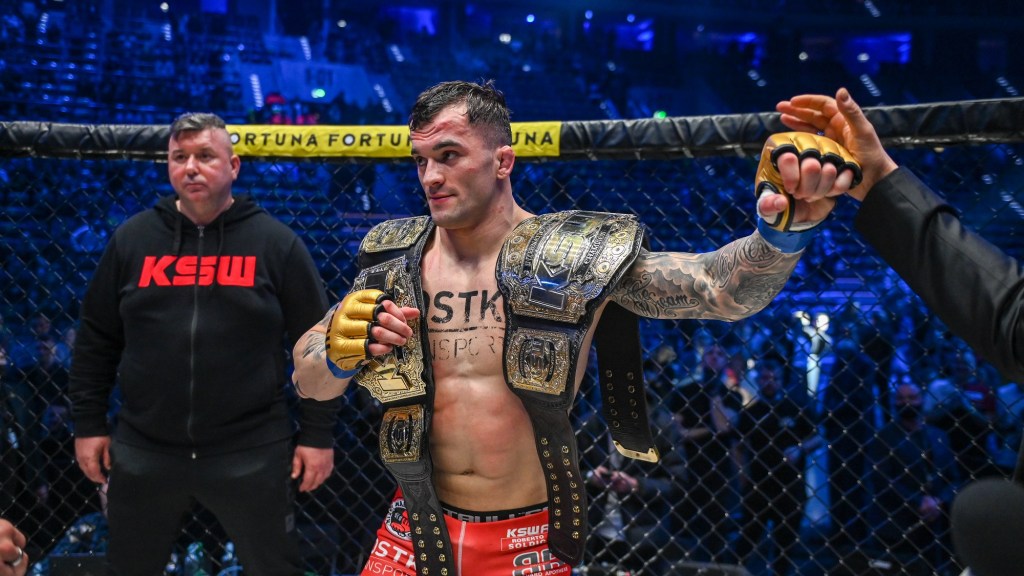 Roberto Soldic has one fight left on his deal – and he’s weighing his options.

Considered by many MMA diehards as one of the best fighters in the world outside of the UFC, Soldic (20-3) currently holds two belts in KSW, the promotion’s middleweight and welterweight titles. In 20 pro wins, he has 19 finishes – an all-action fighter.

The time is now for him to negotiate and while he is unsure what exactly will happen, Soldic spoke with openness in an exclusive interview with MMA Junkie. Simply put, it’s possible he renews with KSW, depending on the terms of the deal, of course. On the flip side, he glowingly spoke of the UFC and his lifelong dream to test himself in the promotion he calls “the best in the world,” – so that is a potential option, too.

Despite his success in the European powerhouse organization KSW, which includes eight victories over fighters like Mamed Khalidov and Dricus Du Plessis, Soldic can not help but ponder what benefits would come from making the jump.

KSW, despite its localized popularity, unparalleled live production, and legitimacy in building great MMA talent, often does not land on the radar of international casual fans. However, talents who have jumped to the UFC in recent years, like Mateusz Gamrot and Du Plessis, have proven successful.

“People always think it’s all UFC,” Soldic said. “… It’s hard to explain. UFC is UFC. It’s No. 1. When I started MMA, we watched UFC. This is (the) dream. When I go in America, when I spar with the guys, they know what KSW is but nobody watches it. In Europe, they follow a lot. … We have really good pay-per-views and really good public full of fans (in) the arena. Everything is good because we live in Europe and it’s a European organization. But in the UFC and in the USA, the world watches. You can be a big, big star – a superstar. In Europe, you have one maximum and that’s it.

“People give me respect but also they do not because, ‘Who fights Roberto? What is this guy? What is KSW? What is this? ‘ Go in the cage with KSW fighters and fight. … One time, one day, when I go to the UFC, nothing will surprise me because I see everything. Some guys love you. Other guys, they do not because they say, ‘UFC is the best,’ for example. Or, ‘Go to PFL.’ But most of them, they respect me and my country. That’s enough for me. ”

One way or another, Soldic predicts he’ll return for the fight he owes KSW sometime around July. He’s actually ready to go as-is, injury-free coming out of a second-round TKO against Mamed Khalidov in December. On the same card, multiple competitors called him out earlier in the night. Among them were contenders Michal Materla and Ibragim Chuzhigaev, the latter of which is rumored to be next.

“I want to fight also with (Conor) McGregor and everyone, but who am I?” Soldic laughed, at the callouts. “Stay in the line and we’ll see what’s next. I also needed four years for this chance that I fought with Mamed. I do a really good fight and now I have this position but we will see with this Ibragim what they offer. People call me out. People call me out also on Instagram – everywhere. It’s normal. ”

Whether it’s in KSW, UFC, Bellator, PFL, or elsewhere, Soldic is confident he can compete with the best. Just because a fighter does not have the international recognition of a UFC star, does not mean he or she is any less elite, Soldic indicated. He’s certain he can compete with who the public perceives as the best in the world – at either welterweight or middleweight.

“I’m 27, so I have six or seven years for work,” Soldic said. “I’m in a good position and I believe in my punches and everything. I know that where I throw the left hand, the kick, the right jab, when I throw, it’s hard. I give problems in the cage. I do not have fear with anyone. I train with Gegard Mousasi and he’s top, top level. I know what he can do. He told me, ‘You will be UFC champion.’ I say, ‘Wait. First, contract. ‘

“I know the American people, they like to talk. But I want to first (get a) contract. Then I will show myself in the cage and give people what they want to see: knockouts. They like to kill people with one punch. ”

Check out the full interview below:

Wolves'season has fizzled out after a promising start, but they can still have a major say in the Premier League title race this...
Read more
Load more