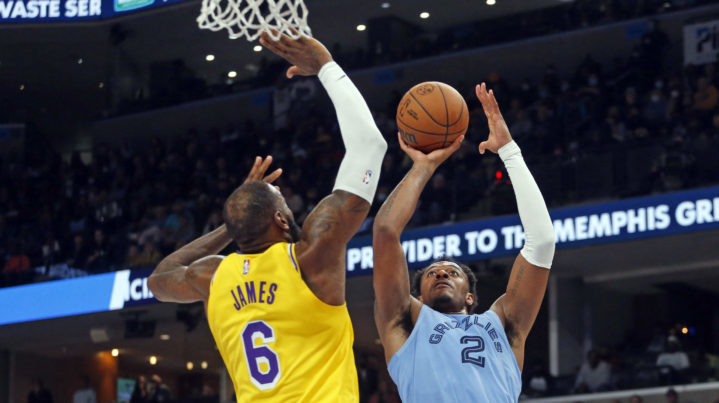 First, the good news: the Lakers won their last game, beating the Rockets after narrowing their range and docking their boat off the coast of No Big Island. LeBron started at Center, neither Dwight nor DeAndre played a minute, and team ended up playing Melo and the recently signed Stanley Johnson most of the evening in the back fifth place. Quite the turning point for a team that started the season with DeAndre in the starting lineup alongside both AD and Bron in the lead. It was a much needed victory, no matter the circumstances, and although there were things I would have liked to have seen done better, I will take the result.

In other good news, both Austin Reaves and Kent Bazemore have cleared the NBA’s health and safety protocols. Neither of them will play against the Grizzlies (recovery / conditioning), but both should be available on Friday. That only leaves Ariza and Frank Vogel still in the minutes, which means this team is close to being whole again. Once that happens, the team will have to make some decisions about both Johnson and Darren Collison and whether they want to keep it and, if so, how to achieve it taking into account the fullness of the roster, but that’s a conversation for another day.

As for the Grizzlies, they are in the same place as the Lakers were a week ago in terms of health and who is available / not to play. In Brooks and Melton, they are among two guys who could start viable at SG alongside Ja Morant. In Merrill and Konchar, they are among two types of role players who have made positive contributions in more limited minutes this season. And then in Culver they’re under a guy who barely played, but had some good innings against the Lakers when these teams last played, mostly a hustle and bustle “trying hard” to chase 50/50 balls , run the floor, and defend hard.

So, although the Grizz still have a lot of their core men around – including both Yes and YYY – they are not a whole team, especially in the backyard. Adjustments will be needed in terms of their rotation and bewilderment of guys, especially if Tyus Jones is finally starting to start next to Yes because of all their absences. Related, how this team manages their forward rotation and how they deploy guys like Xavier Tillman, Brandon Clarke and Kyle Anderson, considering how much JJJ will play and that Adams will start, is also something to look at. Can the Grizz resort to big lineups that move Anderson down to SF? Can they play JJJ, Clarke and Tillman together in crowd series just to record minutes?

These questions are even more important and interesting in light of the shifts the Lakers have made against the Rockets and how much they have generally played smaller. Although I do not think LeBron will start at C against Adams (although anything is possible, I suppose), I do not think whoever starts at C (my guess will be Dwight) will play more than two innings. Which means a team full of greats (Grizz) will face a team full of guards / wings (Lakers) in a strange contrast of available talents and playing style. Which side gets the upper hand and which groups can succeed against their peers will be interesting to see play in real time.

In the big picture, however, this match will almost come down to the team’s stars and which duo can influence the game the most. On the Grizz side, Morant is a killer and if the Lakers play drop covers, they will die a slow death against Ja-rye and end up in the lane. JJJ will meanwhile mix between popping for 3s and diving / placing against smaller defenders. So my hope is that the Lakers conversion and stair vs. Yes mix to make him a passerby and then send doubles to YYY when needed to keep him off balance. So the hope is to limit their shot efforts and then hope your defense can be healthy enough to keep people like Bane and Anderson restricted enough to limit the Grizz offense over the course of a full night.

On the Lakers side, Russ and Bron will have to dictate the terms of commitment through pace and transition chances. They will have to spread the floor and run, space them out and try to get into the paint to finish against an emptied paint. They will also both need to hit some outside shots (especially Source), and lubricate the wheels so that those lanes can stay free. If both can have effective points-learning evenings, it will also help to place the role players (especially Monk and Melo) appropriately and, if they can be productive, give the team a chance to keep it close.

Lastly, the Lakers need to be better in the possession game. The Lakers will have to bounce back defensively, especially against the lines where Adams is in the game. He’s such a burden in the paint and he can get the Grizz extra chances that pick up over the course of the game and force the Lakers to win too much defensive possession. In addition, the Lakers need to protect the ball and avoid turnover. I know, I know … Russ is going to turn the ball around and you just have to live with it. But some of the mistakes he (and, to be honest, others) make can be avoided with better focus. The Grizz are dynamic enough in transition to really hurt the Lakers if their turnover is happy.

I’m not going to lie – I do not expect the Lakers to win this game. It’s a rugby player against a young and hungry Grizz team who will play hard. But LeBron has been playing amazingly lately and if the team can commit defensively and hit some 3s, they will have a chance. I’m interested to see what they have in tonight.

Where to look: 17:00 start time on Spectrum SportsNet and NBA TV.