Home Sports Make No Mistake, Both Cody and Brandi Rhodes Are Huge Loss for...
SportsWWE

Make No Mistake, Both Cody and Brandi Rhodes Are Huge Loss for AEW 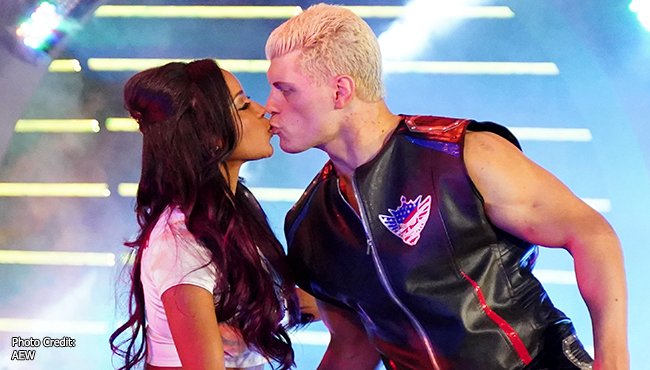 The world of professional wrestling is alive with buzz related to Cody Rhodes and Brandi Rhodes leaving All Elite Wrestling and perhaps jumping ship to WWE. What a time to be alive as a wrestling fan.

I’ve read and listened to a lot of Rhodes-related opinions over the last week. Some bonkers takes include “WWE does not need Cody” (they do) or “Cody can go to NWA” (why would he), but the one-take I have read about consistently this week is how Cody is “no loss to AEW ”. It’s an opinion that I have read on Twitter, message boards and listened to on hotshot podcasts from folks with usually decent, well-versed points of views.

Forget about booking narrative, or the money side of things, from a pure in-ring and storytelling perspective, both Cody Rhodes and his wife Brandi will be sorely missed as they depart All Elite Wrestling and their product as a whole going forward.

Over the course of AEW’s short existence, Mr. and Mrs. Rhodes have been a constant presence in Tony Khan’s company, excluding the time spent away related to their newborn child, the adorable Liberty Rhodes. They have been an ever-present component of what AEW represents, with Cody, in particular, being presented and viewed as a major star within the company. So when I hear that commentators and pundits are saying that Cody and Brandi are no loss, it blows my mind how you could think that both are not worth a lot of value to All Elite Wrestling. While Tony Khan has shrewdly set up his promotion to not be solely dependent on any one talent, Cody and Brandi will still be a loss.

Since day one, Rhodes has been one of the most selfless stars in the modern era. Many in pro wrestling wrongly suggested that Cody Rhodes and AEW was initially a vanity project set up to enhance the egos of Rhodes and other EVPs in All Elite Wrestling. Yes, Cody has the big entrance, the over-the-top presentation and the tendency to overindulge from time to time, but what Cody has done in AEW has not solely been for his own benefit. I’d argue that was the furthest thing from Cody’s mind.

If you look back at AEW’s career of Cody Rhodes, you will see a long list of unselfish acts. Look at his match with his own brother in 2019. Dustin Rhodes was not a marquee name, through no fault of his own, after years of misuse and underutilization in WWE. Cody, who arguably could have positioned himself to a higher profile match if he wished, chose to give his brother one last big dance to show the world that he was still capable of tearing the house down in professional wrestling.

That night at Double or NothingCody and his brother arguably stole the show and Dustin had his fire reignited, to the point that he can still have exceptionally good wrestling matches in 2022. Cody played a huge part in the rebirth of his brother’s wrestling career.

But yeah, you could argue that it was all to massage Cody’s ego with a big side of nepotism. So, for argument’s sake, let’s say I’m wrong about Cody in this instance.

A virtual unknown to the mainstream wrestling world. An indie hit sensation that was fairly new to the bright lights of televised pro wrestling. Cody played a huge part in getting Darby over. Their series of matches were not only extremely entertaining and told a compelling story, but Cody made Allin look like a star. Without Cody, would Darby Allin be as big a star today? Probably not. Did Cody have to work with the younger talent? No, of course not. But he wanted to. Just like his old man Dusty enjoyed giving exciting talent a break, Cody appears to revel in helping younger talent get better. Cody had to sit through awful takes at the beginning of this feud “oh he buried Darby” or “Oh, Cody putting himself over, what a shocker” but when the story was all said and done, Darby was elevated and in a better place than before the program began, and Cody played a huge role in that.

Cody did not stop there.

While MJF was clearly a future star, Cody put the Long island shit talker on the map. Whether it was long-game storytelling, the epic match or the beautifully violent angles in between (I’ll never forget the lashing segment), Cody put Max on his level and generously shined him up to the point he was viewed as an upper card talent. Did Cody do all this for his own ego? Perhaps, but how benefited more from getting 10 of the best belt whips on international television? Sure, Cody looked great in this, but MJF and AEW looked like a million bucks thanks to this epic feud and Cody was the lead here, make no mistake.

The TNT title run is an example of how vital Cody is to AEW. He took a mid-card title and made it worth something. But more so, how many talents did Cody get signed because of these matches? Starks, Jungle Boy Allin, Eddie Kingston? All enhanced by the rub with Cody and in Kingston and Starks case, signed off the foot of these matches. Imagine AEW without Eddie Kingston?

And the late Brody Lee, arguably a made man after his match with Cody.

Lee, who came in so cold during the pandemic, was in my view struggling to connect with the audience following years of being viewed as a mid-card nobody in WWE despite being a pretty darn good performer. Cody selflessly jobbed out to him in the most memorable squash match in years. Who else would offer themselves up to put another wrestler over so lightly?

Even in his last act, allegedly not under contract, he had a career-making ladder match with Sammy Guevara. People will take about that springboard cutter from the top of the ladder for years to come, similar to how Edge spearing Jeff Hardy was 20 some years ago, and while Sammy will get the plaudits, Cody took that move like a champ and unselfishly gave Sammy the biggest moment of his young career.

Sure there are others in AEW that put young talent over. Punk is doing it with MJF currently and Bryan is giving rubs to the likes of Lee Moriarty, but no one will perhaps come close to Cody’s passion and selflessness for creating new stars off the back of his own name. Make no mistake, he will be a huge loss. AEW may cope without him, especially with the list of talent that has joined in the last six months, but there will be a big Cody-shaped hole in AEW going forward.

But what about Brandi. She’s no loss, right? Wrong!

Whether you like her or not, and I suspect most fans do not, Brandi has been a draw for AEW. She, in my own uneducated opinion, has been one of the few women to connect with fans. She’s got more personality and verbal charisma than most of the females on the roster, she gets reactions from crowds and usually, her segments are hot from a crowd perspective. Britt Baker and Jade Cargill (a woman who also hugely benefited from the Cody rub), l may be the only woman close to her from a star presence perspective.

Yes she is divisive and polarizing, and maybe you do not enjoy her presentation, but Brandi has whatever IT is. You may not enjoy her recent segments with Dan Lambert, but they keep eyeballs on the product and provide an ingredient that AEW may lack from time to time. She probably generates more discussion, whether good or bad, than perhaps any other talent on the AEW roster. Without her, the women’s division and AEW as a whole will be a little duller going forward.

Let’s be realistic though, Brandi is not a huge megastar in professional wrestling. Her departure will not be anywhere near the same level as her husband’s. But Brandi has played her part when needed over the last 3 years. Forget about the Nightmare Collective faction that was quickly dropped when it was apparent it was a bad idea, Brandi has added value to the AEW product. She was a nice supporting player in the MJF lashes angle, as well as the Lance Archer feud while also being an instigator in the Shaq story and Cody’s Lance Archer feud.

Brandi has plenty of value.

AEW may adapt to their departure and others may attempt to fill their shoes, but I’m in no doubt that the exit of both Cody and Brandi Rhodes will be a huge loss long term for All Elite Wrestling.