Home Sports MLB Manfred and the MLB owners are either very bad at their jobs...
SportsMLB 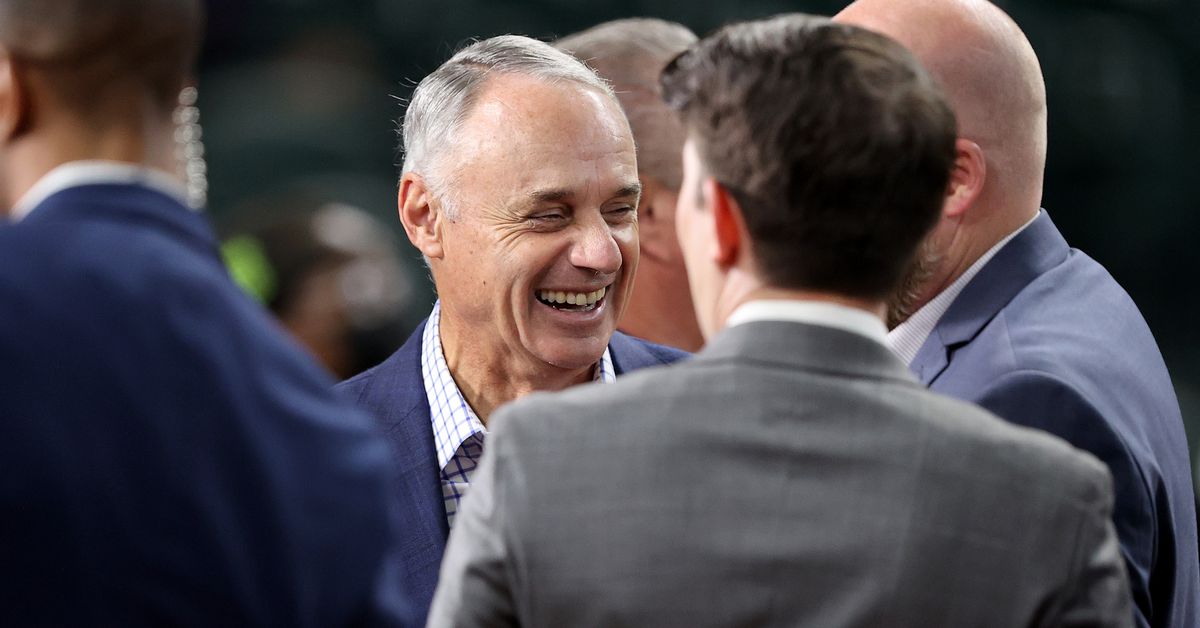 A negotiation is a fragile thing. In order for a negotiation to function at a bare minimum, both sides must do so in good faith. More succinctly, both sides must be committed to reasonable discussions and to reach a reasonable deal. Unfortunately for everyone involved, the league and the owners are refusing to engage in basic negotiation and sure do seem to be outright lying about their intentions.

If you’ve been paying even a little bit of attention to the Major League Baseball offseason, you know that the new Collective Bargaining Agreement negotiations have been the opposite of smooth — crunchy? Chunky? Take your pick. It’s February, Spring Training is supposed to start soon, and The Athletic reporter Ken Rosenthal ended his in-depth piece on why said Spring Training is likely to be delayed with one succinct sentence.

A new CBA is not close.

Rosenthal published that sobering six word sentence on January 31. On February 4, the league threw their metaphorical hands in the air and released a statement that said they were seeking the assistance of a federal mediator to move things along (emphasis mine).

Our goal is to have players on the field and fans in the ballparks for spring training and Opening Day. With camps scheduled to open in less than two weeks, it’s time to get immediate assistance from the Federal Mediation and Conciliation Service to help us work through our differences and break the deadlock.

On a basic level, the league claims that they are interested in signing an agreement and getting back to work. They have been claiming this for a while. As you can read on these digital pages, the owners unilaterally and unanimously implemented a lockout of the MLBPA on December 1, a lockout that did not trigger automatically and was not necessary for negotiations to continue along with normal offseason activity. The league claims that they did so in order to accelerate negotiations (again, emphasis mine):

We hope that the lockout will jumpstart the negotiations and get us to an agreement that will allow the season to start on time … we are taking this step now because it accelerates the urgency for an agreement with as much runway as possible to avoid doing damage to the 2022 season … MLB is ready to work around the clock to meet that goal. I urge the Players Association to join us at the table.

But there’s a little hiccup in the league’s logic here. This is because the league had a proposal in hand from the union at the beginning of the lockout but did not bother coming to the union with a counteroffer until six weeks later.

In a negotiation, what each side says carries weight. But what each side does is significantly more important. Major League Baseball claimed from the beginning that they were ready to “work around the clock” and implemented a rather major step to “accelerate the urgency for an agreement,” but then turned around and promptly did the opposite actions required to back up their words . Such a divergence between words and actions either means that the league is either very, very stupid or lying very, very clearly.

It’s not hard to envision a scenario in which the league’s actions make sense. Let’s say the league came back with a counteroffer a week after implementing the lockout and negotiations continued from there. Let’s say that, after a month of negotiations that were going nowhere, the league then said on January 4 “Hey, you know what, let’s get a mediator in here.” That would make sense!

As it stands, however, the league said, “We’ve tried nothing, Doc, and we’re all out of ideas.”

What, then, is the league’s endgame? It seems obvious at this point that the league is comfortable with leveraging the threat of lost Spring Training games and a delayed regular season as a bargaining chip to get what they want. The owners and MLB are making the calculation that, when there are games to be played, the players will come under fire from the public, which will put additional pressure on the MLBPA to cave.

Additionally, they are also probably making the calculation that the average sports fan does not know what a lockout means and are therefore assigning blame to the players anyway for the offseason work stoppage (which is not even the correct terminology itself). And considering that a full 42% of participants in the Royals Review of survey are putting partial or complete blame on the players for the labor negotiations already, that decision sure seems smart.

Why, then, is the league digging in so hard? Ultimately, the central problem for these CBA negotiations is that the distribution of revenue is no longer equitable. There is no question that the league makes a lot of money and has grown immensely from a revenue perspective. Over the last few decades, however, the proportion of revenue distributed to the players has fallen.

This is a good visual representation of MLB estimated revenues via Forbes, the average Opening Day Payroll via the AP, and the CBT first tier. Graph pulled together by The Athletic. It tells the story: revenues vastly outpacing CBT and player salaries. pic.twitter.com/dxIwMZ4JeH

And while this does indeed mean more money for the very lucrative deals that make the headlines — deals that, in Kansas City, eclipse $ 50 million for the likes of Salvador Perez and Alex Gordon — most MLB players simply do not make that much money. The MLBPA’s data reveals that two out of five players who played at least one game in the 2021 season had career earnings under $ 1 million. Among that subset, the median career earnings was less than $ 360,000.

The players are smart, and they know the score. They aren’t asking for anything ridiculous. They know that the league is making more money than ever, and they know that the players who are getting the worst deal here are those who never reach free agency. Additionally, they also know that there are multiple reasons why teams aren’t spending money, and are committed to making changes to it. Max Scherzer and Whit Merrifield, their teams’ respective union representatives, said as much on Twitter.

We want a system where threshold and penalties do not function as caps, allows younger players to realize more of their market value, makes service time manipulation a thing of the past, and eliminate tanking as a winning strategy.

Based on the incredible annual revenue of the league, we feel players with 0-3 years of service should be better compensated.

However, at the end of the day, the players whose voices the fans recognize are well-paid stars. Unfortunately, many fans can or will not think of the Nick Heaths and Nick Dinis and the Sebastian Riveros of the world, the players whose lives would be permanently changed by an extra few hundred thousand dollars that their labor deserves.

Perhaps if the owners were more willing to back up their words with the requisite actions, the players’ position and proposals could warrant more scrutiny. But until that happens, we have one party who is willing to talk, who is eager to earn money they are due. The other party has not bothered to show up.

It has been a back end of the week filled with reports on the battle at quarterback to replace nine time...
Read more
Technology

Ever dreamed of getting Android apps from outside the official Amazon Appstore on your Fire TV device? You can, in a process...
Read more
SOCCER

How to Watch NBA Playoffs Conference Finals for Free on YouTube?

Fans are eager to find a way to watch the two NBA Conference Finals series for free, and YouTube is arguably the best...
Read more
Load more